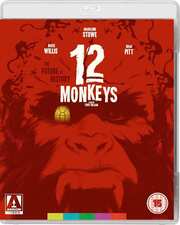 When I watched 12 Monkeys in the cinema back when it was released, it had a memorable impact on me, not least because we saw Bruce Willis as never before, and Brad Pitt as we’d never see him again, together in Terry Gilliam’s most commercial movie (still with no compromises for the profit motive). I always wanted to revisit the film, get it into my collection, but I could never really find the right mood. 12 Monkeys isn’t the kind of mass market, crowd pleasing blockbuster that you can just stick on with a bowl of popcorn at hand. But when Arrow Video gave the film their customary boutique treatment, that was enough to twist my arm and get me into the mood to watch a sci-fi film about a mutant virus plague that wipes out the human race. So in January 2020 I placed an order. I should have watched it then and there. I haven’t been in the mood to watch 12 Monkeys since February. It took me over ten years to watch Die Hard II again after 2001. I really need to be less sensitive about these things. So I’m going to watch a movie about a pandemic in the middle of a pandemic. 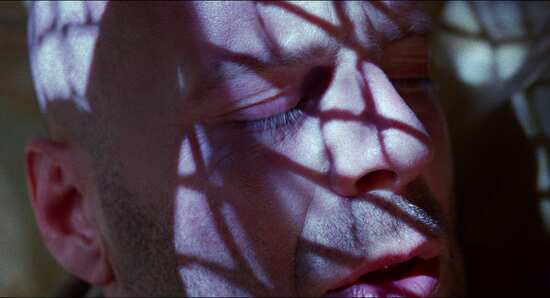 Following a plague that wiped out most of the human race, the few survivors live underground sealed away from a surface world now ruled by the animals and where the disease is still prevalent. James Cole is a convict who is volunteered for an audacious mission to the past, the year 1996 to find out how the plague started, and possibly retrieve a sample of the original virus. All so that future scientists can fashion a cure, so that humanity can reclaim the surface world, after all, history can’t be changed. The one clue they have is a voicemail message from the past, claiming that the Army of the 12 Monkeys was responsible for the plague. 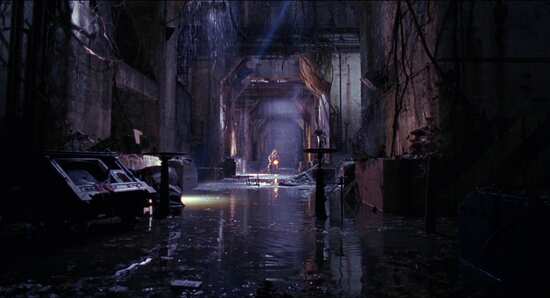 The problem is that the scientists miss the target, and send Cole back to 1990, where he’s taken to be violently insane. He ends up heavily medicated in a mental institution, where he winds up sharing his story with a fellow inmate, the hyperactive Jeffrey Goines, although he gets an unexpectedly sympathetic ear from psychiatrist Kathryn Railly. 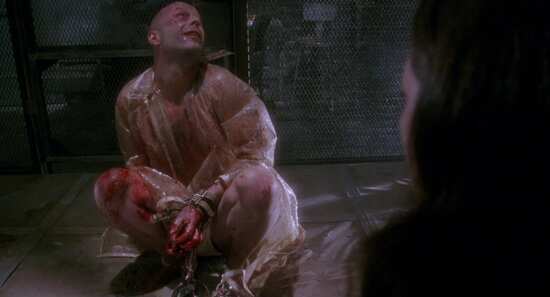 12 Monkeys gets a 4k restoration, supervised by director Terry Gilliam. This can be a good thing, if you get a director who isn’t too revisionist like a George Lucas. Thankfully the transfer for 12 Monkeys looks gorgeous. The image is clear and sharp, with excellent detail, great contrast, and a proper filmic level of grain. The colour palette is somewhat muted, making the most of the winter setting for the story. This all helps to appreciate the wonderful production design, the evocative locations and architecture, coupled with a typically Gilliam-esque retro-future, populated by a cast of grotesques. 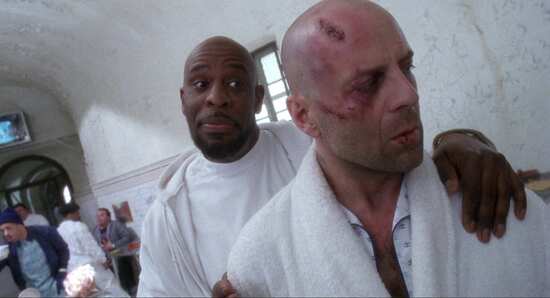 You have the choice between DTS-HD MA 5.1 Surround and PCM 2.0 Stereo English with optional English subtitles. The dialogue is clear throughout, while the surround is really effective, immersive and unsettling. The music really serves the story well, and is eclectic and effective. The film gets a curiously Gallic sounding theme that has a whimsy and lightness that counterpoints the darkly nihilistic tone of the story. 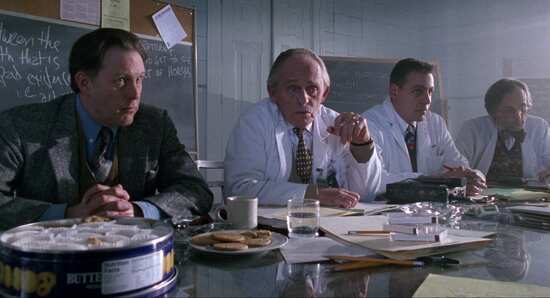 You get one disc in a BD Amaray wrapped in an o-card slipcover. The Amaray sleeve is reversible, giving a choice of cover art. Inside, on the first release batch, you’ll find a 44 page booklet with an essay on the film from Nathan Rabin, and an interview with Terry Gilliam from Ian Christie, and with plenty of stills and production art too.

With the film you get an audio commentary from director Terry Gilliam and producer Charles Roven. Judging by the comments, it’s taken from the laserdisc release. 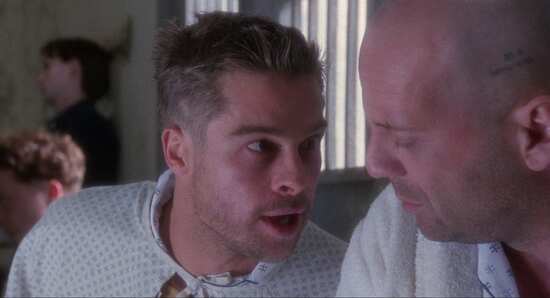 The Hamster Factor and Other Tales of Twelve Monkeys is a feature film in itself, given the tremendous journeys most Terry Gilliam movies take through production. The documentary is a behind the scenes making of, a fly on the wall, warts and all affair which runs to 87:34. 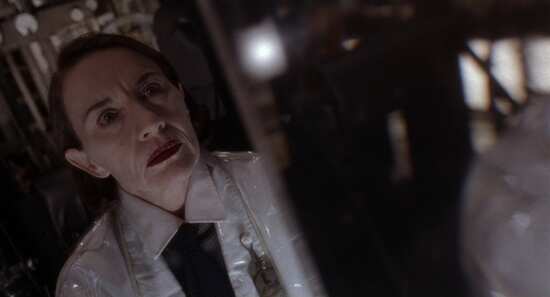 The Film Exchange with Terry Gilliam is a 23:50 interview conducted on stage at the 1996 London Film Festival.

The Appreciation by Ian Christie, author of Gilliam on Gilliam lasts 16:11. 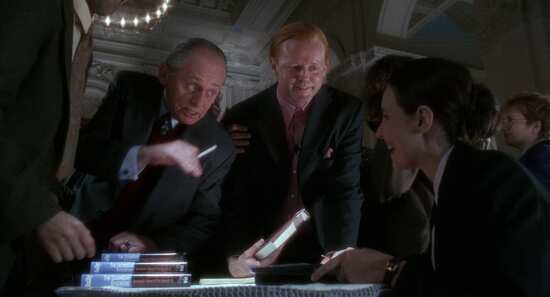 Finally the Theatrical Trailer runs to 2:26. While every video extra is presented in HD, they are scaled up from various source qualities. 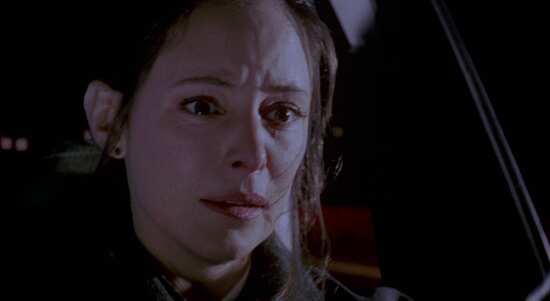 Seeing the dystopian post apocalyptic future that 12 Monkeys depicts is not the thing I really needed right now at the end of 2020. It’s less a fictional vision of the end times than it is a slightly distorted mirror to our reality, with political upheaval, climate change, and of course a global pandemic raging. The only difference is that 12 Monkeys might just be further along in the narrative. Trying to look past that, I can still see the brilliance and singular vision that so struck me when I first watched it, but it wasn’t the provocative jolt to my intellect that I so appreciated 25 years ago. The only thing that 12 Monkeys provoked was a deepening of the depression I’ve been nursing for the last 12 months. I really would have rated the film higher if it had still felt like fiction. 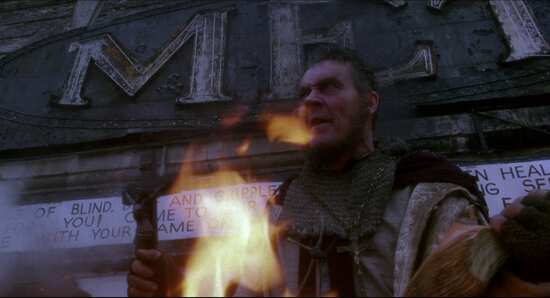 Terry Gilliam presents this terrifying vision of the future, a rundown world cobbled together from the detritus of the past, a handful of survivors underground, trying to find a way back to the surface by eliminating the virus that ravaged humanity. They somehow cobble together a way of travelling through time, but the only people ‘volunteering’ are convicts. The film offers one plausible explanation as to why we’ve never seen any time-travellers, assuming the human race will invent time travel in the future. They all get locked away as madmen, as happens to the film’s protagonist, James Cole when he arrives in 1990. Convincing psychiatrists of his ‘truth’ isn’t happening, but his tales do catch the attention of another inmate, Jeffrey Goines, which sparks the plot into motion. And given that Cole is locked up and drugged as soon as he arrives in the past, it immediately brings into question whether he’s actually from the future, or if he’s just delusional and insane. It’s a dichotomy that continues through the film, although never quite as ambiguous as it needs to be to get the audience questioning reality as much as Cole does. 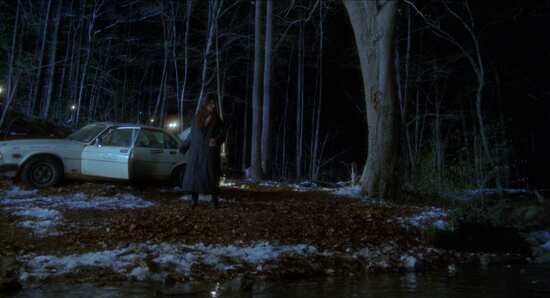 The film rests on two powerhouse performances, from Brad Pitt, as the hyper-kinetic unhinged Jeffrey Goines, slave to his stream of consciousness conspiracy theories, who nevertheless has enough charisma and authority to draw people into his delusions. At the other end of the scale, we see Bruce Willis, who to this point had either been the romantic comedy lead in Moonlighting, or reinvented as the wise-cracking action hero of the Die Hard movies. Here he’s broken, vulnerable and emotionally naked, yet possessing a childlike passion and nostalgia for a past that he barely remembers. 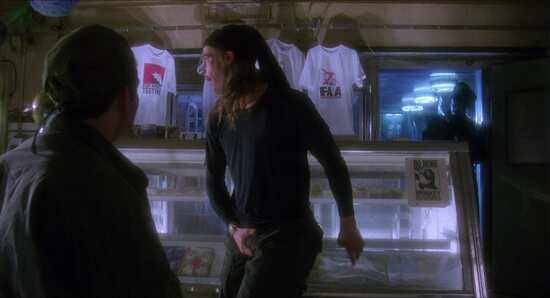 It’s as a sci-fi fan that I appreciate 12 Monkeys the most. It’s another film that reminds us that you can make excellent, provocative science fiction without blowing a budget on a ridiculous level of CGI. It’s hard to get time travel right in a movie without resorting to flow-charts and mind-bending convolutions of cause and effect. 12 Monkeys thrills me as it’s a time travel movie with not one, but two predestination paradoxes, both moving in opposite directions through time. 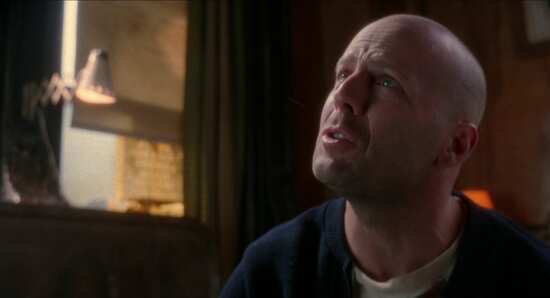 Arrow’s Blu-ray presentation is just what collectors have come to expect from the boutique label, a quality presentation with some carefully curated extra features. 12 Monkeys is a film definitely worth watching. Best to wait until after you’ve been vaccinated, eh?