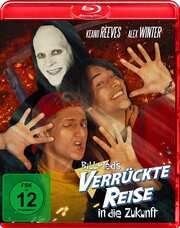 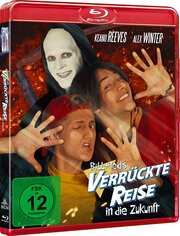 Something seems stuck in the Bill and Ted machine, although the likelihood that it’s all down to Covid can’t be discounted. This year, we have finally had the Bill and Ted Face the Music feature film released, in limited cinemas and for streaming. We’ve also had a new release of Bill and Ted’s Excellent Adventure with a new 4k scan. Fans of the franchise will no doubt be looking forward to the new film coming out on Blu-ray and UHD, but there’s one glaring omission from UK release schedules. The second film, Bill and Ted’s Bogus Journey has never had a Blu-ray release in the UK, and at the time of writing, it still isn’t on the schedules. It has been released on Blu-ray in other countries though, and I just had to have it to complement the first film. The US and Canada release is Region A locked, but fortunately it has been released in Germany as well from Koch Media. And while the film apparently did get a 4k restoration alongside Excellent Adventure, and this German Bu-ray did come out in August, it’s just a standard re-release of a 2018 Mediabook version, an old transfer based on the US 2016 release. 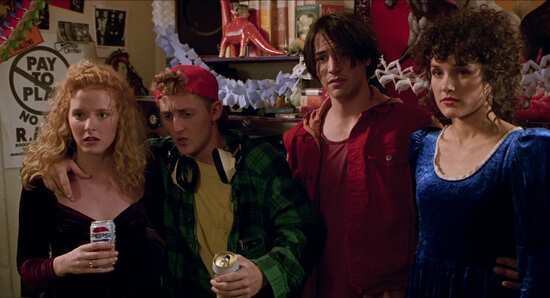 NOTE: And while this review was simmering on my hard drive, HMV announced an exclusive 3 film Blu-ray collection for December, which will have Excellent Adventure, Bogus Journey and Face the Music, although no news as to whether Bogus Journey will have a new transfer, or if there will be a UHD release for that matter. 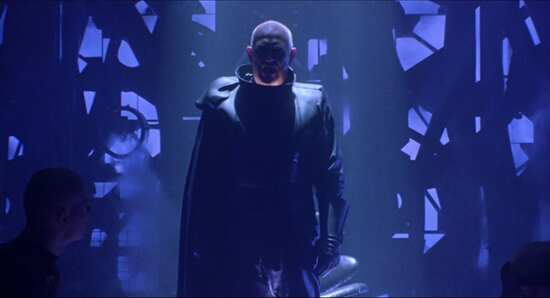 Bill and Ted may have passed their history test, and saved their band The Wyld Stallyns, but they still haven’t fulfilled their destiny and saved the world with rock and roll. They are on track though, with the forthcoming Battle of the Bands contest being televised; their one chance to bring their music to the masses, if they learn how to play. But it’s a key moment in time, one that a power mad villain is determined to turn in his direction. His plan is to send evil robot Bill and Ted facsimiles to the past, to kill the real Bill and Ted and replace their message with his own. And it turns out that being dead is the least of Bill and Ted’s problems. 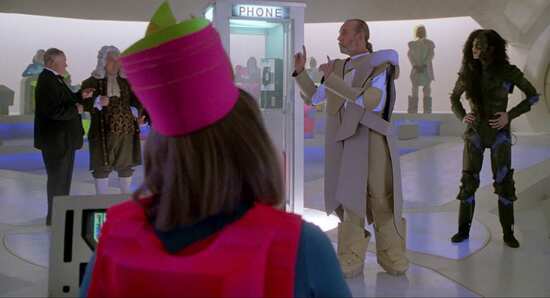 Bill and Ted’s Bogus Journey gets a 1.85:1 widescreen 1080p transfer with the choice between DTS-HD MA 5.1 Surround English, 2.0 Stereo English and German with optional English and German subtitles. There’s also a pitch shifted DTS-MA 2.0 German stereo track, which suggests that the original German was dubbed for a PAL DVD disc and slowed down for the 24fps Blu-ray. I went with the English surround track, which while not the original experience, certainly does well in terms of immersing you in the action, and broadening out the music, while keeping the dialogue centralised. The image is clear and mostly sharp, but it’s clear that this film needed the restoration. It’s properly filmic, with a nice layer of grain, and the odd moment of filmic flicker, but there are one or two soft moments, a little bit of dirt on the print, and an odd mix of saturated and muted colours (the future sequence costume design is still ridiculous). Bill and Ted’s Bogus Journey is good enough to watch, and a major step up over the DVD release, but it’s just that it falls short compared to the recent 4k restoration of Excellent Adventure. 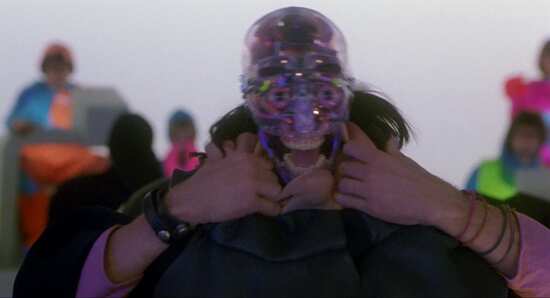 You get 1 disc in a thin red BD Amaray with a reversible sleeve to be rid of that giant German ratings logo. 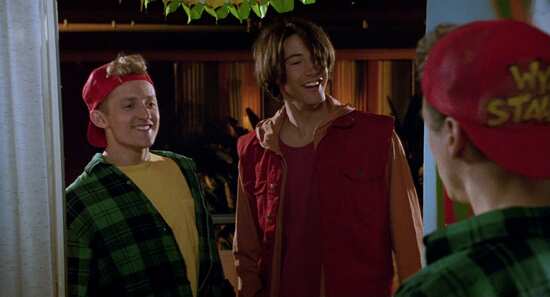 There are two commentaries on this disc, one from Alex Winter (Bill), and producer Scott Kroopf, the other from writers Ed Solomon and Chris Matheson. Both pick up where they left off on Excellent Adventure, and are just as rewarding to listen to. 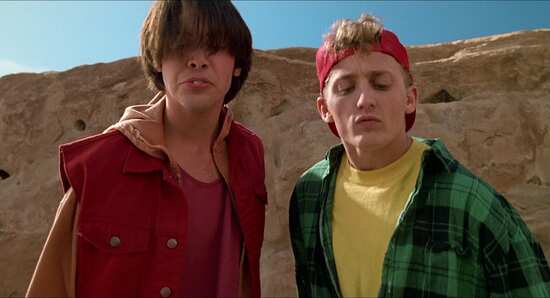 Bill and Ted Go To Hell: Revisiting a Bogus Journey is a making of featurette, once again continuing on from where the featurette on Excellent Adventure leaves off, throwing William Sadler (Death) into the mix of talking heads.

You get the Teaser Trailer (2:12), and the Theatrical Trailer (2:05); identical in all but aspect ratio, and a slideshow Gallery with promo art and stills from the film. 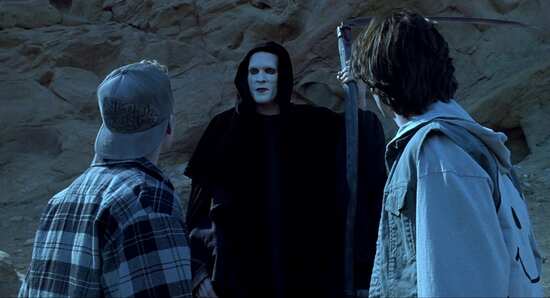 Bogus Journey hasn’t aged as well as Excellent Adventure, and you can hear much about that in the extras, especially the writers’ commentary. Excellent Adventure was a labour of love, and a surprise hit. The studios demanded a sequel, and this time Solomon and Matheson had a time limit to contend with. To their credit, they avoided the temptation, and the studio demand to simply remake the first film but in an English Literature class with fictional characters instead of History, and Bogus Journey really changes things up for the characters, sending them to the afterlife. But the road there is a well trodden and unoriginal one of heroes and villains, and a race against time to save the world. 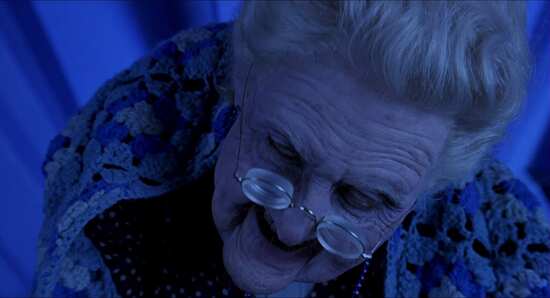 While Hell may be an interesting and entertaining construct in the film, heaven is less so, and it’s at this point the film starts to sag, especially with the introduction of Station, the alien scientist, and gag that fails to work. That leads to the messy climax where it seems they just threw everything at the screen in the hope that something would stick, the battle against the evil robots with hastily constructed good robots, the battle against the villain, De Nomolos (where they reprise the ‘whatif’ time travel mental chess game of the first film), and the song that will save the world which leads to the end credits montage which caused no little problem when it came to writing the new film. 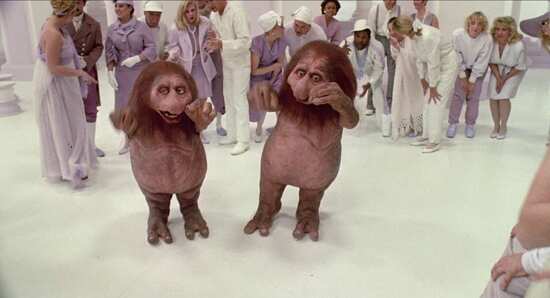 Bogus Journey does still entertain, and much of that is due to the goodwill generated by the first film. It’s impossible not the love the characters, and it’s fun to see them again, Bill and Ted’s fathers, Missy, the princesses, even Rufus whose role is more cameo than in the first film. It’s also a positive to see the evil Bill and Ted, who are recognisable as Bill and Ted, but twisted just enough to give them a goofy malice. And then William Sadler shows up as Death and steals the film. Bogus Journey is a lot of fun, replete with great and memorable moments, which actually do justice to the characters. It’s just that it fails to stick the landing. 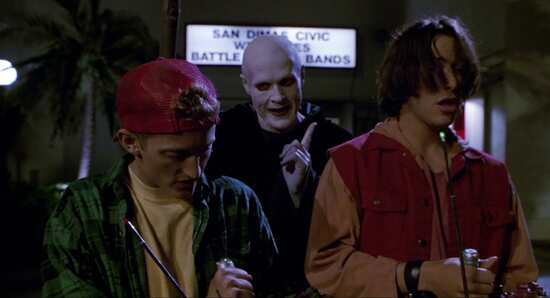 It might be worth waiting to see if Bill and Ted’s Bogus Journey gets the 4k treatment on home cinema, and we get an upgraded Blu-ray transfer into the bargain. After all, Face the Music’s home release is yet to be announced. But with Bogus Journey’s rights with MGM, compared to Excellent Journey’s rights with Studiocanal, it seems things with this franchise will remain a little haphazard in the UK. If you want Bogus Journey in your collection, this German release is certainly good enough when it comes to the extras, it’s watchable enough, and this standard BD release is also quite affordable.