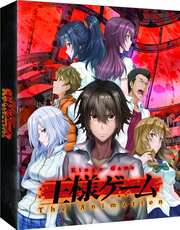 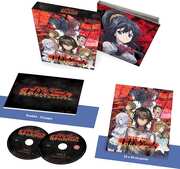 If there is one genre in anime that I feel sorry for, we’re talking genuine pity here, it’s the death game genre. Let’s face it, it never had a chance. I’ve seen quite a few at this point, Gantz, Danganronpa, Btooom!, and Mirai Nikki, shows where a group of people are forced to fight for their lives, usually against each other, in twisted, warped games created by an external agency, and all these shows have one problem in common. It’s Battle Royale of course. The live action feature adaptation by Kinji Fukasaku of the manga in 2000 was a mike drop movie. It set the bar at the highest point right from the beginning, and nothing since, not even its sequel have been able to match it. So when a new death game anime drops, I never approach it with optimism, just a weary question of just how bad it’s going to be. I’ve left off reviewing King’s Game for quite a while now because of this. 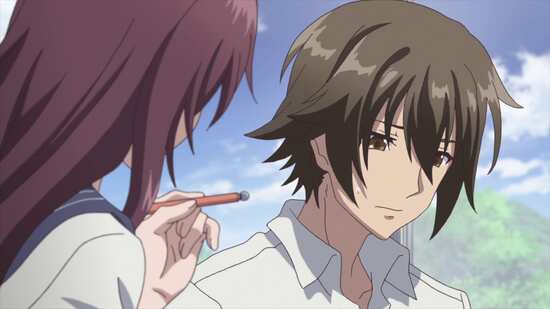 Nobuaki Kanazawa is the new kid in class, recently transferred in, although he’s not in the mood to make friends or interact with any of his new classmates. Still, the cute girl in class, Natsuko is almost aggressive in being friendly to him. Then one night, the kids in the class all get a text message on their phones, welcoming them to the ‘Ousama’ Game, the King Game. More benignly, the game involves one person being ‘king’ and able to issue orders to anyone else playing, which they have to follow or face a punishment. Only now, whoever, or whatever is texting the students is ‘king’, the orders are outrageous, and the punishment is extreme. When those students that didn’t reply to the first text are found dead by hanging, it becomes clear that this particular game is being played for keeps, and the winner will get the ultimate prize, survival. And it turns out that Nobuaki has been forced to play this game once before at his old school. 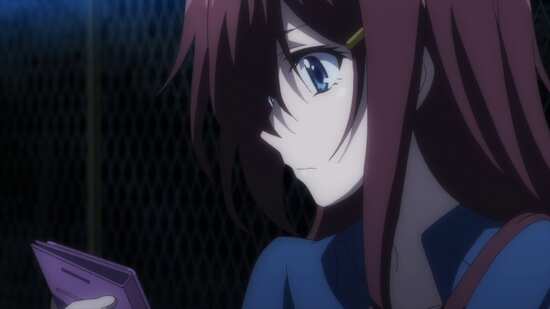 12 episodes are presented across two Blu-ray discs from All the Anime. 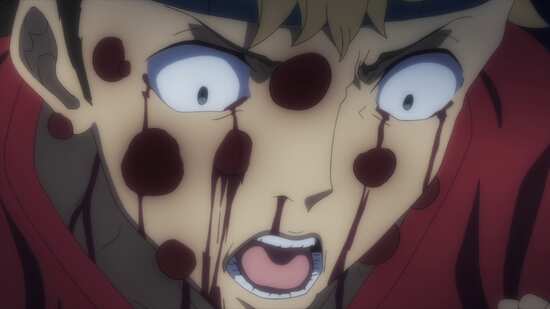 King’s Game gets a 1.78:1 widescreen 1080p transfer. There are no issues with the show’s presentation on disc, the image is clear and sharp, there’s no compression, no aliasing, little in the way of banding, and the animation, such as it is, is smooth. King’s Game is one ugly looking anime though, with simplistic character designs, a reliance on still frames that is excessive even for anime, and the animation, when it comes is crude and basic. It’s almost as laughable as the chocolate coloured blood, occasionally censored with a black smudge. It’s a gory, violent, and brutal story that looks nothing as gross as it should, which is probably a good thing for the BBFC rating. 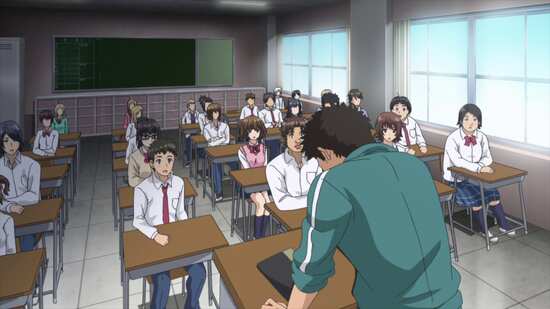 You have the choice between Dolby TrueHD 5.1 Surround English and 2.0 Stereo Japanese with subtitles and signs locked during playback. The audio is fine, the dialogue is clear, and the subtitles are timed accurately and are free of typos. The show gets the requisite, wacky-creepy music, and it all works as it should. 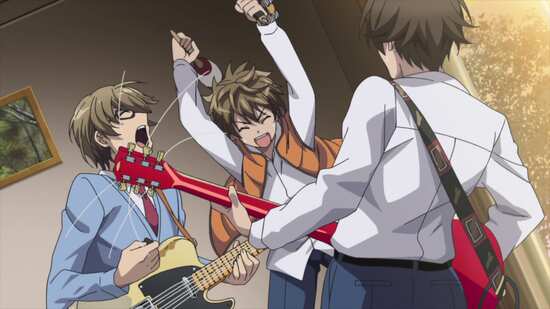 Disc 1 autoplays with a trailer for Re:Zero

Disc 2 autoplays with a trailer for Danganronpa: The End of Hope’s Peak High School. 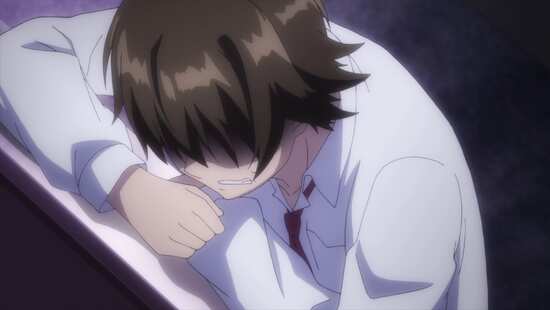 You also get the textless credits and further trailers for Mirai Nikki: Future Diary, Assassination Classroom The Movie, Deadman Wonderland and Attack on Titan S2 on the disc. 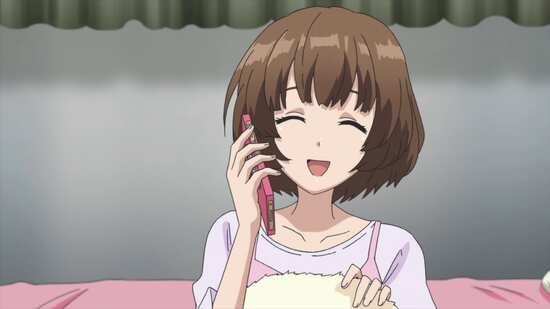 I have seen some dross in my time. There’s anime that I sincerely wish that I could unsee, anime where I lamented the time I had spent on it, and anime that I just slept through. We’re talking travesties like Master of Martial Hearts, or Samurai Deeper Kyo, Fight Iczer III, and Oreimo Season 2. These are anime which can still have me waking up in the middle of the night in a cold sweat, despite the fact that I have sworn never to watch them again. King’s Game might be worse. It might be the worst anime I’ve ever had the misfortune to watch. 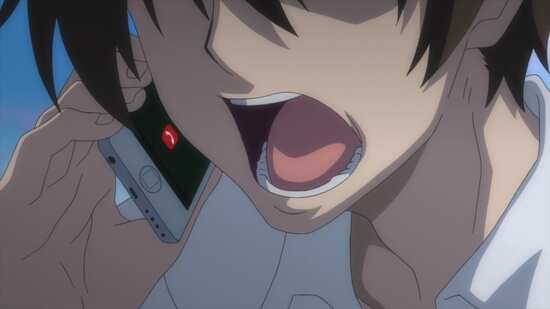 It’s not the look of the thing, although the animation is poor, the character designs simplistic, all to the point where you’d think this was a show from the nineteen-eighties, not the 2010s. The premise is flawed at inception, and the execution is inept and confusing. You have the main character, Nobuaki, along with his class, put through the wringer of this death game, but it’s quickly established that he went through it all before at his previous school, and he relates all of this to whoever is sympathetic enough to listen in the form of flashbacks. So a class of thirty-odd in a death game, interspersed with flashbacks to another class of thirty-odd in a death game, and with no time to really get to know any of the characters before they start being bumped off en masse. Not only don’t you know whether you’re in the past or present, you don’t even care. 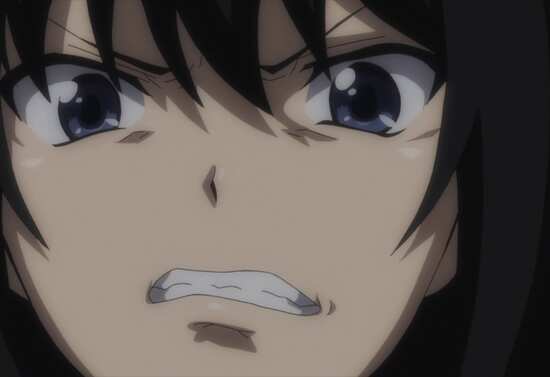 Also, the premise is infuriating. It’s a death game with a supernatural cause, but with no rhyme, reason or intent. Usually when there is some extra-normal force behind the game, you get to see a personality or some sense of motivation, and in something like Battle Royale, there is a tangible, if twisted motivation behind it all. But in King’s Game, kids suddenly start getting texts on their phones, ordering them to torment each other, or face the punishment of death. Why? There’s some talk about the history of the game, some ludicrous idea that it started off as a biological virus that turned into a computer virus, but none of that explains why someone’s head just twists itself off the body. There needs to be some kind of logical consistency behind the premise, no matter how fantastic it is, that the audience can buy into. King’s Game is just making it up as it goes along, which makes it impossible to suspend one’s disbelief. 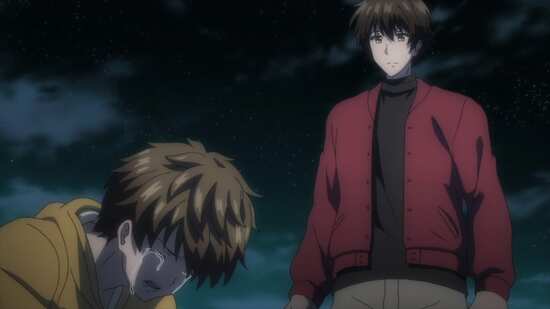 These are such fundamental flaws in the show that it’s already resident in the dustbin of history, but I could also point out my personal pet peeve of cute, nice, adorable girls that turn on a sixpence into crazy bunny-boilers, with warped anime psycho faces. And to the show’s credit, I was almost interested in it after the penultimate episode, had a twisted desire to see how it ended. Now, no matter how bad you think this show will end, the reality is worse. It’s the ultimate let down. The characters learn of the one way out of this nightmare, they take that route, yet the show ends on a ‘To Be Continued’ with the whole thing starting up again with a new bunch of characters. 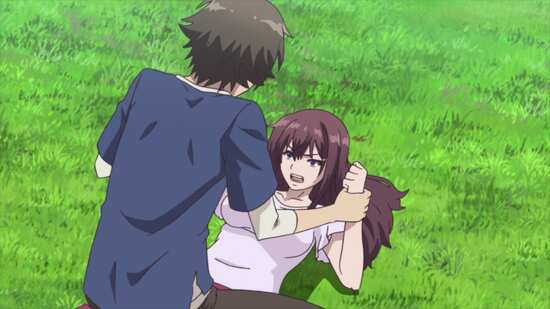 Dear God! King’s Game is the worst anime I have ever seen. I had to give it a mark, because zero isn’t an option on the review scale. Sometimes when reviewers slate a product, you might suspect them of hyperbole. Some shows are defiantly, enthusiastically bad, and I’ll admit that there is a lot of fun in slating them. I had no such fun here. This is the badness of all-encompassing incompetence, nothing to relish at all. Some people can also take negative reviews as a challenge. I know I have bought several movies and shows on the strength of a bad review, just to see if I could handle the pain. You won’t be able to handle King’s Game. If you watch this, you only have yourselves to blame.