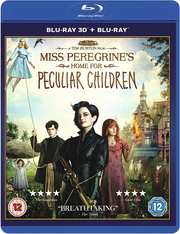 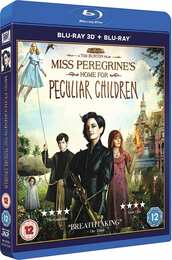 Here’s a quick reminder to go looking for 3D Blu-rays, even if like me you’re only after the 2D version of a film. Most of them have the 2D disc in the case, and given the demise of the format (people were only going to bear those glasses for so long), you will most likely find 3D versions of the film much cheaper than the 2D version alone. 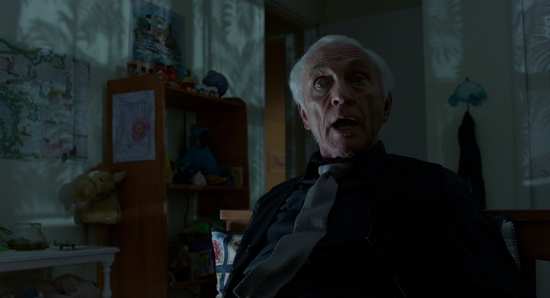 It wasn’t just the price that attracted me to this film though; it was the name of the director, Tim Burton. However I did raise an eyebrow at the claim that this was his best film in 20 years. The last two decades couldn’t have been that poor, surely? Then I checked IMDB, as you do, and it turns out that the last Tim Burton film that I watched was 2001’s Planet of the Apes, which probably explains why I haven’t seen any Tim Burton films since then. That was a pretty painful burn. The last film from the director that I enjoyed was Sleepy Hollow, which came out two years previously. Even though this film was made in 2016, for me it really has been 20 years since I last saw a new Tim Burton film that I liked. And in case it isn’t clear, I’m reviewing the 2D version. 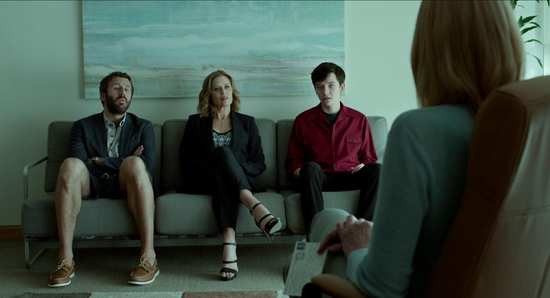 Jake grew up doting on his grandfather Abe, kept rapt by his far-fetched tales, which he insisted were all true. Of course now that he’s a teenager, he takes those fish stories with a pinch of salt. But an ominous phone call from Abe sends Jake to his home, only to find Abe mortally wounded, and a strange, giant creature apparently responsible. Before he dies, Abe tells Jake to go to the island from his stories, near Wales, the children’s home he told him of, where the ‘bird’ will explain everything. But when he gets to the island of Cairnholm, the fabled children’s home is a ruin, having been destroyed in a bombing raid during the war. But then Jake sees some of the children from his grandfather’s stories. 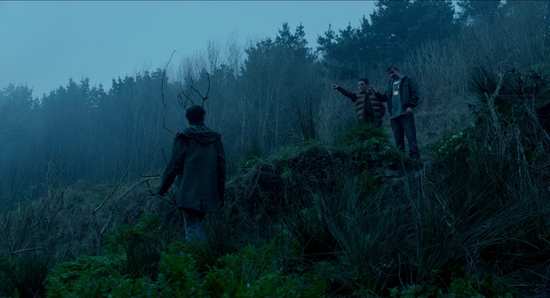 The film gets a 1.85:1 widescreen 1080p transfer with audio in the form of DTS-HD MA 7.1 Surround English, Dolby Digital 5.1 Surround English Audio Descriptive, Spanish, French, Portuguese, Ukrainian and DTS 5.1 Surround Russian, with subtitles in these languages plus Danish, Finnish, Norwegian, Swedish, Estonian, Lithuanian, Latvian, Hebrew, Icelandic, and Korean. It’s another impeccable transfer, clear and sharp, with a nice, vivid, Tim Burton colour palette. The production design is a delightful aspect of the film, while the effects sequences and action comes across without any seams showing. I can be just as effusive about the audio, with the surround bringing the action and music of the film across well, while leaving the dialogue clear throughout. 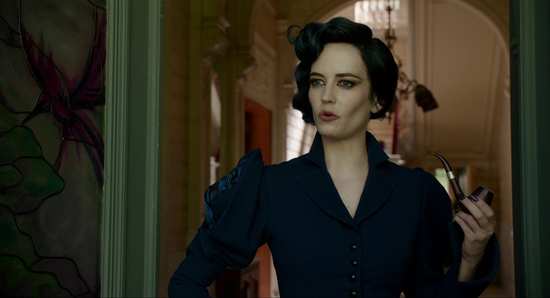 You get two discs in a BD Amaray, with one on a centrally hinged panel. For what it’s worth, there is a UV code as well. The disc boots to an animated menu.

The Peculiar Story lasts 12:51 and is the usual making of, although this time there is a lot of input from original author of the novel, Ransom Riggs. 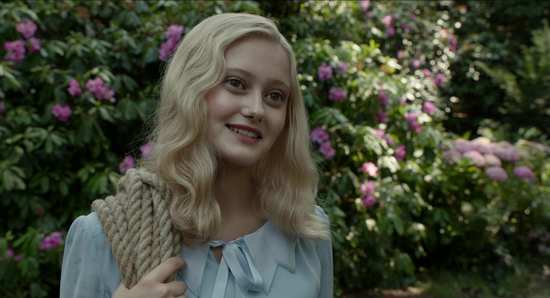 The Peculiars gathers 15 featurettes looking at the characters in the film, which in total run to 64:54.

Hollows and Ex-Hollows does the same for the villains, in one featurette running to 9:24. 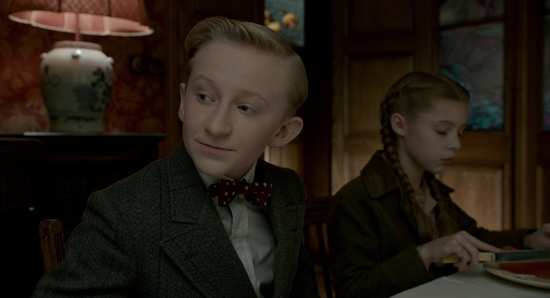 Map of Days looks at a couple of key locations in the film; two featurettes lasting 17:40.

There is a music video of “Wish You Were Here” by Florence and the Machine lasting 2:18. 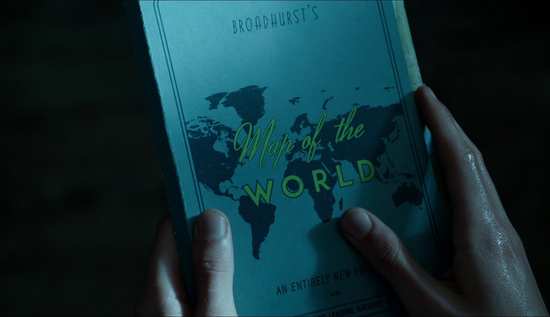 There are photos and sketches to look at in a couple of Galleries.

And finally there are two trailers for the film. 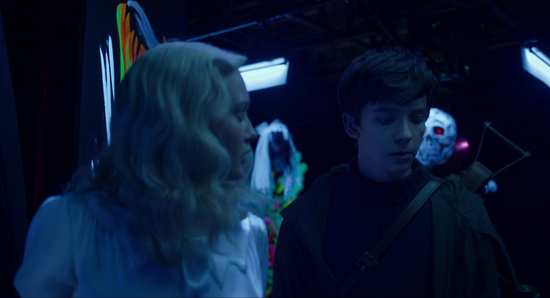 Tim Burton made an X Men movie! Mutant abilities become Peculiarities, Professor Xavier’s mansion becomes Miss Peregrine’s Home, and the Sentinels now eat children’s eyes. Take any movie or genre, and put it through the Tim Burton directorial box of magic, and you wind up with something, dark, quirky, individual, and quite stylish, and Miss Peregrine’s Home For Peculiar Children is no exception. It is a Grimm fairy tale version of a superhero movie. It’s really quite fun with it too. 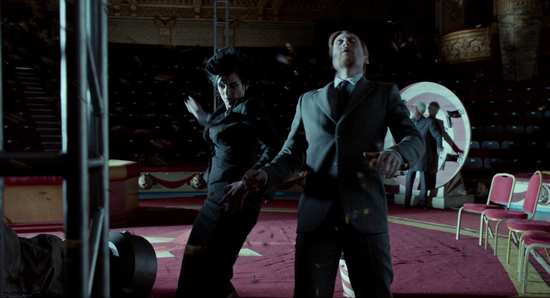 Jake is a normal teenager, but his grandfather’s fantastic stories take on a serious, real edge when he is attacked and killed. On that night, what Jake witnesses makes him realise that these weren’t just yarns that his grandfather was spinning, and he’s compelled to find out more of the truth with his grandfather’s dying message. What he finds is the children’s home, complete with children and their eccentric governess Miss Peregrine, hiding away from the world, never aging, and never changing. 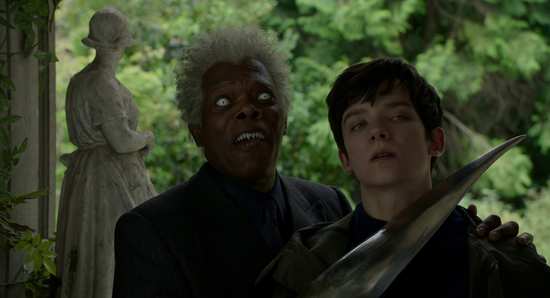 These people with Peculiarities, powers and abilities that make them stronger, or more isolated, hide away from the human world that would treat them as different, seeking out and inhabiting a never changing idyll. With their abilities, you’d think they would be safe, but it turns out that there is a foe that bears them malice, other Peculiars who craving more and more power, have dabbled in forces they can barely control and comprehend, turning some into giant ominous monsters, and some into much, much worse. They prey on their own kind in a misguided attempt to regain their humanity, which gives added reason for the Peculiars to remain hidden. It’s into this conflict that Jake stumbles when he finds Miss Peregrine and her charges, a conflict that his grandfather had been fighting for years. 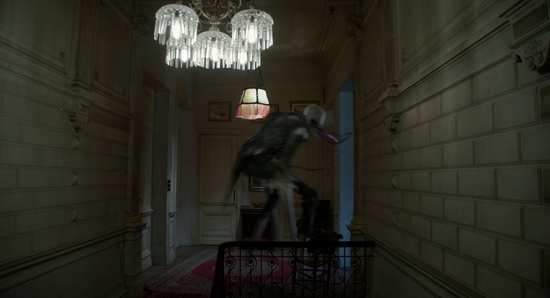 What made me blink was the age rating on the film. The BBFC have given it a 12 rating, no doubt for the oodles of eyeballs consumed in the film, but in terms of tone, in terms of character, and atmosphere, it really is a fairy tale, a fantasy in the vein of Roald Dahl, a story that will most definitely appeal to children of a wider age range. The 12 rating seems to deny the target audience that would appreciate it most, as the more fantastic elements would lose their appeal with older audiences. Of course for the cinema release, it was given a 12A which avoids that issue, and is a reminder of just how much of a fudge the 12/12A rating is. One thing I do recognise is that the film thrives on uneasiness, on not letting the viewer settle until the very end. When Jake discovers the Children’s Home, the children are almost ghostly, and other, while Miss Peregrine herself is not quite human in her manner and her personality. It takes a long time before these characters feel like protagonists, and the Home feels like the safe welcoming harbour to Jake that it does to the other children, by which point it’s practically too late. That sense of always being off-kilter, or some fundamental truth being obscured contributes much to making this film feel creepier and more unsettling than many so called horror movies. If there is a problem, there is a time-travel element to the film, and as so often happens, unless it’s logically watertight, you can be left picking nits and plot holes after the end credits, which in this case does detract from the story. 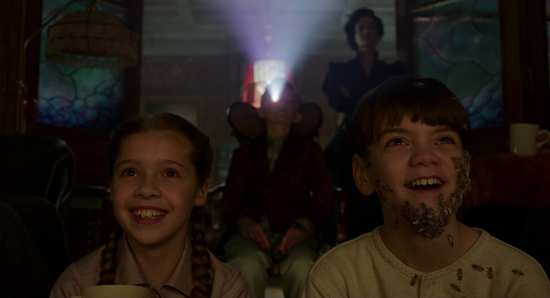 Miss Peregrine’s Home For Peculiar Children is the kind of children’s adventure movie that kids will love, but have adults wondering if it’s really that suitable for them. Those are the best kids’ movies!