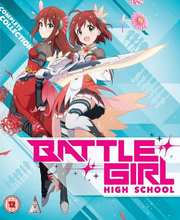 There are questions that need to be answered. Which came first, the chicken or the egg? What’s the meaning of life, the universe, and everything? Is there life before conception? Donald Trump? What do you get when you cross a school idol show with a magical girl anime? One of these questions has an answer now. Battle Girl High School takes a cast larger than that in Love Live, throws in a few song and dance numbers, and gives the girls magical transformations and fighting abilities to keep the world safe. I feel so much better ticking that conundrum off the list. 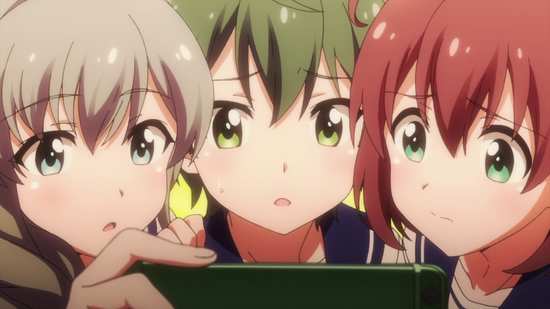 A little cut and paste from the show’s official blurb can explain the premise far more effectively than I can.

“Mysterious invaders have attacked the Earth! As the Irousu roam the conquered lands, mankind has been driven back, but there's one last weapon that may still turn the tide: super-powered schoolgirls! 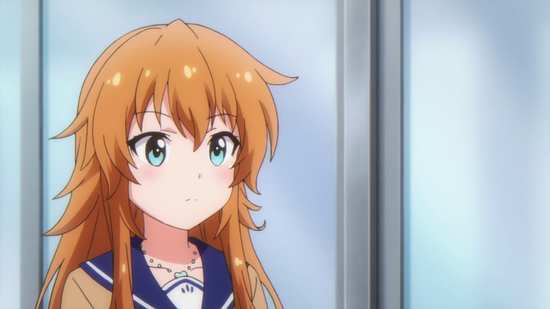 At schools like the Shinjugamine Girls Academy, elite classes of Star Guardians alternate between regular schoolwork and learning to kick Irousu behind. It's a duty that the members of the Shinjugamine Hoshimori force, like freshman Miki Hoshitsuki, take seriously, but as they're basically normal girls who just happen to get their powers from a magic tree, there are normal life issues they have to contend with as well. With the arrival of their latest mysterious recruit, however, things are about to get deadly serious. Their final exam is about to begin and if they fail, the whole world is doomed!” 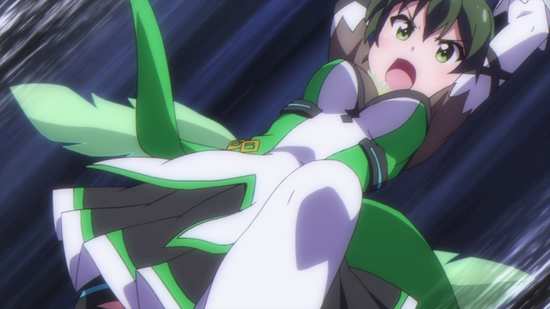 12 episodes are presented across 2 discs in this Blu-ray only release from MVM.

Disc 1
1. We Can Do It!
2. Is That What Gets You?
3. Resort x Retreat x Escape?
4. Songs With Emotion
5. The Meaning of the Iris
6. Renge is Kurumi and Kurumi is Renge
7. Protective Power
8. Hoshimori Downtime
9. Holy Tree Festival 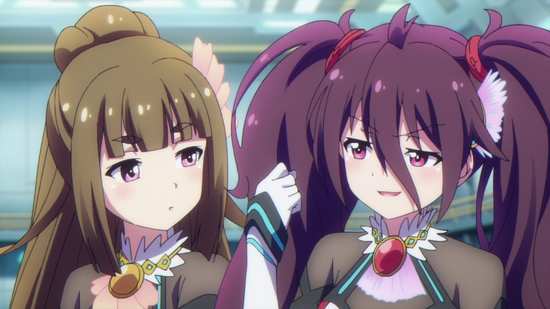 Battle Girl High School gets a 1.78:1 widescreen 1080p transfer on these discs, and it’s up to the usual anime standards. The image is clear and sharp, there is no sign of visible compression, colours are strong and consistent, and even digital banding is kept to a minimum. That’s probably because it’s not the most animated of shows, with simplistic character designs, basic animation, a whole lot of flat and simple colours, and even a tendency for characters to stray off model. The show saves its animation chops for the action sequences, but everything else seems to slip a bit. 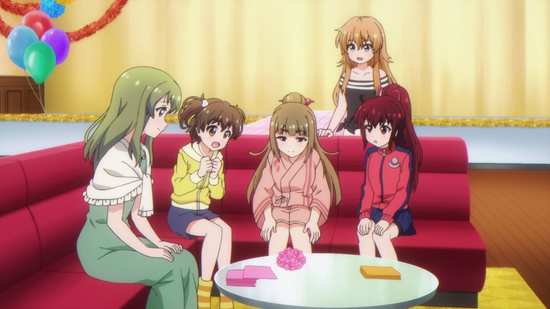 The sole audio track on this disc is a DTS-HD MA 2.0 Stereo Japanese track with subtitles locked during playback. The dialogue is clear, the subtitles accurately timed and free of typos, and when it comes to the music, I was disposed to skip the credit sequences. The action sequences come across well enough. 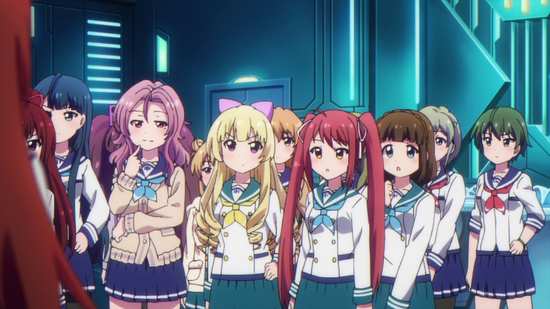 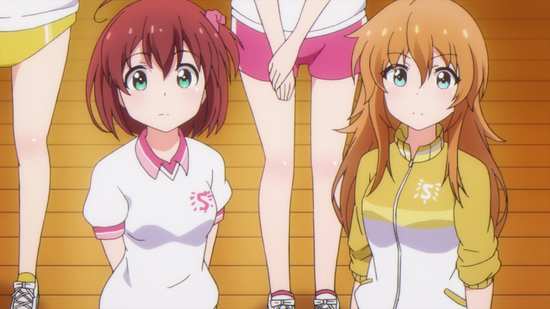 I lied. No-one needs to know what you get when you cross a magical girl anime with one of those school idol anime, but Battle Girl High School gives us the answer regardless. It is however one of those shows where you don’t want a lot of experience with anime before you watch it. The fewer tropes and clichés you are aware of, the more you’re in the flush of first love with this odd foreign medium, the more you may be able to forgive its shortcomings. Battle Girl High School is show that’s put together competently enough, it has a watchable story, and it proceeds at an entertaining pace, and if you haven’t got a frame of reference, you could really enjoy it. But if you’re coming from the perspective of an anime fan of a few years’ experience, then Battle Girl High School just doesn’t cut the mustard. 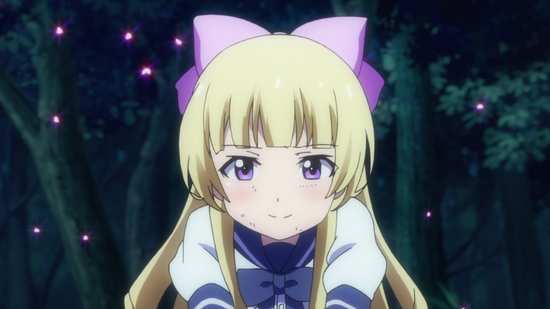 The biggest problem that this show has is character overload. We’re presented with a world where the big threat is from the Irous monsters. They once destroyed civilisation, and ruined the world, and the human survivors managed to escape offworld with the grace of the Holy Tree. They subsequently returned and with a group of magical girls, defeated the Irous and took back the world. Now, these magical girls, based at Shinjugamine High School in the Hoshimori class, battle the Irous to keep humanity safe, empowered with the magic of the Holy Tree. 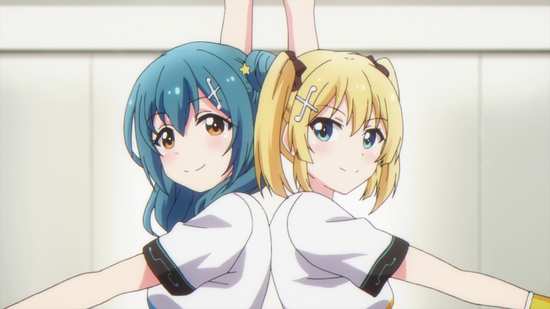 It’s a big class, with at least sixteen girls, and other than a handful of characters, especially the main character Miki, and standoffish transfer student Misaki, most of them are bland, identikit and interchangeable. You might notice the perverted one, the one who likes watering plants, the two professional pop idols, but really none of the characters registered with me, let alone their names. 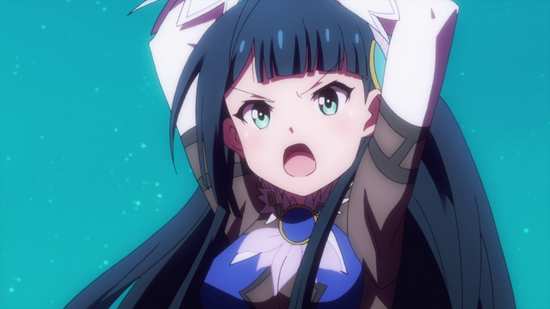 The show also plays out like a slice-of-life high school show, with the after-school club cliché taken by the magical girls fighting monsters bit. There’s a whole lot of silliness of girls hanging out together, and the routine of school life that we’ve so become accustomed to in anime. You won’t be surprised to see a beach trip, and a school festival episode, plenty of songs thanks to the school idol duo, vacation time and so on. 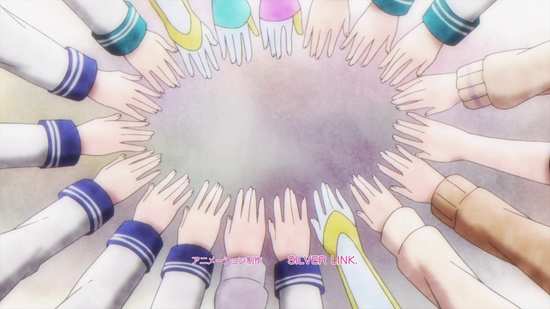 Most episodes have some sort of action sequence against the Irous monsters, and as well as the usual school girl minutiae, there’s also no little magical girl training to be done as well. Magical girl transformations will occur, and battles will take place, battles where the girls will initially be overwhelmed, before turning the odds around and defeating the monsters. 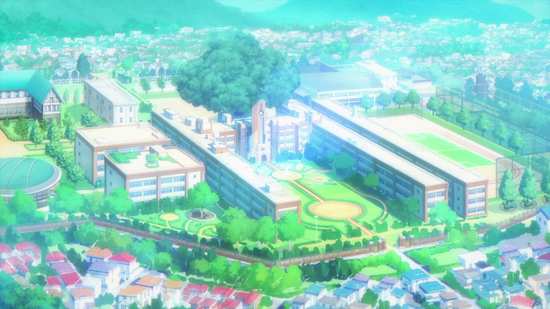 There is a story to be had as well, centring on mysterious transfer student Misaki, and especially how she relates to non-descript go-getter girl Miki. Whereas the girls in the Hoshimori class are happy-go-lucky, fun loving types, Misaki is a more serious girl with an apparent chip on her shoulder, whose primary purpose in life is to battle the Irous. It takes time for her to open up and become friendlier, as well as gain some appreciation for having fun. The show has quite a nice twist to it regarding Misaki’s back-story, and the nature of the enemy that they face, and if you stick with the show to the final episodes, it will reward your investment of time. 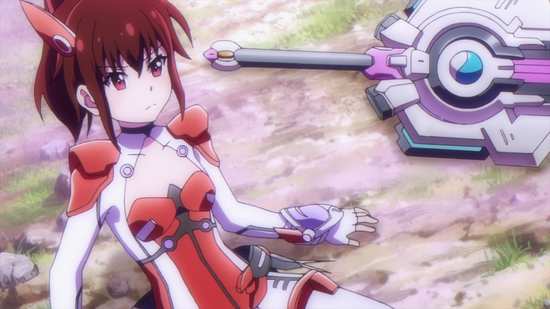 I’m torn on this series. Battle Girl High School is run of the mill, bland, clichéd and animated by the lowest bidder, but once in a while it manages to grab the interest, and even entertain. It wavers between good and bad, but is never so dull as to be average. But that is the score I’m going to have to give it.