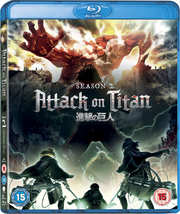 Review for Attack on Titan - Season 2

Funimation used to release through MVM long ago. Funimation then got bought out by Navarre, and started releasing in the UK through another Navarre subsidiary, Revelation. They then switched to releasing through Manga Entertainment. When Funimation bought themselves back, they started releasing through All the Anime, as well as their own label, and given that they had a distribution deal with Universal in the US, a couple of titles have come out in the UK through Universal as well. And now Sony have bought Funimation, and the first title that they will release for Funimation in the UK is Attack on Titan Season 2.

Attack on Titan is the popular manga that spun off an even more popular anime, which briefly looked like the next big thing to take anime mainstream. It didn’t, but Manga Entertainment released that twenty-five episode series in the UK. They didn’t release the two compilation films that condensed that first series, but they did release the two live action film spin offs. Last year, Funimation released the parody spin-off Attack on Titan Junior High with the aid of Anime Limited, and come February 2018, Sony Home Pictures Entertainment will release the Collector’s Edition of Attack on Titan Season 2. And in the very same month, you can go to the cinema and watch Attack on Titan: The Roar of Awakening, which is the compilation movie of season 2. This has been licensed by All the Anime, and they’ll most likely give it a physical release also. Believe me, nothing is ever straightforward when it comes to anime. Attack on Titan Season 3 will be broadcast in Japan and no doubt streamed to the world later this year. 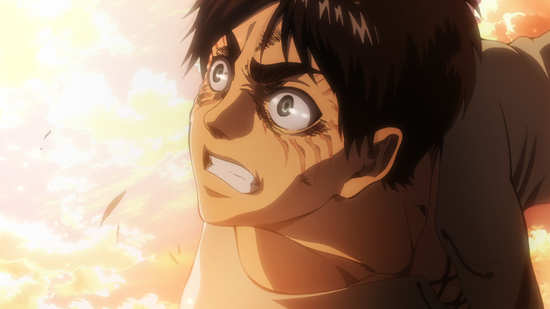 A hundred years previously, the Titans came. No one knows from where, or what they wanted; giant naked beasts in human form, with no other thought or instinct than to hunt and devour humans. There was no defence, no comprehending these mindless enemies. Humanity was almost wiped out, the few survivors seeking refuge in a small parcel of land, defended by fifty meter high walls, higher than any known Titan. And so mankind has endured in relative safety for the last hundred years, a small enclave in what used to be their world. Dreaming of the outside world has become a taboo, understandable when the few military expeditions sent out to reclaim lost territory always come back having suffered devastating losses.

That doesn’t stop the young from dreaming of a free world, and friends Eren Jaeger and Arwin Arlelt long for the day that they can explore the world that they’ve been denied all their lives. It’s only the pragmatism of their friend Mikasa Ackerman that keeps their wild dreams in check. Eren’s mother certainly wouldn’t hear of him joining the Scouts that venture outside the walls and suffer such devastating losses. Then the Titans return, heralded by a previously unknown Colossal Titan that towers over the perimeter walls, with an Armored Titan that breaches those walls to let the rest of the man-eaters in. Suddenly, humanity is forced to retreat from its own, meagre remaining territory once more, pushed back from the lands bounded by the outer wall Maria, to the inner boundary of Wall Rose. And Eren’s left with an unfathomable desire for vengeance, to slaughter every last remaining Titan and reclaim the world. 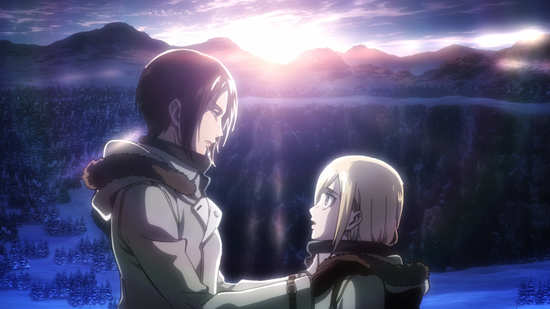 Five years later, the three friends have graduated military training with flying colours, and have shunned the prestigious military police, the comparatively safe guards, to sign up for the Scouts, but they have no time to settle into their new roles as humanity’s vanguard, when the Colossal Titan reappears at Wall Rose, and the Titan onslaught resumes. This time Eren will get payback, this time Eren will have his revenge, but there’s something about Eren that no-one knows, not even Eren himself. It transpires that Eren might just be the weapon against the Titans that humanity needs, or he might just be the biggest threat that humanity faces. The battle for survival continues in this second season of Attack on Titan, and if you thought there weren’t any more shocking secrets to be revealed, think again. Twelve more episodes are presented across two discs from Sony Pictures Home Entertainment. 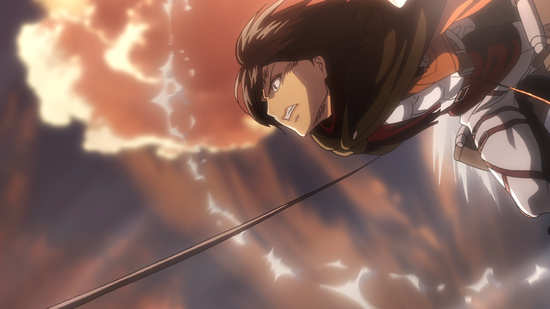 Attack on Titan gets a 1.78:1 widescreen transfer at 1080p resolution, on two dual layer discs. The image is clear and sharp throughout, with no visible aliasing or compression. Even the perennial problem of digital banding is kept to a minimum here, really only restricted to darker scenes.

Attack on Titan’s visual aesthetic is astounding, and comes to life with impressive impact on Blu-ray. The character designs are typical anime, but are drawn with bold outlines and shadow detail to make them stand out against the backgrounds. Those backgrounds are detailed and stylish, evoking that pseudo-mediaeval feel with North and Central European architecture. The show also uses a diminished colour palette, eschewing the bright and primary (except for blood), and opting instead for autumnal, pastel shades. On top of that the animation is excellent, detailed, fluid, and atmospheric. The aerial action sequences have to be seen to be believed. The Spider-man movies should take a leaf from Attack on Titan.

The images in this review were kindly supplied by the PR. 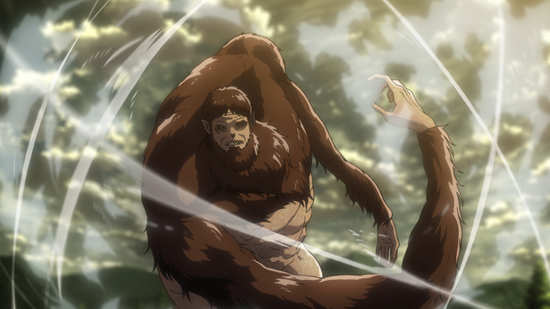 You have the choice between Dolby TrueHD 2.0 Stereo Japanese and 5.1 Surround English, with translated subtitles and a signs only track locked during playback. I went with the Japanese audio as always, and was happy enough with original voice actor performances, suitably histrionic for such an over the top show. What I sampled of the English dub was acceptable enough, with the actors rising up to the dramatic challenge. Certainly the 5.1 up-mix from Funimation really does enhance the show’s dynamic action sequences, and it’s a shame that the Japanese audio couldn’t have been mastered in surround for a change. Alas not a lot of Japanese television gets the surround treatment in Japan. Manga Entertainment had a lot of trouble with their subtitles, and with getting everything on screen at one time (particularly for the eyecatches), as well as an odd, UK localised translation. There’s no such problem with Funimation’s subtitles, everything is clear and accurately timed. One issue is the lack of song lyrics for the theme songs; the second is that Funimation haven’t subtitled the eye-catches. However, the eyecatches are translated in the eyecatch gallery on disc 2, which leaves only the absence of song lyrics to whinge about.

The discs boot to animated menus, and you get the Marathon Play option if you wish to forego credit sequences.

Disc 1 autoplays with a trailer for My Hero Academia. 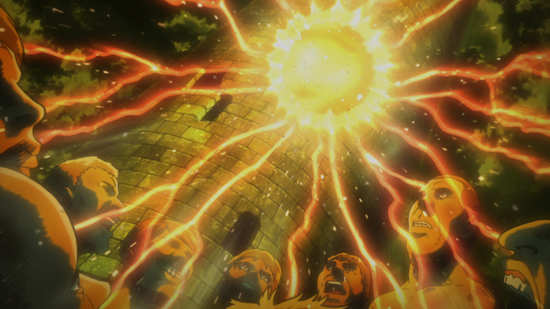 The rest of the extras are on disc 2, and there’s a lot more here than the usual anime gets.

The aforementioned Eyecatch Gallery is on this disc.

You get the Promo Videos and Textless Credits.

Sony release Attack on Titan Season 2 on Standard DVD and Blu-ray, as well as a Zavvi exclusive collector’s edition combo, with art and production booklets. I only saw the check discs and can’t comment on any physical extras or packaging. 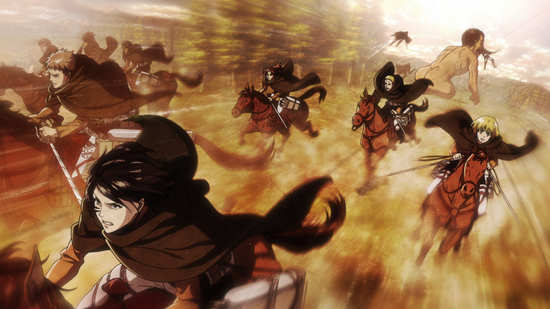 If you’ve been eagerly awaiting your next Attack on Titan fix, those increasingly few of you who don’t stream anime, then you’ll be more than pleased with Attack on Titan Season 2, which carries on in just the same vein as the first series, faithfully sticking to the manga like glue, and moving the story forward with truly satisfying narrative and character revelations. We learn a lot more about the Titans in this collection, following Season 1 Part 2’s reveal that Eren isn’t the only human that can become a Titan. Annie was enough of a shock, but in this collection we learn the true identities of the Colossal Titan and the Armored Titan that started off the story so violently when Wall Maria was breached, and Eren’s mother killed. There is also an emphasis in this collection of episodes on the relationship between Ymir and Christa, the brusque cadet and her comparatively meek friend. It turns out that neither of them is who they appear to be. This second series is catnip for any Attack on Titan fan. 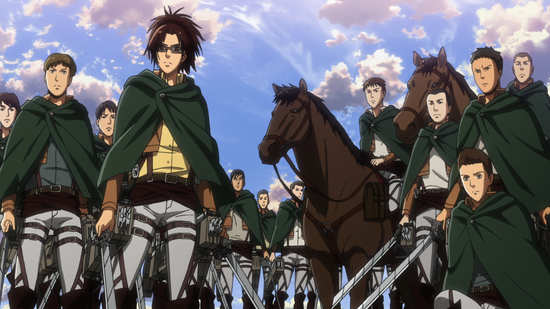 It’s a good thing too, as the creators stay true to the adage that once they have you by the balls, your hearts and minds will follow. It’s a phenomenon I’ve seen in long running shonen action shows, where they reach a point of no return. Naruto Shippuden right now is just like that, where Masashi Kishimoto can tell the story he wants, just how he wants to, because if you’ve watched the last 500 episodes, you’re not going to stop now. Attack on Titan’s first series was so epic, so watercooler fantastic, that on the strength of those first twenty-five episodes, you’re going to stick with season 2 no matter what. Staying faithful to the manga in this season means some awkward, and uneven storytelling, with plenty of flashbacks, and the odd episode where people just stand around and talk for twenty minutes. It’s just enough for the attention to start wandering before the series throws in one of those revelations that make you sit up and take notice.

Attack on Titan’s masterstroke is in having such a wild and fantastic premise that you can’t help but wonder how this state of affairs came to pass. Massive Titans intent on devouring humans having driven the human race into a small walled enclave is astounding enough, but then you get humans that can turn into Titans, and you start wondering why, and how. That was where we were at the end of season 1, but as season 2 commences, we have the revelation about the nature of the walls that protect humanity to explain. The mysterious figure of the Beast Titan that we briefly glimpsed at the end of the first season is a constant enigma in the second. We meet some more humans that can turn into Titans, and that raises questions about their origin, and their motives. A new Titan invasion inside Wall Rose has an unexpected and shocking source. The secret is to have every new revelation adding to the overall picture in stunning, and fantastic ways, but without it ever seeming outlandish or ridiculous, and Attack on Titan walks that tightrope like a genius acrobat. 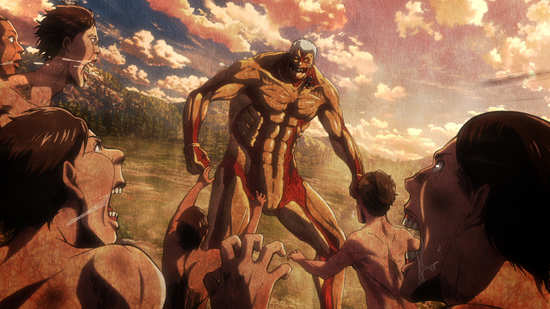 Of course there is all of the action as well. The ODM gear, the powered wires that let the soldiers and scouts fly through the air like Spider-man as they attack the gargantuan man-eaters is still one of the coolest things I’ve seen in anime. The animators actually up their game for this second season, delivering action sequences, particularly towards the end of the collection that are even more jaw-dropping than those in the first. Attack on Titan Season 2 lives up to and even exceeds what the first season gave us, although the uneven storytelling makes this a show that is better to binge than it is to watch episodically. Once again the problem is that this is an ongoing narrative. Season 1 at least gave us a beginning, but season 2 is all middle, and how good the series eventually turns out to be is dependent on the whole story being animated. At least Season 2 will have you looking forward to season 3.