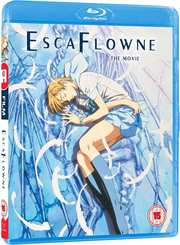 Review for Escaflowne the Movie 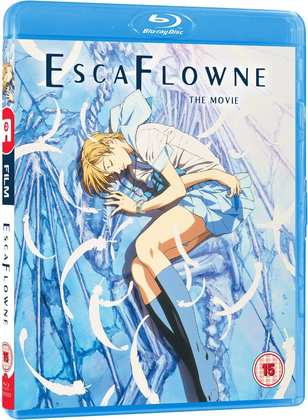 The two types of movie spin-offs that we most commonly see are the compilation movie, which edits the TV series into a more manageable 90 minutes or so, a greatest hits compilation so to speak, or the original story, either a continuation or a standalone. But there is a third type of movie spin-off as well, the re-make, taking the series storyline and doing it over from scratch, with a new script, and wholly new animation. It’s a chance to have another bite at the cherry, deliver a new perspective on existing material. The Adolescence of Utena was a psychedelic mind-bending remake of the Revolutionary Girl Utena series, and with Escaflowne: The Movie, director Kazuki Akane reworked The Vision of Escaflowne television series with a far darker, grittier outlook. All the Anime originally released an Ultimate Edition of Escaflowne which contained the series, movie, soundtrack and other goodies at the end of 2016, while the series got a standalone release early this year. Now we get the final standalone piece of the puzzle, the film in Blu-ray form.

Hitomi Kanzaki is depressed. She’s been dropped from the athletics team, she ditches classes to instead sleep on the school roof, where she has the oddest dreams, and she’s also pushing her friends away. There’s nothing more than she would rather do than fade away from this world completely, and that’s exactly what happens when she is summoned to Gaea, a fantasy world currently torn apart by civil war. For Hitomi is the Wing Goddess, the one who will give life to the ancient armour Escaflowne, which has the power to destroy the world. That’s what Folken of the Black Dragon Clan desires, but Hitomi first encounters Van of Adom, last king of the extinct White Dragon Clan. His kingdom like so many others was destroyed by Folken, and the surviving warriors of many such lands have banded together to resist the Black Dragons and fight back. But Van is being eaten away by his desire for revenge.

The film gets a slightly window-boxed 1.85:1 widescreen 1080p transfer, with a very thin black border all around. The image is clear and sharp, with strong, consistent colours. The print is clean and stable, although I suspect a smidge of DNR. Certainly grain was largely absent during playback. About the only complaint might be a hint of digital banding during scene fades, but other than that, the film looks splendid. It reworks the character designs from the TV series (they’ve all had nose jobs), while the animation is obviously of a higher quality. It’s more atmospheric and stylish, while the fantastic vision of the TV series has actually been scaled back to give a more historical and realistic feel. There are only two armours (guymelefs) in the film, everyone else fights on horseback, while only the Black Dragons have flight technology. Allen’s mode of transport is a giant, hotel sized caravan pulled by equally giant oxen.

You have the choice between Funimation’s 2016 redub for the film, the original Ocean dub, both in English, as well as the original Japanese. All audio is in Dolby TrueHD 5.1 Surround format, with subtitles and signs locked to the appropriate track. The disc begins with the usual copyright warning, and this time there is a disclaimer about the insert song Sora, in that Funimation weren’t permitted to redub it into English. Apparently they weren’t allowed to subtitle it either. I was happy with the original Japanese track, which makes good, vibrant use of the surround soundstage to immerse you in the action, while bringing out the best in some more Yoko Kanno music brilliance. The subtitles are timed accurately and are free of typos.

After playing a trailer for Funimation NOW, the disc boots up to an animated menu. All you get in terms of extras are the promo video, the US trailer, and further trailers for Code Geass, In Search of the Lost Future, Ergo Proxy, and The Vision of Escaflowne.

There is a lot to like about Escaflowne the Movie, especially as for me, it addresses those aspects of the series which I had the biggest problem with. The series was about fate, about destiny, about the manipulation of luck, mystical elements that began with Hitomi’s tarot cards and fortune telling, and went all the way up to the series antagonist, Dornkirk, and his steampunk fate manipulation engine. That was the aspect that I disliked the most, despite the great characters, the fantastic animation, and the fabulous world-building. The Escaflowne movie is about something more fundamental, it’s about life and death, and it dispenses with the fripperies about fate altogether, along with Dornkirk.

It’s also about depression, the fatalistic feeling engendered by loss, or simply by ennui. Hitomi Kanzaki’s depression at the start of the film is the easiest to relate to, although the hardest to rationalise. It’s the teenage sense of isolation, difficulties in relating to the world and other people and the belief that her existence doesn’t matter, that has her looking for a way out, both literal and figurative. That she gets a fantasy way out, when summoned as the Wing Goddess to Gaea is perhaps the one fictional, escapist moment in the film, as so begins an adventure in which she can work through and resolve her feelings.

Van’s depression on the other hand has a definable cause, the destruction of his clan at the hands of Folken and the Black Dragon Clan. He’s a king without a kingdom, a leader with no one to lead, and all that’s left him is an animalistic rage, a rage to which any target will suffice to lash out against. He’s ready to draw his sword on enemies and allies alike, whether it’s Hitomi or Allen and his rebel group. Given that the feelings of its pilot will direct Escaflowne as to which path it will take, destruction or liberation, it’s clear that Van will have to work through his hate and anger before he’s ready to pilot Escaflowne.

Then there is Folken, born into a royal family, but passed over as heir in favour of his younger brother. That injustice has tarnished his heart, and driven him on a destructive path of his own, first by destroying his own family and kingdom, and then turning his attention to the destruction of Gaea. Whereas Hitomi tried initially to deal with her depression by erasing herself from the world, Folken would rather erase the world as well.

You can see why I would like the movie more than the series. Dispensing with the arcane background and motivations of the TV series, the story here is more fundamental, it’s about revenge, and that is far easier to relate to. The film is darker, certainly it’s bloodier, with the more mediaeval worldview reflected in the brutality of the fight sequences. The one problem is that in cutting the story down from 26 episodes to 90 minutes, they’ve cut a little too far, and while Folken, Van, and Hitomi get enough in the way of development, the supporting cast is less well catered for. Van’s switch from hate machine to someone a lot more human is a little abrupt even so, but it’s the end of the film that is unearned. It needed the relationship between Dilandau and Jajuka as well as that between Dilandau and Folken to be fleshed out more, but as it is, there’s not enough motivation behind Jajuka’s actions to make the film’s climax resonate emotionally. You wind up having to rely on what you know of the series to imbue the film with meaning, but the film and the series are too dissimilar.

In terms of visuals, in terms of action, and in terms of shifting Escaflowne into a different genre, the Escaflowne movie is spectacular. It just needed another fifteen or twenty minutes of character development to feel fully fleshed out, but I have to say that I wholeheartedly enjoyed what we do get. The consumer annoyance is that if you want the extra features on the movie, only the Ultimate Edition will satisfy (or perhaps the 2009 Bandai Visual Blu-ray, which has a handful of interviews). This standalone release has the on-disc content stripped. That makes little sense, as it costs more to author a new master without the extras than simply run off a new batch of the old discs.