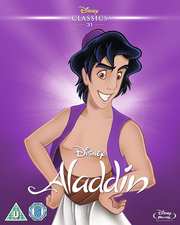 New: £12.89
Aladdin and the King of Thieves [DVD]
Walt Disney Studios HE

New: £17.99
Aladdin - The King of Thieves + The Return of Jafar
ALADDIN: KING OF THIEVES / RETURN OF JAFAR 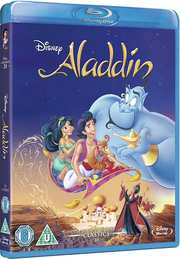 I’ve had a curious relationship with Disney. As a child, whose sole exposure to animation was in 5 minute, or 20 minute form courtesy of Looney Tunes, Tom and Jerry and Hanna Barbera, it was a source of endless fascination that you could get cartoons that were feature films, while the sort of fun fairy tales that Disney delivered would enthral and entertain in equal measure. As I grew older, and my tastes changed, it became a case of love-hate, appreciating Disney for what it did for the medium, but wanting something edgier and darker, more adult in animation, something I eventually found in anime. It all came full circle when Disney championed the cause of Studio Ghibli and Hayao Miyazaki. But back then I shied away from Disney as an exponent of excessive schmaltz. These days, the House of Mouse is the ten ton Dumbo in the room. With their triumvirate of digital animation, Marvel Universe, and Star Wars, they’re bound to have my attention in some regards.

Twenty odd years ago, when it was still mostly 2D traditional animation, and I was being a Disney snob, there were only two movies that I enjoyed enough to buy on home video. The first came from the end of the first golden age of Disney, which lasted from Snow White all the way to The Jungle Book. The other movie came from the 2nd Golden Age, that period in the nineties where it looked as if Disney had found their mojo again, with films like The Little Mermaid, Beauty and the Beast, Mulan, and The Lion King. For me, the one film from that period that grabbed my attention was 1992’s Aladdin. I’ve finally got around to upgrading that VHS tape, and it’s been so long, I’m skipping a format and going straight to Blu-ray. 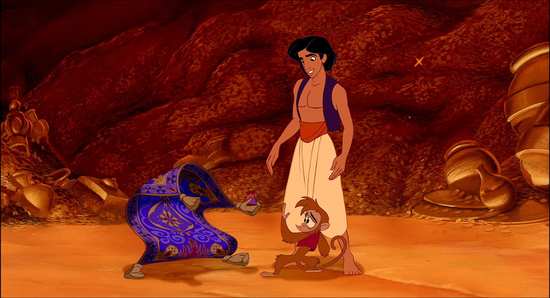 The Grand Vizier Jafar would much rather be Sultan of Agrabah, than advise the Sultan, and to that end he has a plan. In the deep desert lies a cave of wonders, and within the cave lies a magic lamp, and within the lamp dwells a genie that will grant three wishes. Unfortunately for Jafar, the cave has a strict entrance policy, only a scoundrel with a pure soul can enter, a diamond in the rough. Aladdin is a petty thief in the city, such a rough diamond, but one quick-witted enough to keep the magic lamp for himself. And he could use a few wishes, as he’s been smitten with the Princess Jasmine. There’s no future for a street rat with a princess, but with a carefully applied wish, he could be a worthy prince instead. But Jafar hasn’t stopped scheming... 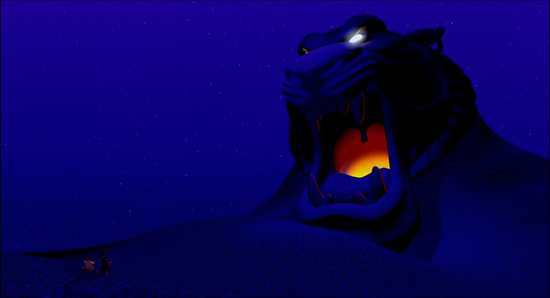 Aladdin gets a 1.85:1 widescreen 1080p transfer, and I finally get to see what all the fuss is about with Disney’s animated Blu-rays. I haven’t heard great things about how they restore their films, and I can certainly see that point of view having now watched Aladdin. This film has been post-processed and restored to the maximum degree. There’s no indication at all that Aladdin was ever a cel and paint feature film, that it was ever completed on 35mm celluloid, and projected with light shone through film. The crystal clear and pin sharp image is in many ways excellent. The line art is crisp and perfectly defined, the colours are solid and even, and the detail level is high and consistent. But there isn’t a single particle of grain left in the film, and if I didn’t know any better, I’d have said that Aladdin had been made post 2000, animated wholly digitally. It’s a great viewing experience, perfect in many ways, but the sense that this was once a motion picture has been lost. 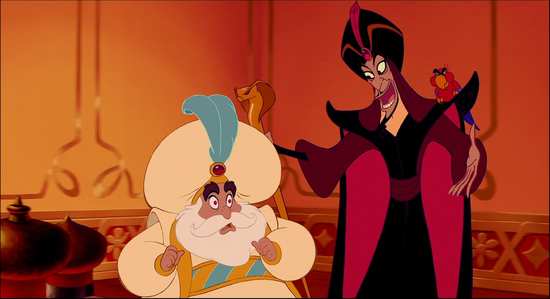 You have the choice between DTS-HD MA 5.1 Surround English, DD 5.1 Czech, Polish, Russian, DTS-HD HiRes 5.1 French, DD 2.0 Ukrainian and DTS 5.1 Dutch with subtitles in these languages plus Slovenian. It’s an effective surround track, booming and resonant at the right spots (the cave of wonders), immersive when it comes to the action, offering the requisite clarity when it comes to the dialogue and the songs.

You get one disc in an Amaray case, as well as an o-ring slipcover with different character art. The disc boots to a language selection menu, before autoplaying trailers for Monsters University and Planes, which then leads to an animated menu. 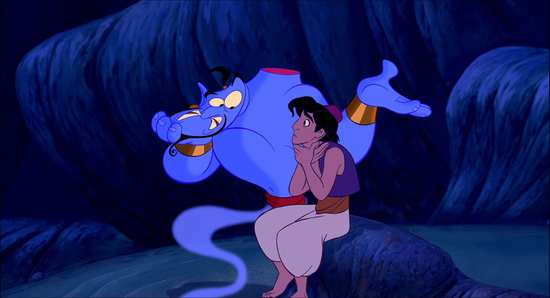 This disc does pretty well when it comes to extra features, including an interesting audio commentary with the writer directors and the producer, some deleted scenes and deleted songs (presented in storyboard form), 3 music videos, and a chance to sing along with the songs while watching the movie.

The big extra here is the A Diamond in the Rough – The Making of Aladdin, a series of featurettes, which with a play all option run to 99:33, featuring a fair bit of a retrospective stage event, where the voice cast and crew were interviewed in front of an audience of animation students.

All of the video extras are in 480i format.

There are plenty of extra features here to keep you busy, but if you want more, you should import the Diamond Edition from the US, which not only has a 7.1 soundtrack, but also a second audio commentary, and also 45 minutes of HD featurettes not on this disc. 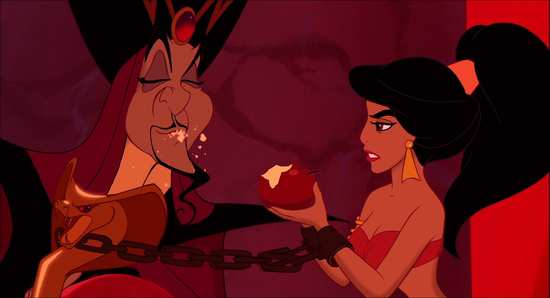 For about half an hour into the film, I was wondering just what was going through my head when I opted to double dip on Aladdin. I haven’t seen Aladdin since I last had a VCR plugged into my TV, and that’s more time than I feel comfortable contemplating, so I had forgotten how this film started. The words ‘culturally insensitive’ spring to mind. Aladdin introduces its Middle Eastern world, overflowing with hackneyed cliché, and decades of cultural prejudice (and that’s even after editing the lyric about chopping off ears in the opening song). Everything Hollywood has taught us about the Middle East since the days of The Thief of Baghdad is present and correct in the opening half hour, with only Aladdin and Jasmine stepping outside of the vernacular, two very bright-eyed, all-American heroes trapped in a world where everyone else speaks with heavy accents, and apologies are always expressed by the thousands. 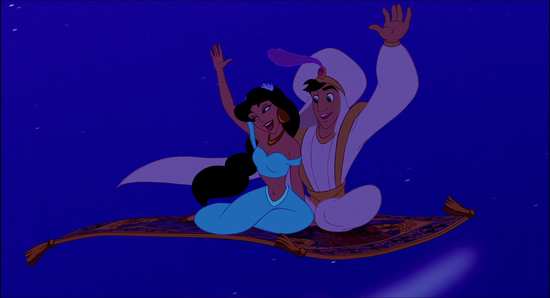 Then Aladdin enters the cave, finds the cute carpet, rubs the lamp, then enter Robin Williams as the genie and the film transforms. It becomes this bright, energetic, original force of nature that makes you forget the opening half hour, and instead it embraces you with love, adventure, comedy, drama, a genuine piece of entertainment. It even makes you look fondly on those shortcomings from the opening; the jovial, easily influenced Sultan, the archetypal villain with the English accent Jafar, whose byplay with his scheming parrot becomes a lot funnier and appealing. The visual artistry in the film stands out more, the imagination of the animators, the little gags and the moments of traditional Disney magic. 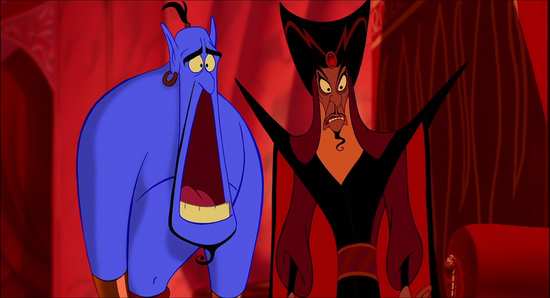 You often see actors steal movies, but this is a rare case where a single actor made a movie. Without Robin Williams, Aladdin would have failed; it’s his performance as the genie that breathes life into a rather stale and unimaginative story. His every word is something that you hang upon, while the animators are more than up to the task in creating a character worthy of that vocal performance. It’s all about seeking freedom, Aladdin wants to be free of his roots, to be more than just the street rat, but burdened down by his lack of confidence. Jasmine wants to be free of her roots, an early example of women’s lib, wanting to escape the confines of royalty, and the hereditary expectation that she will marry to order. Of course the genie wants to be free of his eternal servitude in the lamp, bound to each new master for three wishes. The story too is bound by convention, a boy and girl falling in love, and having to face adversity to prove that their love can prevail. And yet it all feels fresh, exciting and enlivening because of one actor’s free-spirited and improvisational performance. 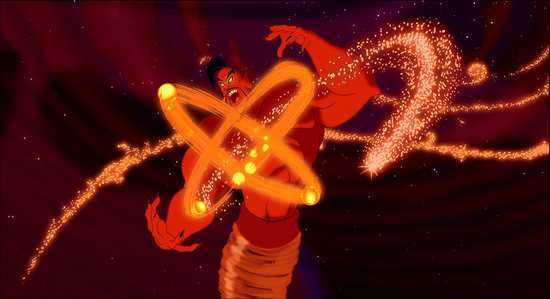 It took me a while, but I eventually remembered what first enchanted me about this Disney classic. As well as the usual Disney magic, it has energy and a free-wheeling pace to it that makes it feel contemporary, and a little edgy, unlike most other Disney animations which seem to aim for ‘staid classic’ status from the second of their release. The Blu-ray release of Aladdin is pixel perfect, and not quite the film I saw in the cinema back in 1992, but it is perfectly watchable on this disc. If you want the whole barrage of extra features, and two more speakers worth of soundtrack, it would be better to import the Diamond release from the US.