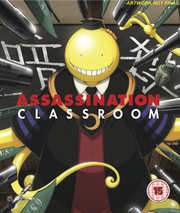 Synopsis:
After the battle with Itona, the students of Class 3E settle back into a normal routine. Well, normal for a class filled with wouldbe assassins! As the weather turns warm, the class can’t afford to laze about, and up their training under the guidance of Karasuma. But with the semester already half over, the government decides to send a new teacher to take over their training. Are his methods too extreme? Or will it be the push they need to become real killers? While training is all well and good, they can’t forget about final exams! And if they want to up their chances of taking out Koro Sensei, they’re going to have to do their very best. The stakes are raised even higher when Class A makes a bet that could send Class E on the best summer vacation ever. Could an island retreat help them set up the perfect assassination?

Contains episodes 12 - 22 with both the English dub and the original Japanese track with English subtitles.