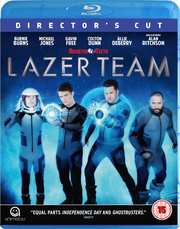 Much as I have this single-minded obsession with Japanese animation, I’ve come to appreciate Animatsu’s diversification of content since the label started up. They’ve championed the output of the Rooster Teeth’s stable over the last year of so, home-grown US animation, their own take on anime in RWBY, and some of the funniest machinima out there in Red vs. Blue. Those discs usually come with trailers for other Rooster Teeth content, and I knew that they delve into live action as well. But I didn’t know that Rooster Teeth make feature films too, until the Lazer Team check disc arrived, a film described as a cross between Ghostbusters and Independence Day. Coming out the same year as the Independence Day sequel, and the Ghostbusters ‘sheboot’, it’s almost throwing down a gauntlet. It turns out that Lazer Team is Rooster Teeth’s first film, and it was crowd-funded on Indiegogo to the tune of $2.6 million. But is it any good? 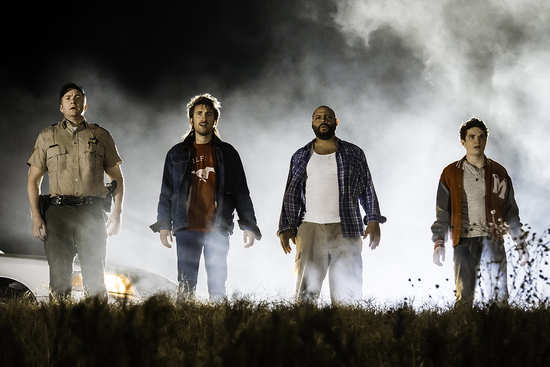 In 1977, SETI picked up what was euphemistically called the ‘Wow’ signal, a transmission suspected to be from an alien civilisation. What isn’t known is that the signal was decoded, and it turned out to be a warning from a species called Antareans. They said that conflict was coming to Earth, and Earth needed to prepare a champion, the best of the best. To help against the oncoming storm, the Antareans would send a power-suit, amazing technology that would enhance the champion’s skills and help him save the world.

Through careful selection, a child was raised by the military to be the ultimate soldier, perfect in every way. All that was left was to await the suit promised by the Antareans. Only the worst of the worst got in the way of the plan. A stray firework knocked the Antarean ship off course, and instead of just one person, the suit has wound up split across four people, half-assed sheriff’s deputy Hagan, sex-obsessed jock Zach, drunk slob Herman, and total moron Woody. The helmet, gauntlets, and boots have bonded to them, can’t be removed, which means they’re all that stands between Earth and its total destruction at the hands of an aggressive alien. The only chance Earth has is if they learn to work together as a team. Only they can’t stand each other... and they’re idiots. 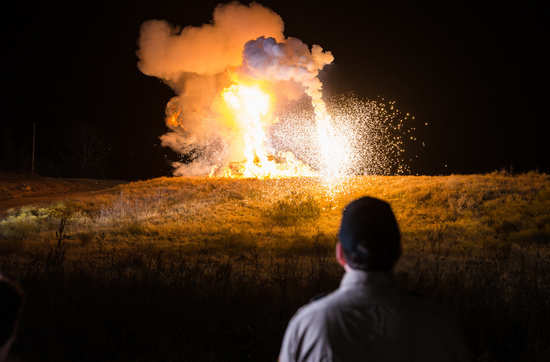 Lazer Team is presented on a BD25, and a Youtube-Red logo pops up at the head of the film, indicating where you might watch it before shelling out for a home video release. It is still pay to view on Youtube though, unlike Rooster Teeth’s shorter content. It’s very obviously a digitally shot film, and it hasn’t had much of the post-production treatment to get it looking filmic, so no grain, no flicker, and a lack of contrast in darker scenes. It is clear and sharp throughout though, very watchable, although fast motion on screen can be jerky at times. The audio is disappointing though, DVD quality DD 5.1 and 2.0 Stereo English, which is adequate at best. The surround throws a few effects around the soundstage, explosions are beefy enough, while the dialogue is clear throughout. You do get subtitles in English, German, Spanish, French, and Antarean (someone’s been watching their Futurama DVDs). 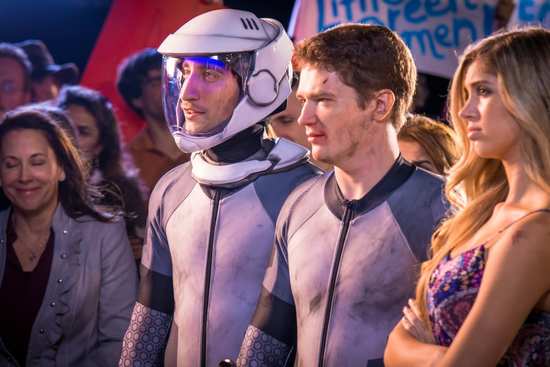 The disc autoplays a trailer for Rooster Teeth, and boots to a wonky animated menu (the audio breaks if you navigate the options).

The film gets a commentary from the editorial team, Matt Hullum, Aaron Marquis, Chris Demarais, and Josh Flanagan.

On the disc you’ll find six deleted scenes, a VFX breakdown, an Orchestra Featurette, Concept Art, and Bloopers. The total run time (there’s a play all option) comes to 31:48 and it’s in HD.

Finally there are trailers for RvB Season 14, Crunch Time, Connected, and Camp Camp.

Lazer Team proves that the independent minnows can be just as good as the Hollywood sharks. Given the current state of Hollywood, that isn’t actually saying much, but I had a good time watching Lazer Team, and more importantly I laughed, quite a bit. The Ghostbusters, and Independence Day comparisons are apt, but the beauty of Lazer Team is that it’s an original work. The new Ghostbusters was invariably compared to the original, Independence Day Resurgence had to live up to the first film, but Lazer Team has no reputation to uphold, no expectations to live up to. It can suck or succeed on its own merit, and it succeeds for the most part. 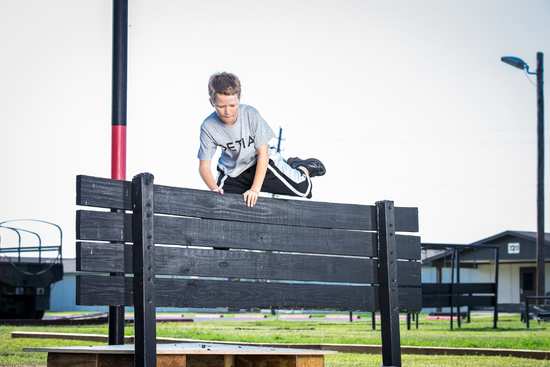 It isn’t the most original of premises though, the first time I saw a champion training up to save the world was probably The Last Starfighter, although with its power-suit, Lazer Team has more of a Power Rangers vibe to it. But it plays it all for comedy, walking the edge of parody throughout, it’s all about the characters, and if you have seen Rooster Teeth’s Red vs. Blue, then you’ll know just where this film is coming from. When it comes to the script and the characterisations, Lazer Team might just as well be a live action Red vs. Blue. Given how much I enjoyed the comedy of Red vs. Blue, this is definitely a good thing. 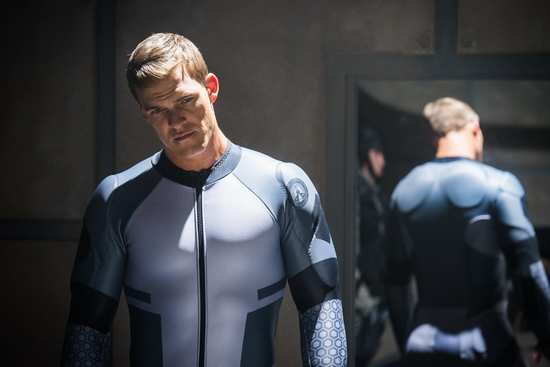 The idiots have to save the world. Deputy Hagan may be a cop, but he’s a loser who can’t get any respect. He’s the wise idiot, the man who wants to do the right thing, but is always hobbled by his lack of skill and deficient personality. He winds up with one gauntlet that projects a shield. His personal bugbear is sex-obsessed jock Zach, a football player who has designs on Hagan’s daughter Mindy. He’s the firebrand idiot who thinks he’s God’s gift, but whose obnoxiousness keeps getting him tased. He gets the other gauntlet, the one with the frickin’ lazer.

Herman played school football with Hagan way back, and busted his knee in a match incident, which left a lingering resentment of the deputy. He’s the drunk slob of an idiot, with an attitude problem and a tendency to vomit. He gets the boots, which not only heal the knee, but let him run so fast that he pukes even more. And finally there’s Herman’s friend Woody, the idiotic idiot, the idiot-squared, a man so devoid of intellect that his stupidity becomes profound. He gets the helmet, which actually cures his stupidity, and gives him an English accent. By turns helped and hindered by the military, they have just a few days to train up, learn how to use the suit, work as team to save the world. It doesn’t go according to plan, especially as the enemy sends an advance party to get the suit. 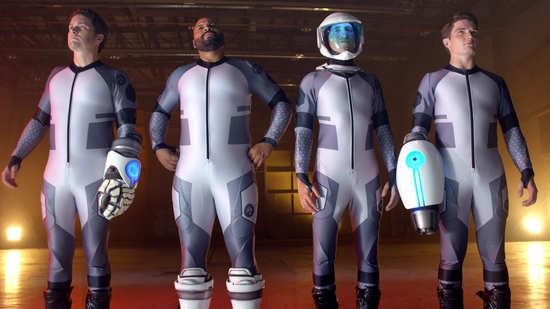 Lazer Team is entertaining, and it’s funny in all the right ways, making the best use of the characters. It’s smartly written, paced well, and the effects look spectacular given the budget. If there is a weakness, it’s just as predictable and trite as all the current Hollywood movie comedies. But if that’s the target the Rooster Teeth team are aiming at, they’ve hit a bull’s-eye. Besides, I’d rather watch predictable and trite, with a smidge of originality, than predictable and trite and ruining my childhood memories anytime. The fans must have agreed, as Lazer Team 2 is in production.