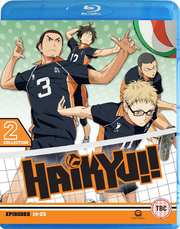 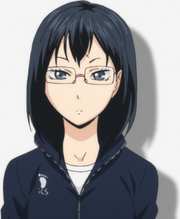 I got all excited a few months ago at the advent of Haikyu!! in the UK, as Animatsu released the first half of season 1 on DVD and Blu-ray. My excitement stemmed from the fact that this is a rare sports anime to be released in the UK, which to this point could be counted on the fingers of one... finger (Bamboo Blade if you’re wondering). It didn’t hurt that Haikyu!! is an exceptionally good anime as well, and my experience with that first collection of 13 episodes got me enthused enough to compare it to Chihayafuru. Apparently I got a little over-enthused, as in the interim, I’ve had the chance to watch Chihayafuru again, and as good as it is, Haikyu really doesn’t compare when you come down to it. Still, I have been eagerly awaiting part 2 of season 1, and hopefully I’ll remain just as eager to see Season 2 when all is said and done. 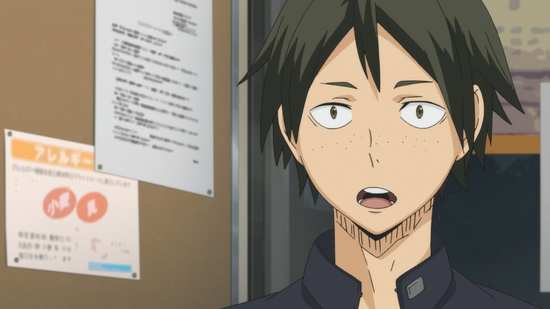 Shoyo Hinata is an unlikely volleyball player, as he’s certainly short of stature. But he fell in love with the sport at a young age, when he saw a TV broadcast of a game, with a similarly short player making the most exciting plays. He wants to be just like the Tiny Giant, and fly on the volleyball court. He singlehandedly formed a volleyball club in middle school, and through sheer dint of effort and cajoling, had a team gathered for a tournament by the end of his third year. The trouble was that Yukigaoka Middle School’s team of enthusiastic first-timers drew Kitagawa Middle School in the first match, the tournament favourites, and Shoyo Hinata ran headlong up against their setter Tobio Kageyama. The result was inevitable, but what wasn’t, was the animosity engendered between the two and their differing attitudes to the game.

Shoyo Hinata vowed to keep on training, continue to improve, and get onto Karasuno High School’s volleyball team, so that he could one day come up against Kageyama in a tournament and get his revenge. He wasn’t expecting Kageyama to go to Karasuno as well, and he certainly didn’t expect to be on the same team as him. But the two entrenched rivals might just become the ultimate combination in volleyball. In part 2 of Season 1, the Karasuno Volleyball team face their first real challenge in the Prefectural tournament, hoping to qualify for the Nationals. 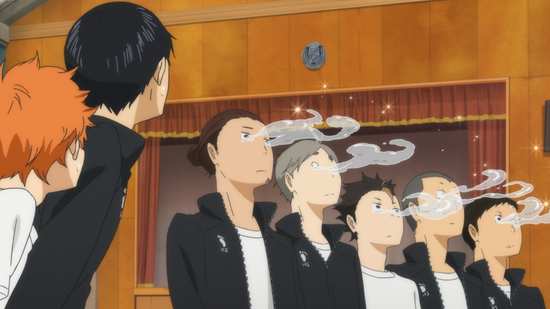 The concluding twelve episodes of the first series of Haikyu!! are presented on one Blu-ray disc from Animatsu. 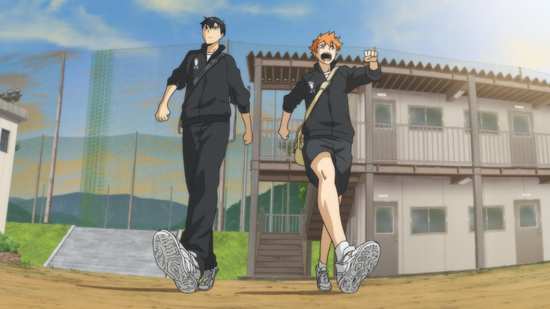 Haikyu!! gets a 1.78:1 widescreen 1080p transfer. I have no complaints about this anime’s presentation in HD. The image is clear and sharp throughout, there are no issues with compression, artefacting or even significant banding, and the animation is smooth and fluid. It’s all to the good, as Production IG have gone all out to bring this anime to life. The character designs are likeable, individual, and memorable, while the world design conforms to the usual modern high school aesthetic. It’s detailed, colourful, and very appealing. The real joy comes in the action animation. Volleyball is a fast paced, high energy, and fluid game, and Production IG have managed to maintain, and even enhance that sense of pace and action, as they animate the games. These are fast paced, breathtaking gameplay sequences, and you’ll be tempted to skip back and watch scenes again, just to take the brilliance of the animation in.

You might be wondering how 12 episodes on a single dual-layer Blu-ray fare, and I have to say that I noticed no difference between this and the part 1 release when it comes to image quality, although I don’t have a behemoth of a television screen that really blows up the image, to where it can be scrutinised for minor defects. 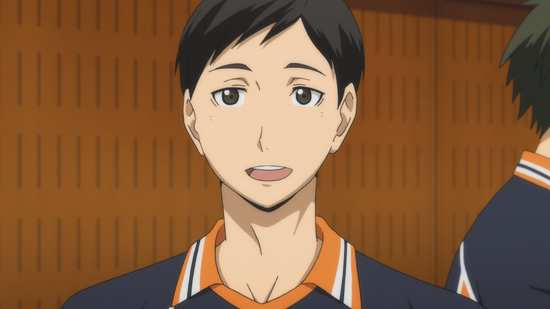 This one is also a subtitle only release, with just a DTS-HD MA 2.0 Stereo Japanese track. Haikyu!! really is a show that would benefit from a dub, as it isn’t exactly steeped with localisation issues, and an English dub would flow well. But as it’s a Sentai title, maybe it’s better off subtitle only. The audio is fine, the stereo gives the show a good deal of space, and the voice actors are suited well to their roles. Haikyu!! also has some great music to it, and not just the theme songs. It’s a great, uplifting soundtrack, perfectly suited to the subject matter. The subtitles are timed accurately, free of typos, and unfortunately are locked during playback. 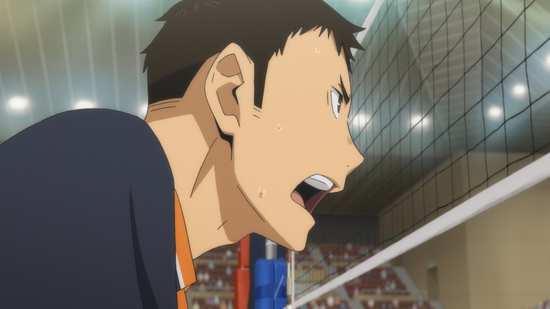 The disc presents its content with a static menu, and since the episodes are in Japanese with locked subtitles, there are no set-up options.

The disc autoplays with a trailer for No Game, No Life. You also get the textless credit sequences and trailers for MEDAKA BOX, Gingitsune, To loveru Darkness, and Needless.

Haikyu is fantastic fun to watch. It’s the combination of great, interesting and entertaining characters, with sublime, action stoked animation, all wrapped up in an energetic sports storyline. This is compulsive, one-episode-more viewing that will keep you glued to the screen. I believe I said as much during the review for part 1, and that is just as valid a description for Part 2 of Season 1. The evidence for the popularity of the show must surely come in the fact that the third season of the show will start airing in Japan in October. I also made the observation that this is one sports anime that concentrates on the sport side of things almost exclusively, and that if you were expecting a little slice-of-life and off-court character drama to mix things up, you’ll be disappointed. 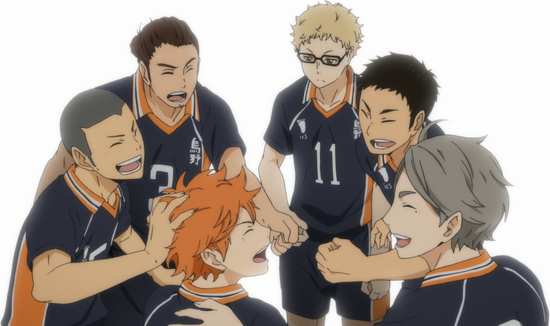 That is even truer for Part 2 of Season 1, which makes Part 1 look like a gentle character drama with a sprinkling of volleyball in comparison. Other than the book-ending episodes, this collection is all about the local qualifying high-school volleyball tournament, and most of the runtime of these episodes is actually spent on court, in games. That raises the potential red flag of re-watchability in my eyes. How often do you re-watch a sporting event? I don’t know about you, but my DVD collection is bereft of classic football matches, golfing tournaments, and Formula 1 races, it’s the kind of thing that you watch once, preferably live. Granted, Haikyu’s matches are full of character moments and development, we’re privy to the team conversations, the flashbacks to the moments that inspired them, the various friendships and inter-rivalries that develop, but this Part 2 is essentially 3 matches of volleyball, and I don’t know if I’ll be as invested the second time around. 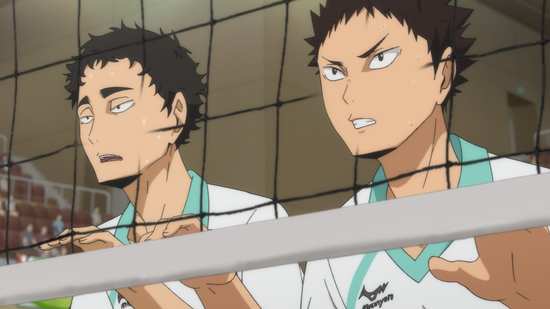 But, boy was I invested for the first time. In fact, the penultimate episode of this collection had me in manly tears, with the resulting melancholy and ennui lingering over to episode 25, before there was a collective reaffirmation of purpose. It’s possible, indeed inevitable that fans get emotionally invested in their sport of choice, offering unconditional support to their chosen teams, but to deliver the same sort of experience in a fictional game with a fictional team, animated at that is a testament to the show’s deft writing, brilliant animation, and engaging characterisations.

This collection begins with an episode previewing the forthcoming Prefectural tournament, with a whole lot of training time passing rapidly in a montage, and with the hopes and expectations that the once powerful Karasuno volleyball team will ascend to those rarefied heights of victory once more, on the back of their new Setter, Spiker/Decoy combination, Kageyama and Hinata. But from episode 15 it’s the tournament proper, which for the first match mixes things up a bit as Karasuno’s girls’ volleyball team is competing as well. 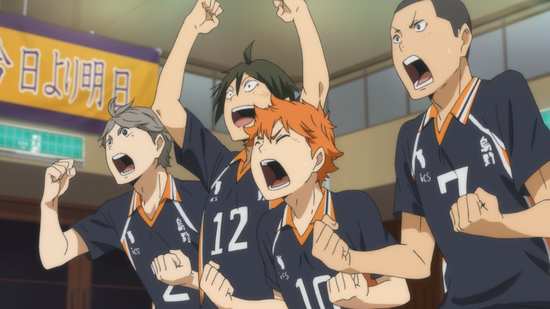 The first match for the boy’s team is against Tokanami High School, and it’s the chance for the relative unknown new team from Karasuno to make an impact. And they certainly do announce themselves as a team to keep an eye on with their lightning fast play and skill. It’s over in a relatively short two episodes, but that’s the prelude for the second round match against Date High School. This is notable as Date was the team that stopped Karasuno the previous year, and so knocked Spiker Ace Asahi’s confidence so badly that he had quit the team, before being persuaded back in Part 1. Now he’s up against the same foes again, and even with Kageyama’s perfect placement, Hinata’s support, Asahi has a greater challenge facing his demons. Again this is a relatively short match running to just two episodes. 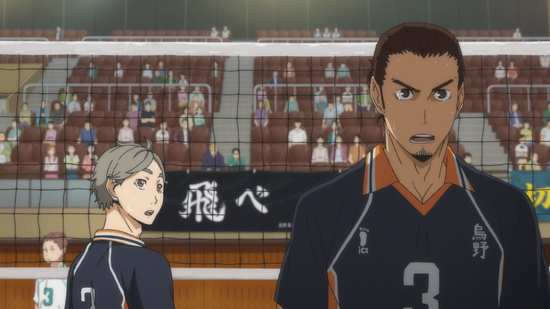 But the real challenge is in round three of the tournament, as Karasuno have to face Aoba-Johsai again (they had a practice match against them in Part 1), only this time Aoba have their star Setter Oikawa playing. If Asahi had demons with Date, this time it’s Kageyama’s challenge to surmount, as most of his middle school team, who had issues with Kageyama’s holier-than-thou playing style, graduated to play for Aoba-Johsai, and Oikawa in particular has some grievances to work out on the volleyball court. The show takes its time with this match, stretching to five episodes. It’s no surprise as the teams are evenly matched, the flow of play switching between the sides on several occasions, and with one episode in its entirety devoted to a deuce point.

Of course it’s less about the sport than it is about the players on the teams, the challenges they face, and how they grow from their victories and defeats. As Kageyama is the centre of the team, the show really focuses on how he changes, particularly in how he relates to his teammates (his attempt at a comradely smile is hilarious), especially in the way that he’s started to communicate with others, instead of trying to dictate the course of play. As mentioned, Asahi has to face his demons when the team plays Date, Sugawara gets his chance to shine when Kageyama hits a wall and gets substituted out, and reveals just why he is the heart of the team, and also serves as an example to Kageyama the real role of a setter within a team. Incidentally, the third years have to come to terms with this being their final year on the Karasuno team, that exams, graduation, and the real world await, and that they shouldn’t be sacrificing their futures for a game of volleyball. Practically everyone in the team gets some degree of development, except for Shoyo Hinata, whose constancy of purpose is as rigid as that of his lookalike Naruto, while his savant-like skills on the court, and intrinsic trust of Kageyama have yet to be shaken. Certainly he goes through the same issues as the rest of the team in the final episode, but I feel there’s yet to be some interesting character growth in him. 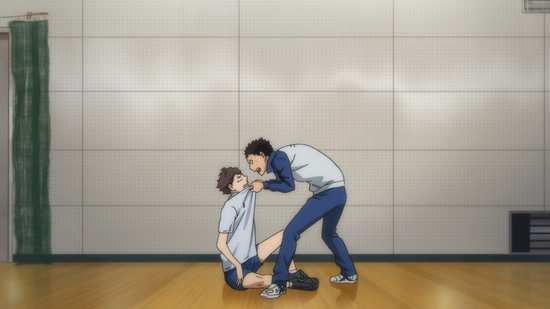 When I finished watching Part 1, my first instinct was to watch it all over again straight away. But those thirteen episodes were about setting up the premise, introducing the characters, and getting to grips with the dynamics between them, the direction of the story. It’s the origin story, which every superhero movie ever made, tells us is more interesting than anything the sequels put out. Part 2 is just as much fun, but we’re getting down to the serious business of volleyball matches here; it’s an anime sporting event, and I find that I’m more reluctant to re-watch these episodes straight away. I’ll give it another go in a few months or years, and will then learn how well Haikyu!! stands up to a re-watch. One thing is for certain though, Season 2 can’t come to home video soon enough!