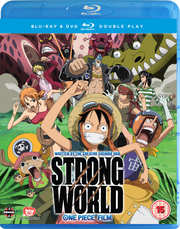 Review for One Piece The Movie: Strong World

It came as a very pleasant surprise when Manga Entertainment picked up the One Piece franchise for UK release, probably the biggest anime in Japan. We’re starting right from the beginning with the TV show, and even though we are already up to episode 156, that only scratches the surface of the 600 plus episodes of the series out there, a number that only continues to grow each week of course. And with a phenomenal franchise such as One Piece, it isn’t just limited to the television series; it gets special episodes, OVAs and feature films as well, and in the 15 odd years that it has been running on Japanese television, that amounts to some 13 movies. And Manga Entertainment is starting right from movie 10? Indeed, the first film that we get here will be One Piece Movie: Strong World, which is set way in the future of the run. If all you have partaken of is the television series as released by Manga, and have somehow managed to avoid the manga comic book releases, then you might be at something of a loss when it comes to where the characters are in the film, and indeed some unexpected additions to the Straw Hat Pirates, and a wholly different ship too. Not to worry, as Manga Entertainment will be going back to the beginning, and releasing the first nine movies as well, in three triple pack DVD releases. Most of them haven’t been dubbed, or indeed released in the US, which makes them something of a UK coup. But Strong World has had a US release, it has had a dub, and it has had a Blu-ray release too, which is why we start off with it first, so we can get our first taste of the Straw Hat Pirates in HD! 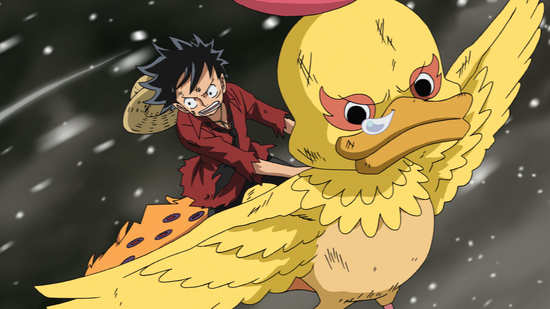 Monkey D. Luffy wants to be a pirate. No he wants to be the best pirate of them all, sail the Grand Line, find the legendary One Piece treasure left behind by Gol D. Roger, and become the Pirate King. He’s inspired in this by his mentor, Red-Haired Shanks, who saved his life when he was a child. He also ate the Gum-Gum fruit, a devil fruit which has given him stretchy rubber limbed abilities, although at the cost of his ability to swim. You’d think this would be a fatal handicap in a pirate, but Luffy has set sail nevertheless, looking to gather the best crew on the high seas, and venture forth onto the Grand Line. With him are his crew which include the mighty pirate-hunter swordsman, Roronoa Zoro, the skilled, pirate-hating thief Nami, the world’s greatest liar, Usopp, and the toughest chef around, Sanji, as well as the fatally cute Tony Tony Chopper, the enigmatic Nico Robin, and newcomers for UK audiences, Franky and Brook. 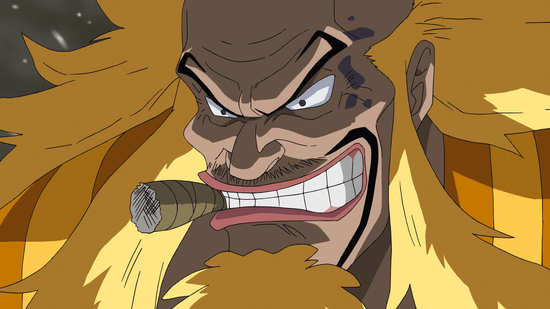 The legendary pirate Shiki the Golden Lion has returned after 20 years absence. The only man who could tame and capture him was Gol D. Roger, after which Shiki promptly escaped by cutting off his own legs to escape his shackles, buoyed up by the powers of the gravity defying Float-Float fruit. The world thought he had vanished into the mists of legend, but he announced his return by upending the Navy fleet. He has plans for world domination, plans he has been working on for the last twenty years in his own kingdom of floating islands, but the one thing he needs is an ace navigator. When he encounters Luffy and his crew, and sees just how good a navigator Nami is, he’ll do anything to have her, including kidnapping her, and stranding Luffy and his crew across his floating kingdom, facing certain death against the weird menagerie of animals there. For Shiki’s kingdom is truly a world where only the strongest survive, as with the aid of the IQ flower, he’s been advancing the evolution of animals to create a fauna army that will devastate all in its path, and his first target is the East Blue, Luffy’s home. But if you think Luffy is going to give up his navigator that easily, you’ve got another thing coming! 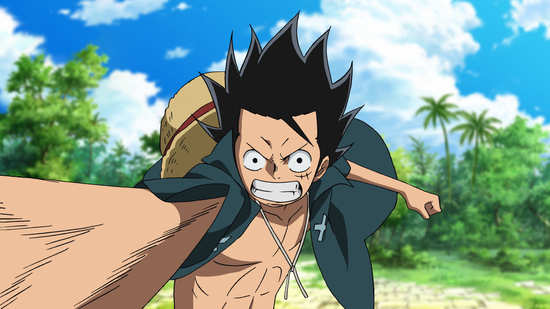 The 10th One Piece movie comes to us on Blu-ray from Funimation via Australia’s Madman Entertainment. The film gets a 1.78:1 widescreen transfer at 1080p resolution. The image is clear and sharp throughout, with sublime and atmospheric colours, an engaging world design, and familiar, if a little older (Nami has a serious front aspect now) character designs, and that fantastic menagerie of uber-Darwin-ed animals. A change from the TV series is that the ships and the like are now established with copious CG. The transfer is excellent, with no signs of compression or visible banding. The image is detailed and looks fantastic in high definition, and given the amount of things flying into, or out of screen, the one question (much though I hate the format) is why it wasn’t released in 3D?

The images in this review are sourced from the PR and aren’t necessarily representative of the retail release.

You have the choice between Dolby TrueHD 5.1 Surround English and Japanese with optional translated subtitles and a signs only track. The movie gets a full-throated surround track that presents its action with dynamism and impact... once you turn the volume up. I watched the Japanese version, and had my receiver at double its normal volume to get a comfortable listening level. The film also gets a very appealing music soundtrack that offers a little different from the usual One Piece experience without losing the essence of the show. The subtitles are free of typographical error, although the timing can on occasion be off, with a double barrelled sentence getting half a caption, and then the next short sentence getting the rest of the previous sentence translation, as well as its translation in a long caption. It doesn’t happen too often, but it is noticeable. 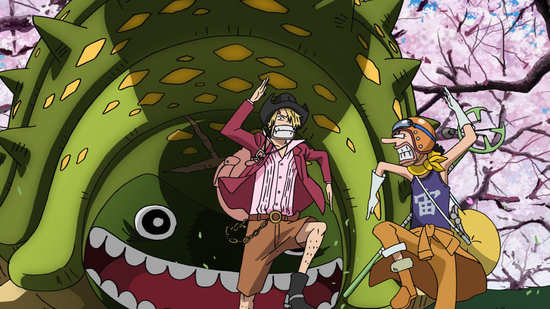 The film is presented with an animated menu on this disc.

Behind the Scenes of One Piece: Introducing Brook should have been more accurately named “Behind the Scenes of One Piece: Introducing Brook’s Voice Actor”. This featurette has some rather muffled and incoherent soundbites from some cosplaying fans bookending an interview with Mike McFarland ADR director, Brina Palencia (Tony Tony Chopper), and introducing Ian Sinclair as the voice of Brook. What I was hoping for was a brief catch up to tell us about Brook, his backstory and how he joined the crew, to create some context for the character, and indeed for that matter Franky as well. Instead it’s some of the usual actor back-slapping which doesn’t really prepare you for the time skip in the movie. This lasts 20 minutes and is in HD.

You also get the US trailer for the film, an Australian anti-piracy thank you, and AU trailers for the K-On! series, and the K-On! movie.

Strong World is a spin-off from a mainstream shonen action series, albeit the biggest shonen series in the world. It’s the equivalent of the summer blockbuster, an anime multiplex filler, designed to give fans just what they are expecting. It’s a standalone story with oodles of action, a quick burst of all that makes One Piece special and unique, all the characters get their moment in the limelight, a coherent narrative in two hours, and when it’s all over, it has absolutely no impact on the ongoing storyline. Just like with all such films, it’s pure filler, stuff created outside the manga narrative, with the difference that it has the budget and script to make it special rather than disposable, memorable rather than forgettable. One Piece Movie: Strong World’s key selling point is that its story was crafted by the manga creator Eiichiro Oda, which probably gives it more in the way of authenticity than the usual filler, and you can certainly see more of the trademark wackiness in the story, the characters, and the ‘Strong’ world that he creates. 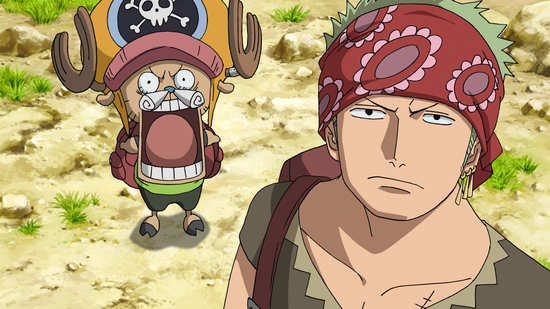 The story itself is simple, Nami gets kidnapped, Luffy will do anything to rescue her, face any challenge, and as per anime convention, the challenge that Shiki represents is greater than any before, the stakes are higher than ever. So ensues a whole lot of action set pieces as Luffy and the other Straw Hat Pirates face these challenges, and along the way, they wind up helping a downtrodden people, and inadvertently save the world in the process. This being One Piece, there’s also a whole lot of heart to the story too. You can empathise with some of the guest characters, the loyalty of friends is tested, that sense of family is renewed, and you know that people will be biting down on quivering lower lips to keep from crying, and failing to do so. Also, with this being One Piece, there’s oodles of comedy too, and I was laughing more often than not watching this film. It’s something as simple as one of Shiki’s minions, a clown like scientist, making a fart noise with every step he takes. Juvenile though it may be, it’s still funny. 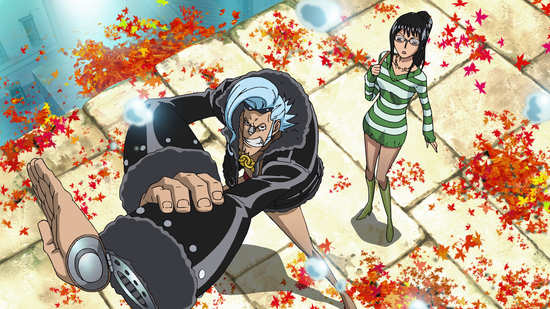 The bottom line is that One Piece Movie: Strong World is fun. It’s a bit of mindless entertainment to be sure, but there are times that you just want to chill down in front of a popcorn flick, be thrilled, be enthused, be entertained, and be moved. You don’t have to analyse each moment for hidden depths, you just enjoy the film at face value. There is the fact that it is set long after the point at which we have reached in the TV series. Character designs have changed, new characters have been added into the mix, and existing characters have new abilities to wield in battle. It might make you wonder just what you’ve missed out on, but the best advice is to forget about it and just enjoy the film. On the strength of this tenth film, I can’t wait to get my hands on the first nine as well.