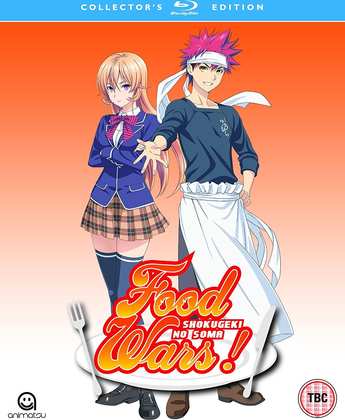 The anime is beginning to flow again after a couple of weeks of full season collection roadblocks; at least I’ve got more than one new review to go this week. Having said that, Food Wars Season 1 is another 24 episodes of anime in one batch. It also caught me by surprise, as having watched the Ben-To series, I had the mistaken impression that Food Wars would be another take on the fighting over pack-lunches premise. Ben-To was fun, but it’s a one joke show, and there’s only so much mileage you can get out of taking that sole joke to visual extremes. Food Wars turned out to be completely different. It’s not about the getting of food, it’s about the making of food, and if you’ve seen shows like Masterchef or the Great British Bake-Off, you’ll know just how invested audiences get in seeing a cook pull off a culinary masterstroke. Food Wars is all that, and anime too. Click on the review to salivate like Pavlov’s dog. 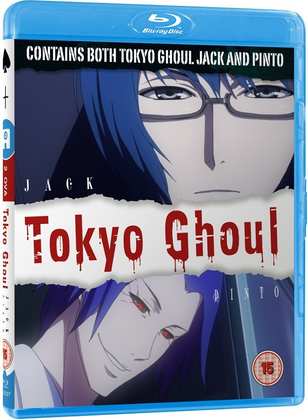 My next review is about eating as well, eating human flesh that is. We’ve had the first two seasons of Tokyo Ghoul in the UK, a tale about a society of the supernatural flesh eaters co-existing with (and occasionally eating) humans in the big city. It was a show that made a big impact, and now we get the Tokyo Ghoul Jack & Pinto OVA collection, two spin-off episodes that serve as stand-alone prequel stories to that series. It’s a disc that is a UK-Australian co-author, and we’re getting in first, before the USA for whom it is yet to be licensed. Naturally that means we don’t have a dub. 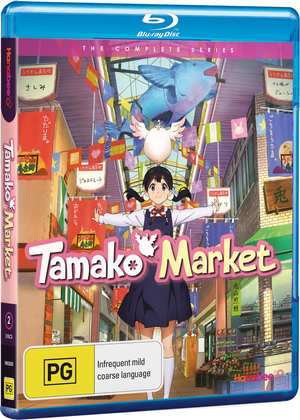 Then I managed to reach into my collection to review Tamako Market, a slice-of-life series from the creators of K-On! In fact it was touted as the ‘next K-On!’ when it was initially broadcast, with a cast of cute and eccentric characters, during cute and silly things. It centres on a girl who lives above the family sweet-shop in a shopping arcade, her love of the sweets called mochi, and her zany circle of friends. And into this world flaps in a talking bird who’s looking for a princess for the prince of his tropical island home. Tamako Market is actually better than that description sounds, but click on the review to see if it’s actually as good as K-On! 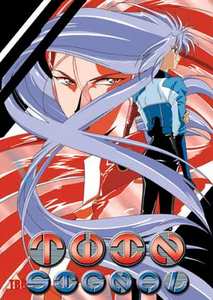 Twin Signal. There’s a comedy trope that you don’t see a lot of in anime anymore, the character saying or doing something outrageous, the 3-second pause, followed by everyone falling over rigid in shock. There was a time when every anime comedy was a zany comedy with far-out characters, and you could count on that certain style of humour, the egregious wackiness. Slayers is a prime example, but you’d see it in shows like Gestalt, Ghost Sweeper Mikami, Dragon Half and countless others. Then anime comedies got more sophisticated and gained in variety. Twin Signal on the other hand slots right into the classic wacky comedy category. It’s also when a lot of shows went straight to OVA with the hopes of a television series resting on its success. That obviously didn’t happen in Twin Signal’s case, but it’s an entertaining enough three episodes, the tale of a boy and his robot, created to keep him company. At the best of times Signal is a tall, elegant, combat robot, but if Nobuhiko sneezes, Signal transforms into a cute, chocaholic baby. The story revolves around a rival scientist trying to steal the secrets of Signal’s creation from Nobuhiko’s grandfather... and much silliness ensues.

MVM released Twin Signal in the UK in 2006, and it is deleted, so second hand would be your best bet at this point. It’s also equally deleted in the US if you’re thinking of importing.

Animatsu released Food Wars Season 1 on Blu-ray and on DVD on August 28th. That’s when All the Anime released Tokyo Ghoul: Jack and Pinto OVAs on DVD and on Blu-ray, while their shop exclusive Collector’s Edition is up for pre-order at this time for release later on this month. Australia’s Hanabee Entertainment released Tamako Market on Blu-ray and DVD in 2016.