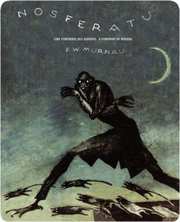 Silent horror classic Nosferatu: A Symphony of Horror comes to DVD and Blu-ray this October 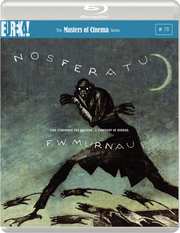 It's becoming a bit of a dark week here isn't it, as the winter nights begin to slowly draw closer, for the third day in a row we have a title with a dark edge to it. And another from Eureka! Entertainment in their Masters of Cinema collection.

So if you don't fancy modern halloween offerings, then perhaps the silent 1922 classic Nosferatu: A Symphony of Horror is screaming out for a purchase on 25th October.

Directed by F. W. Murnau, this stars Max Schreck and comes with a newly remastered and restored transfer, in 1.37:1 1080p for the Blu-ray version, plus the obligatory 56-page booklet with writings and rare imagery.

The recommended retail prices for the three versions are £19.99 for the DVD and Blu-ray editions, with the Steelbook that contains both these retailing for £29.99.

An iconic film of the German expressionist cinema, and one of the most famous of all silent movies, F. W. Murnau’s Nosferatu: A Symphony of Horror continues to haunt, and indeed terrify, modern audiences with the unshakable power of its images.

By teasing a host of occult atmospherics out of dilapidated set-pieces and innocuous real-world locations alike, Murnau captured on celluloid the deeply-rooted elements of a waking nightmare, and launched the signature Murnau-style that would change cinema history forever.

In this first-ever screen adaptation of Bram Stoker’s Dracula, a simple real-estate transaction leads an intrepid businessman deep into the superstitious heart of Transylvania. There he encounters the otherworldly Count Orlok, portrayed by the legendary Max Schreck, in a performance the very backstory of which has spawned its own mythology, who soon after embarks upon a cross-continental voyage to take up residence in a distant new land and establish his ambiguous dominion.