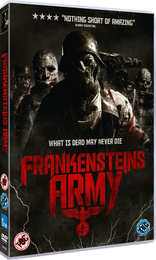 The horror genre is an interesting one, it mostly sticks to tried, tested and done to death formulas, but sometimes somebody decides to go a bit mad and make something different. We have no idea how different this is beyond the idea, but some of the clips look fun anyway.

Yes, fans of crazy doctors making monsters out of humans and machinery can rejoice as Entertainment One have announced the release of Frankenstein's Army on DVD this coming 30th September.

With a runtime of 81 minutes, extras will include a 30 minute making-of featurette and trailer, whilst the recommended retail price will be £12.99.

Synopsis and trailer which includes a monster with a propeller on his face follow...

Whilst pushing into eastern Germany toward the end of World War II, Russian soldiers unearth a secret Nazi lab that has begun experimenting with the journal of one Dr. Victor Frankenstein.

The scientists have used the legendary Frankenstein's work to assemble an army of super soldiers stitched together from the body parts of their fallen comrades and a disturbing fuse of apparatus and machinery, a desperate Hitler's last ghastly ploy to escape defeat.