Review of Elizabethtown
added by
Ian Davidson
Places to Buy

DVD
Get Over It (UK) 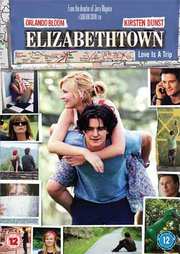 Synopsis:
Though it revolves around death, Cameron Crowe`s hotly anticipated follow-up to `Vanilla Sky` is optimistic overall, beaming with the same life-affirming mood as the crowd-pleasers `Jerry Maguire and `Almost Famous`. Promising young shoe-designer Drew Baylor quickly learns how failure feels when his innovative but foolish design for a winged sneaker becomes the humiliation of the footwear industry. Informed of the magnitude of his mistake, Drew applies his design skills to the task of suicide by duct-taping a knife to an exercise machine. This melodramatic act is interrupted, however, when Drew receives a call from his sister, informing him that his father has died while on a trip to his home town of Elizabethtown, Kentucky. Drew`s mother, Hollie, elects him to go deal with the arrangements because he is the responsible and successful one. The only passenger on his flight, Drew meets Claire, a perky stewardess, who takes the opportunity to talk his ear off despite his apparent desire for some personal space. Supplying Drew with detailed hand-drawn maps, instructions for how not to get lost, and three phone numbers where she can be reached, Claire tenderly sends him off to confront a town full of relatives he has never met. Once in Elizabethtown, Drew is subjected to relentless family wackiness from people who seem to have known his father better than he did. Meanwhile, he stumbles into a hesitant romance with neurotic but charming Claire, whose anal-retentive wisdom, lust for life, and good taste in music may help Drew come to terms with his newly diminished place in the world and to see it as possibly a better one. A love story, family drama, and road trip in one, `Elizabethtown` boasts another of Crowe`s excellent soundtracks, with artists like Tom Petty and Elton John giving the film much of its emotional drive.