New: £31.03
Used: £0.02
Mrs Brown's Boys Live - Nice Big Box - the live shows from the Smash Hit BBC Series Region 2 Encoding (This DVD Will Not Play on Most DVD Players Sold in the Us or Canada [Region 1]. This Item Requires a Region Specific or Multi-region DVD Player and Comp
Not available 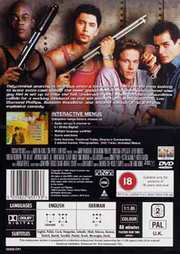 Back Cover of Big Hit, The
Related Items 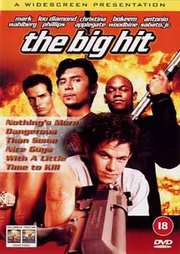 Synopsis:
The criminal anarchy is hilarious when a foursome of full-time hit men looking to score extra cash kidnap the boss` goddaughter.

And when beleaguered wise guy Mel is set up to take the fall, underworld antics and domestic absurdities collide for a working weekend no one will soon forget.

Just correcting Ade Taylor`s review of this film... Mark Wahlberg`s brother DONNIE Wahlberg was the guy from New Kids on the Block, not Danny (even though they did have a member called Danny), and Mark was in the group for a few weeks when they first got together. OK, enough with my embarrassing knowledge of boy bands...

The Big Hit is just one of those films that you have to leave you brain behind before settling down to watch. It`s action packed with some great stunts, but the story, the setting and the acting is completely over the top. The trouble is, with the director`s commentry on the DVD it`s not so `OTT funny` because you get the impression that they`re being serious about the whole thing - during the tacky scene where Mark Wahlberg and China Chow are simultaneously stuffing a chicken the director/producer sincerely says "ah, this is a very important scene...", and they don`t even bother to make any sort of acknowledgement to the comical side of any aspect of the film.

It`s hard to say who`ll like this film. You`ve just got to have the rather odd sense of humour, and like me, fancy the pants off Mark Wahlberg (still not as attractive as his aforementioned brother though). The DVD has plenty of extras, as Colombia Tristar seem to realise how to use the format as it is meant to be used with their other titles such as Dracula and Ghostbusters. Unfortunately the deleted scenes are nothing to rave about, the trailer is boring and the director`s commentry should at no time be taken seriously at all. Still, I rented this film on VHS and laughed so much, I just had to buy it (it is still not available to purchase on VHS though).
posted by EllieHM on 27/2/2000 11:42
9 / 10

i didnt expect much from this movie.but it is genuinely funny with good action scenes good special features and worth watching again.the acting is good for this type of film.comedy action thrillers come no better than this think grosse pointe blank john woo style
posted by flair on 15/11/2000 18:13