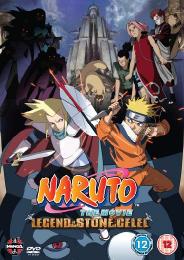 Naruto the Movie 2: Legend of the Stone of Gelel (DVD Details)

Other Reviews, etc
Places to Buy
Naruto The Movie 2: Legend Of The Stone Of Gelel [DVD]
Manga Home Entertainment

Naruto the Movie 2: Legend of the Stone of Gelel

It looks as if Manga Entertainment have started a new, if short-lived Christmas tradition, the Naruto feature film. I say short-lived as there are at the time of typing only four Naruto movies, of which this is the second. Still, it's something to look forward to, after a year's worth of small screen ninja action, heavy on the continuity and flashbacks, pausing once in a while to get a little pseudo-philosophical. It's nice to just revel in some widescreen full-on ninja action with a full-on theatrical budget, without having to worry about an over-reaching story, and how all this relates to some obscure event in the main character's life ten years ago. I guess the flipside of the coin is that if you are into the main storyline, then watching the film will add absolutely nothing to it. However, the second Naruto movie, just like the first has its place in the overall chronology, and by releasing it at December, Manga are getting just a tad ahead of themselves. There aren't all that many spoilers to be had though, but if you do wish to look away until the TV series catches up with the movie, then I guess you'll have to put the DVD to one side until after Season 5 has finished. There may be one or two spoilers to be inferred from the synopsis, but I'll try and keep them to a minimum. And as I've already said, this movie stands to one side of the series continuity. Nothing of meaning happens in the film in that respect. 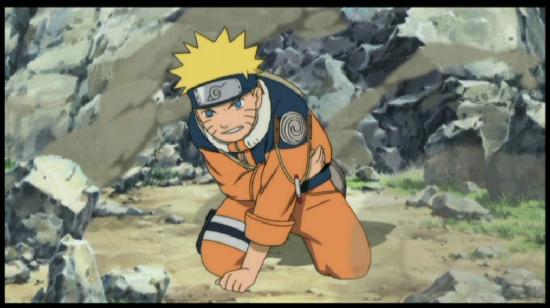 Several years previously, the Hidden Leaf village was plagued by the Nine-Tailed fox demon. The Fourth Hokage ninja sacrificed his life to defeat the menace, and sealed up the spirit in the body of a newborn child. That orphan grew up as Naruto Uzumaki, a mischievous prankster with great ambition. Not only does he want to be a ninja, but he also wants to be the strongest ninja of them all and be granted the title Hokage. He has more than a little competition, the Hidden Leaf village is a community of ninja, and Naruto had great difficulty just passing his entrance exams to qualify as a lowly Genin. Even when he did manage to get his certification, he was assigned to undergo training by the demanding Kakashi, partnered with his rival Sasuke and Sakura, the girl on whom he has a crush. 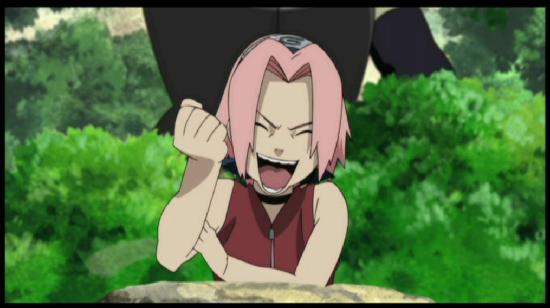 We catch up with our heroes some time after Season 5 as I mentioned, as Shikamaru leads Naruto and Sakura on a mission to return a pet ferret to its owners. It isn't long before that mission is forgotten, when they come across the ruins of a village, utterly decimated by some unknown force. It's a full-blown invasion, as they are ambushed by a group of gargantuan armoured knights, apparently immortal. A young man in armour named Temujin leads them. The battle that ensues leads to the Hidden Leaf Ninjas being separated, and a heavily bandaged Naruto wakes up with Temujin in a nomad encampment. Meanwhile Shikamaru orders Sakura to find Naruto, while he investigates a massive mobile fortress that appears in the vicinity. The fortress is Temujin's home base, as Shikamaru finds out when he sneaks on board. Naruto also learns that Temujin serves a master named Haido, who seeks to end all war by establishing a universal Utopia. But to do that, he needs a legendary stone named Gelel, which will give him enough power to reign supreme over all others. To aid him in his quest, Haido picks up the stray orphans and lost victims of war and recruits them to his bold purpose, just as he found Temujin. But Haido's methods leave much to be desired, and the nomads find Temujin strangely familiar. 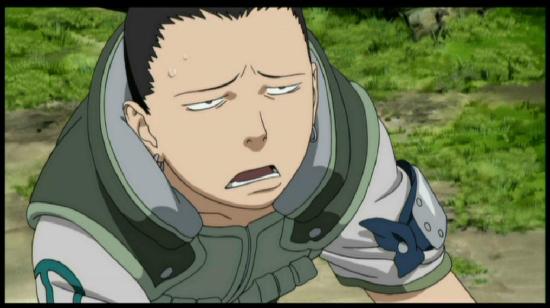 Once again, Naruto's transition from the small to the large screen is suitably impressive, with far more fluid character animation, a significantly more detailed world design, and a much greater depth and strength to the backgrounds. 3D CG is effortlessly blended with 2D animation to offer something that truly fills its scope, and odd touches like the mediaeval armour of Temujin and his allies, added to the Mayan feel of the Gelel legend all work to make this much bigger than the television series that spawned it.

Thankfully the 1.85:1 anamorphic transfer is a significant improvement over the treatment that the first film got. This time around there is a far greater clarity and strength to the transfer, the image is clear throughout, and motion blur is non-existent. The only signs of an NTSC-PAL conversion are some slight juddery moments during the pans and scrolls. There is also a tendency for compression in some of the more frenetically animated moments, but that seems to be a universal problem with animated DVDs. 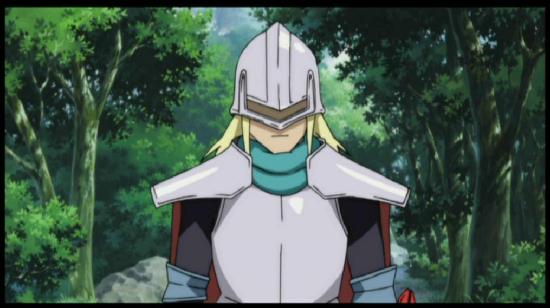 You have a choice of DD 5.1 and DD 2.0, both in English and Japanese along with optional translated subtitles. The surround tracks are the way to go, as this film has plenty of action to take advantage of your surround set up. I did find that in the Japanese track, the dialogue often became buried under the sound effects and the music, leaving me to be constantly on hand with the remote control whenever an action scene presented itself. This was less of a problem with the English dub though, which has a more balanced mix.

Import the two-disc version from Viz in the US, and you get a commentary, and a whole heap of featurettes and production art.

The second Naruto movie is upon us, and it's all a bit of good fun in the end. What you want to see is some good guys and some bad guys, a whole lot of ninja action and a fair bit of comedy too. Naruto whips out his trademark Rasengan and Shadow Clone moves on more than one occasion, Sakura gets to blow stuff up, and Shikamaru strategises. We even get to see Gaara of the Sand Village in action, and this time he is firmly on the side of the good guys. Of course facing them are some formidable foes, capable of strong feats on their own, charged up with the mythical power of the Stone of Gelel, and the fight sequences are suitably frenetic, action packed, and explosive. And for the sake of the character drama, there is a tale of redemption and discovery at the heart of it all. 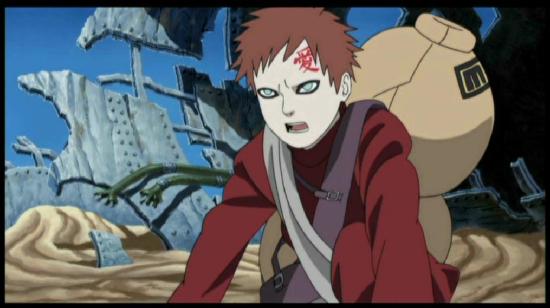 But please, please, please don't give this film any more than just a surface thought. Just take it at the absolute barest of face value, as if you actually spend more than five seconds thinking about it, it becomes obvious that all the filmmakers did was to take a heap of pop-culture references, classic stories, legends and myths, chucked them in a blender, and then presented the resulting slurry to us as a feature film. 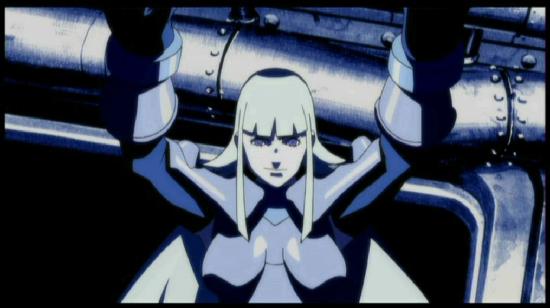 We have the mediaeval looking knights that invade (note that Temujin was Genghis Khan's name), a nomadic tribe that ride ostriches and use rhinos as beasts of burden, A steampunk looking mobile fortress, powered by humans hooked up in large glass bubbles (very Matrix), a villainous werewolf, and a vampire, an ancient civilisation built around the Stone of Gelel, looking very Mayan, and reading a lot like Atlantis. Then there is the Stone of Gelel itself, which may as well have been called the Philosopher's Stone, but with that ninja Harry Potter descriptive for Naruto, it may have left one too many avenues for litigation. Of course there is that ending, and if I didn't know any better, I'd be wondering if George Lucas watched this before starting on the last Indiana Jones film. 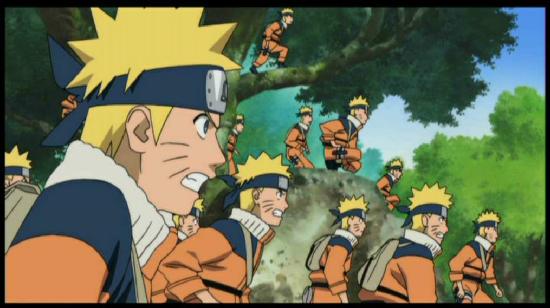 Of course it's filler. Anything not directly associated with the manga storyline can't do anything to effect it, so this film has to end where it begins in terms of character development. It all boils down to how entertaining an experience this film presents. And despite the utter mish-mash of a story, and despite the occasional suspicion that they didn't actually finish the film (some bits appear to be missing, they never actually show Sakura finding Naruto, and instead just jump ahead and assume it is a fait accompli), The Legend Of The Stone Of Gelel is an entertaining, and satisfying experience that wholeheartedly delivers on the sort of action that Naruto fans expect from the luminous orange ninja.