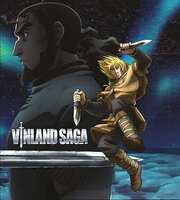 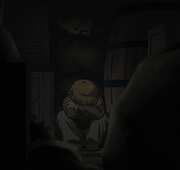 This is a title that I have been a little daunted by when it comes to watching it for review. For one thing, mediaeval historical fantasy drama isn’t one of my favourite genres when it comes to anime. ‘Swords minus the sorcery’ has never really tantalised, although I must admit the irony of Berserk being one of my favourite anime shows. And favourable comparisons have been made between Vinland Saga and Berserk. Also, often when I’ve wandered through the manga shelves of my local library, I’ve marvelled at the spines of the Vinland Saga books. Most manga looks to be disposable, roughly bound paperbacks with cheap quality paper (which as originally designed would have been cheap enough to buy for a few pennies, and then binned, not carefully husbanded in much-loved collections). But Vinland Saga gets hardcover presentation, with gorgeous artwork, and high quality paper. It’s meant to be loved, and passed down in family inheritances. That just screams importance, and demands special attention... As I said, daunted. 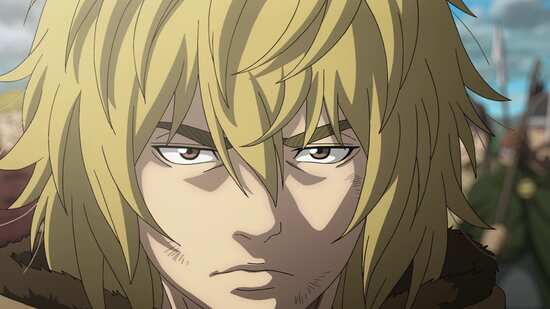 Towards the end of the first millennium AD, Thorfinn is a young boy growing up in Iceland, a Danish colony that tries to stay out of politics. That’s not easy when Danish sea power dictates politics in Northern Europe, with the Vikings raiding and establishing settlements in England. Little did Thorfinn know that his father Thors was a great warrior before he escaped service and established his family on peaceful Iceland. 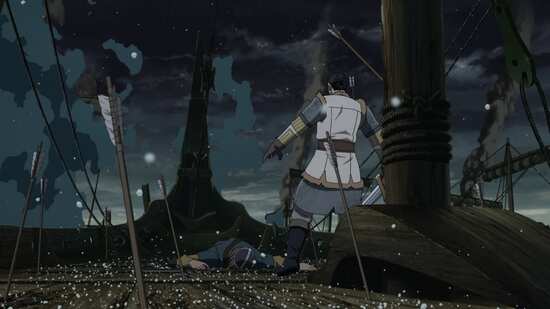 It came as a rapid education when the war washed up on their shores, and the king demanded that Thors return to service. Worse, Thors was betrayed by a so-called friend that feared his return, and the pirate Askeladd was paid to murder Thors. Thorfinn swore to avenge his father, but the only way to do that is to sign up with Askeladd, and learn everything he knows, in the hope that one day he’ll be strong enough to defeat him in a duel. 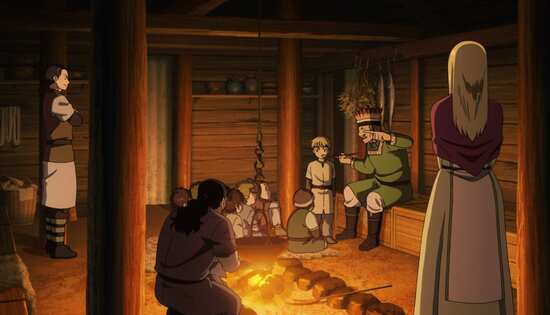 24 episodes of Vinland Saga Season 1 are presented across three Blu-rays from MVM. 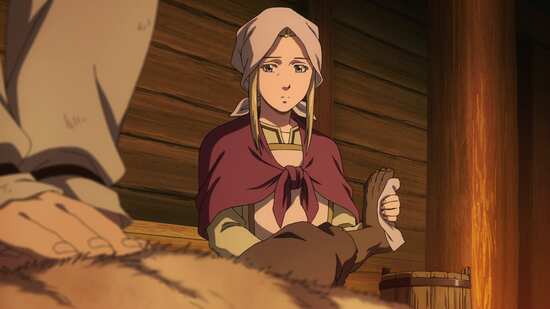 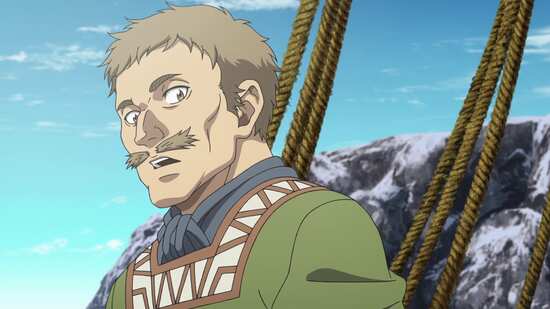 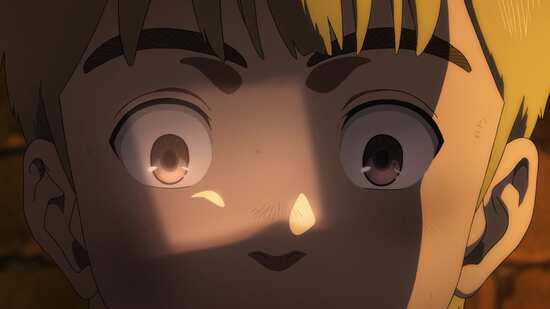 Vinland Saga gets a 1.78:1 widescreen 1080p transfer on these Blu-ray discs. The image is clear and sharp, with strong, consistent colours. There is no sign of compression or aliasing, and digital banding is kept to a minimum. That’s good, as Studio WIT of Attack on Titan renown do the honours when it comes to the animation, and they offer vibrant, detailed and fluid action, coupled with effective character designs to really sell the story. They also don’t stint on the gore, pretty much essential when it comes to a show about the Vikings. 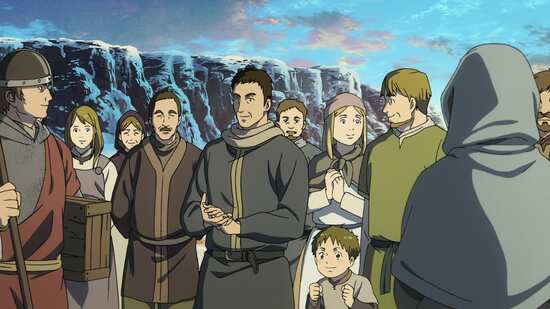 You get the choice between DTS-HD MA 2.0 Stereo English and Japanese, with subtitles and signs locked during playback. The audio is fine, I was happy with the original Japanese track that I selected, and the action and the music find enough space to breathe in the stereo format. The dialogue is clear, and the subtitles are accurately timed, but there are a couple of spell-check evading typos. The show gets some really nice, and appropriate theme songs, and I didn’t want to skip an opening or closing once. Note that this show debuted on Netflix, who gave it a dub on that service, but Sentai had to dub it again for their release, and that naturally is the dub on these discs. 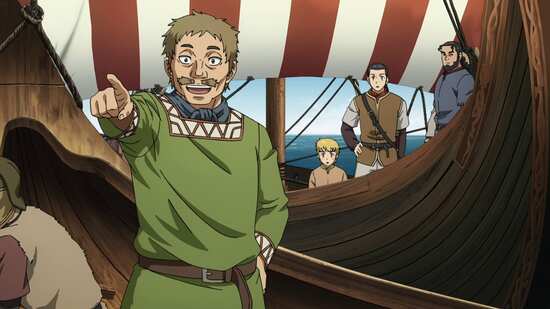 The discs present their contents with static menus, and each episode is followed by a translated English credit scroll.

The extras are all on disc 3, and comprise 4 textless openings, 3 textless closings, 4:20 of Japanese Promos, and trailers for SWORDGAI, Babylon, 7 Seeds, and Dororo.

I haven’t seen the packaging or the physical extras in this collector’s edition to comment, although the idea of a 176-page artbook is pretty enticing. 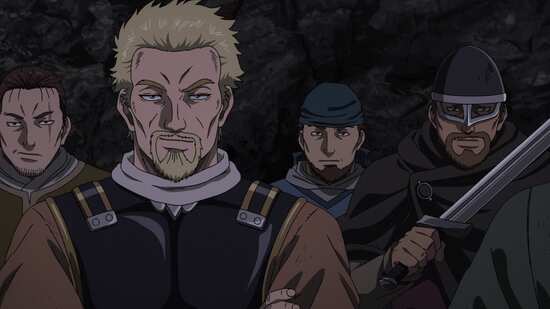 If the prospect of watching this show wasn’t daunting enough, 24 episodes in, and we get the “END OF THE PROLOGUE”! Ten hours worth of prologue suggest that there is a whole lot of story yet to come. There is a second season in production, due to air in January 2023, although not having read the manga, I have no way of knowing if it will live up to this prologue. What I can say is this first season of Vinland Saga is one of the best anime I have seen in quite some time. This is definitely worth getting, satisfying in its own right as it tells the story of main character Thorfinn’s childhood. There’s plenty of action, and some of the best yarn-spinning I have seen in anime. 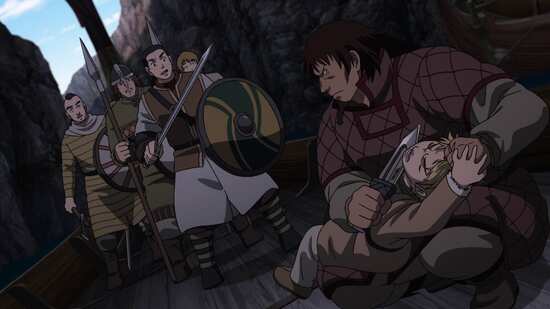 The worst case scenario is that Vinland Saga turns out to be just like the story that it is often compared to, Berserk, in that the prologue, the Golden Age is spectacular, and everything thereafter has its work cut out living up to that. The best case is that Season 2 of Vinland Saga and beyond is just as good if not better than Season 1, although I have a hard time contemplating how ‘better’ be possible. 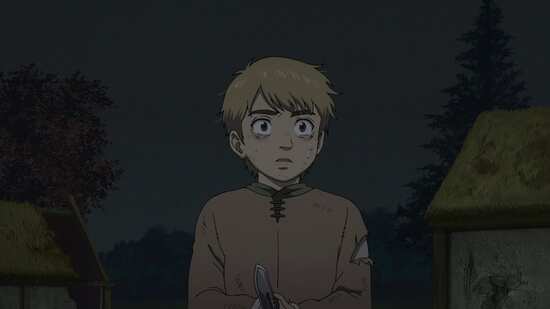 The only ‘flaw’, that I could find with Vinland Saga was the constant temptation to pause the show and refer to Wikipedia. Vinland Saga is historical fiction, and as such, many of the characters within were real people, although the story takes as much liberties with the details of history as Mel Gibson’s Braveheart. The difference here is that Vinland Saga is set during the closing years of the so-called Dark Ages, that period between the fall of the Roman Empire and the Norman Conquest, when Saxons prevailed in England, and whose wooden architecture has so rotted away (as Time Team told us) that there is hardly any historical evidence of the period... hence the now discredited term, Dark Ages. 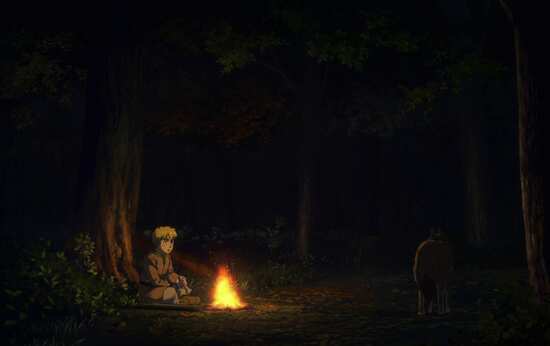 The first thing that Vinland Saga taught me was that there was a period where the Vikings actually conquered the Saxons, and Denmark ruled in England, and King Canute was a Dane. If the last few paragraphs have been shy of my enthusiasm, I’ll plainly say now that I love stories like Vinland Saga!

This first season follows the story of Thorfinn from childhood to early adulthood, introducing the son of a warrior who grows up on tales of battle, and on tales of exploration as related by Leif Erikson, who reputedly established a Norse settlement in Vinland, the Northern United States 500 years before Columbus. In frozen Iceland Thorfinn grows up dreaming of the lush, open plains of Vinland, and idolising his warrior father Thors, as he guides their settlement through whatever adversity throws their way. 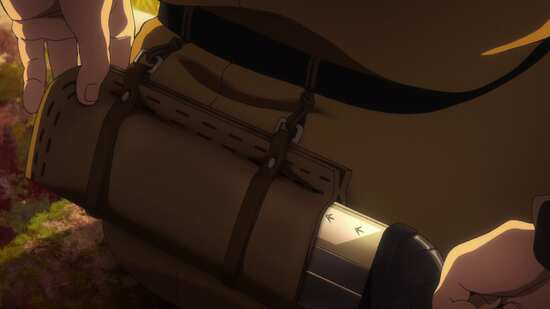 All of that changes when the Danes intensify their invasion of England, recruiting veterans for the fight, including Thors. But Thors is betrayed by a former comrade in arms, who jealous of his return pays mercenary Askeladd to kill him. Thorfinn witnesses this, especially the sneaky way Askeladd wins the duel, and immediately swears to kill Askeladd. That’s hard to do for a child not strong enough to even hold a sword, so Thorfinn’s only choice is to essentially join Askeladd’s band of mercenaries, to learn from him, growing up fighting his battles, until he’s strong enough to challenge him to a duel. He refuses to be sneaky in turn, and just murder him in his sleep, and instead keeps confronting Askeladd, to be repeatedly defeated by the stronger man. 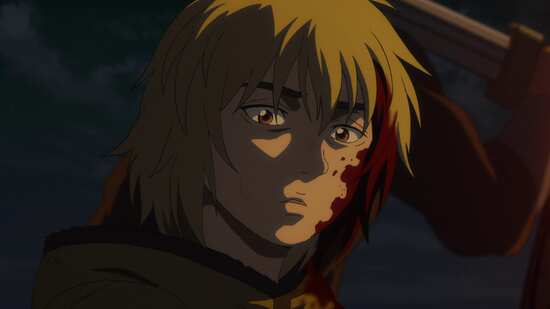 I must state that for much of this season, Thorfinn isn’t actually that interesting as a character. He’s in it for the revenge, and comes across as a barely controlled ball of rage at the best of times. It’s Askeladd who is the interesting one, and really the focus of the story. Right from the beginning, he comes across as a manipulator and a schemer, with plans within plans, which makes how he relates to Thorfinn, who only wants to kill him, really curious. Part of that is his heritage, as the son of Thors, but there is something else as well, and Askeladd becomes a mentor to him, albeit teaching by example rather than directly. And in many ways he’s also a warped father figure, the antithesis of who Thors was. 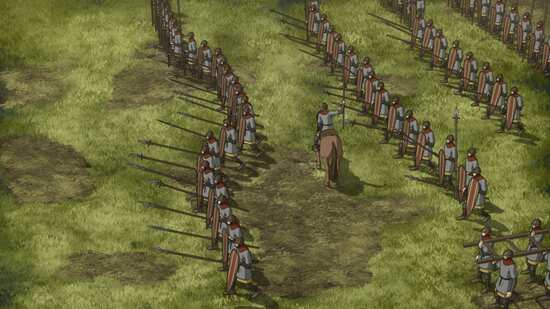 Then there is Askeladd’s identity, his past, and his heritage, which feeds into his schemes. At first, he’s just a mercenary leader who sells his sword to the Danes in their battles in England, but with his strategic mind, and his ability to succeed, he makes a name for himself, and finds a place at the highest levels, at the right side of Prince Canute himself. When we meet Canute, he’s an effeminate introvert, a rare Christian in a society that worships the Norse pantheon, and who’s merely a pawn in his father, King Sweyn’s plan to create an empire to bequeath to his oldest son, Harald. But Askeladd sees a path to power if he can mould Canute into a man who could be king, a resolute warrior instead of a dandy. 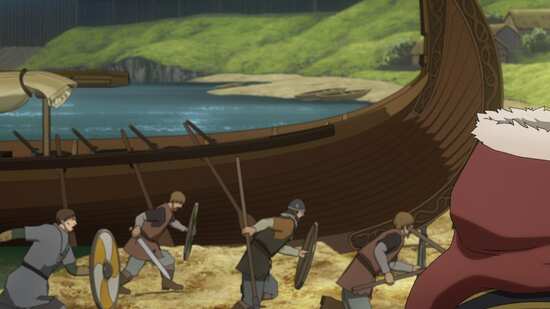 There are plenty of players on the stage, and a whole lot of scheming and politicking, as Vinland Saga fits the prologue of Thorfinn’s story into the Viking invasion and conquest of England circa 1000 AD. It’s compelling stuff, and so easy to binge-watch in just a couple of sittings. I know that there have been a few stories, both film and TV series in this particular genre in recent years, but I’ve contrived to miss them all. The only thing I can compare Vinland Saga to is the old Kirk Douglas, Tony Curtis movie, The Vikings, and this is just so much better than that. 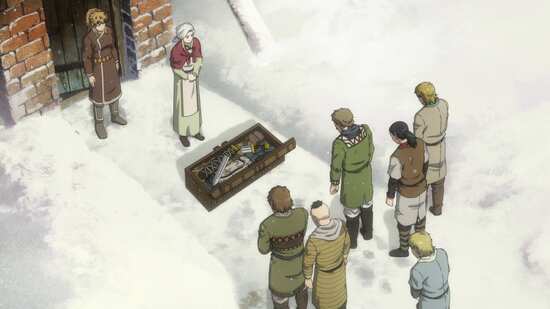 The Blu-ray presentation of Vinland Saga is as good as you would expect, but the actual story makes for one of the best dramatic anime series I have seen in quite some time. Given its real world historical context, I might actually like it a bit more than Berserk. The only downside is that it’s going to be quite some time before we see Season 2 on home video in the UK, but as I said, Season 1 does offer a complete story arc, with no major loose ends demanding to be resolved as the end credits roll. A must buy for anime fans...