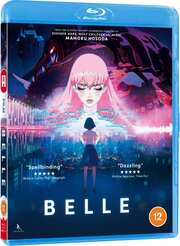 When it comes to mainstream Japanese anime cinema, three names always spring to mind, the master himself, Hayao Miyazaki, and the apparent heirs to his legacy, Makoto Shinkai and Mamoru Hosoda. And yet, for me Hosoda’s career hasn’t quite exploded the way that I expected at first. He’s directed seven feature films including a One Piece spin-off, but he first came to my attention with The Girl Who Leapt Through Time, which was breathtaking and simply astounding. His follow-up, Summer Wars was brilliant, if not quite as superlative. Then came Wolf Children, which was great, if flawed, then there was The Boy and the Beast, which was great if forgettable, and most recently there was Mirai, which was great, if somewhat niche. They are seven movies of which any director would be proud to have just one on their CV, yet with Hosoda, it has felt to me like a career in decline. Now he brings us Belle, which doesn’t inspire me with its synopsis, and does even less with its opening ten minutes. I’m not holding out hope.

Suzu is a girl whose life has been coloured by tragedy. Her mother raised her with a love of music and singing, but at a young age, Suzu lost her mother in an accident, and the trauma left her unable to sing.

When she discovered ‘U’, an online world with 5 billion users, where each user receives an avatar based on their biometric data, the mousy introverted girl found herself in the body of an elegant and beautiful woman, Belle and what’s more, she found that in U, she could sing once more. She quickly garners attention and fans for her fantastical concerts, but she also encounters the beast, Dragon, who everyone loathes and shuns. But Belle sees the heart under the monstrous exterior.

Belle gets a 2.35:1 widescreen 1080p transfer on this barebones disc. You have the choice between DTS-HD MA 7.1 Surround English and Japanese, DTS-HD MA 2.0 Stereo English and Japanese, and stereo English Audio Descriptive, and in an odd move where a single narrator voices over the dialogue, Japanese Audio Descriptive. You can have these with translated subtitles, Hard of Hearing subtitles, or signs only, depending on the audio option chosen, all locked during playback. It’s an excellent, impeccable transfer of a recent film, clear and sharp with rich and vibrant colours, and with excellent detail.

Just like in Summer Wars, the virtual world of U is an imaginative and intricate place, and that comes across without any issue on this disc. I stuck with the Japanese surround track for the duration, and was happy enough with the experience, resonant and immersive, and most importantly bringing the best out in the music. The dialogue is clear, and the subtitles are accurately timed and free of typos, although this appears to be one of those discs where dialogue and screen captions (or secondary dialogue and lyrics) can’t be displayed at the same time. Also taking a leaf from Denis Villeneuve’s book, the end credits are so tiny, that you’ll want a UHD and a real big TV to comfortably read them.

You get one disc in a BD Amaray that has a reversible sleeve. The disc boots to an animated menu, and the only extras on this Standard Edition are two TV spots, 30 seconds and 15 seconds respectively.

If you want extra features, you have to go for the 4K UHD/Blu-ray Deluxe Edition which comes with the movie on this Blu-ray, again on a UHD, with two more Blu-rays devoted to extra features, a delectable soundtrack CD, artcards, an artbook, a poster, and deluxe packaging.

Personally, I can’t condone this move of bundling UHDs and Blu-rays together, and making extras exclusive to severely limited editions. At the very least you should have the choice between UHD and BD, rather than be lumbered with a format that you don’t need. And unlike those days where Blu-ray films were bundled with DVD versions gratis, Anime Limited tend to charge an extra £20 for the privilege of owning both formats, which in this cost of living crisis could price the collection out of the hands of dedicated fans, let alone casual collectors. I suspect many will be holding out for a Christmas sale discount, which this film doesn’t deserve. You shouldn’t put off watching it.

It certainly didn’t start well for me, as it seemed at first that Hosoda was reliving past glories. The film starts just like Summer Wars, with an introduction to the online world of U (not Oz), a place where once again the majority of the world’s population live fantasy, ‘perfect’ lives, albeit an online world where your avatar is defined by who you are in reality, not by your choice. And in the real world we meet Suzu, the tragic protagonist of the film, traumatised from a young age by the loss of her mother, and subsequently alienated from the father who raises her, despite living under the same roof.

When we see her in school, albeit with her best friend Hiro, she’s still in the kind of relationship triangle between two boys (the goofy Kamishin, and the protective Shinobu), that we saw in The Girl Who Leapt Through Time. And with a nod to The Boy and the Beast, the ‘antagonist’ for want of a better word in the online realm is a monstrous being who everyone shuns, but who Suzu as Belle forms a connection with. Speaking of references, the tech used to go online is a confused version of the Sword Art Online or Ready Player One’s immersive VR, although the film isn’t too clear on how it works, or what the rules are, and the story that unfolds in U is so akin to Disney’s Beauty and the Beast that some entertainment lawyers may have been licking their lips in anticipation.

But these are just pieces of a puzzle, and about an hour into the film, I stopped picking at them, I took off the critic’s hat, and was just drawn into the film, for Belle turns out to be Mamoru Hosoda’s masterpiece, his best film so far, surpassing even The Girl Who Leapt Through Time in my opinion, something I thought would never happen.

It is a film for our age no doubt, taking a look at how we interact with the online world in ways that Summer Wars was yet to contemplate, really looking at how social media works, how we only present our best selves online, a falsehood to inspire our ‘followers’ but just as able to provoke envy and negative feelings. It’s a film about identity too, with Suzu, introverted and withdrawn in the real world, finding an identity with which to express herself online, while the identity of the Beast is integral to how the story plays out. Negative, non-conforming characters are shunned in U, and the self-appointed police have a bit of software kit that deletes an avatar and unveils the true real world identity beneath. The Beast doesn’t conform, picks fights, and causes chaos, and as a result they hunt him to reveal his true identity and eject him.

Through this adventure, Suzu goes on a journey of growth and self-realisation, coming to terms with the loss of her mother at such an early age, finding herself as a person, and finally learning the final lesson that her mother taught her, by embodying what she learnt in her actions and decisions. There’s also a powerful message about standing up to bullies that resonates through the film. And the film has a cracking mystery to it that drives all this. Mamoru Hosoda does all this, and he goes straight for the emotional jugular as well, not least with a powerful and emotive soundtrack backed up by a singular and effective vocal performance in Belle’s songs. But the story too ultimately proves by turns heart-warming, and heart-breaking. You’ll need a box of tissues at hand for this film. It’s been a long time coming, but this is the best yet from Mamoru Hosoda, and while Anime Limited’s release strategy confounds me at the best of times, this Standard Blu-ray is great if you just want to watch the film (although why would you buy this if the film is available to stream and you don’t have dodgy internet?)