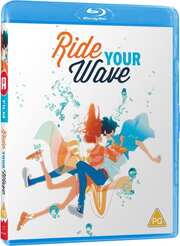 Review for Ride Your Wave

One of the perks of being a small, boutique label is the opportunity to pick and champion a cause, or more appropriately, an auteur. It’s possible for heart and emotion to be invested in decision making in a way that is impossible for a more mainstream and profit minded studio label. It’s a two way thing, with up and coming directors getting a chance to promote their creations, and for labels to benefit as that creator increases in fame and exposure. The sticking point is that audiences have to be on board with that auteur’s work. With a company like Third Window Films, and their love of Shin’ya Tsukamoto’s catalogue, I can get fully behind that. But the last few years, All the Anime have really gotten behind the animations of Masaaki Yuasa, and I have to say that I’ve been hit and miss on the films and shows that they have released.

When it comes to the television series, Tatami Galaxy and Ping Pong, I was certainly impressed, although Ping Pong was helped by a strong adaptation bolstering its quirky animation style. But I’ve been more lukewarm over the feature films, especially the sequel to Tatami Galaxy, Night is Short, Walk On Girl. I had a little more fun with Mind Game, and Lu Over the Wall, and the short sections in Pigtails and Other Shorts, and Genius Party, but other than Tatami Galaxy, I haven’t seen anything that makes Yuasa stand out as a singular creative voice to me, nothing that compels me to seek out each and every thing that he has made. I also get the sense that the more popular he gets the more mainstream and tame his works feel. Still, I’m willing to give it another go, although Ride Your Wave may just be the most mainstream Yuasa movie yet. 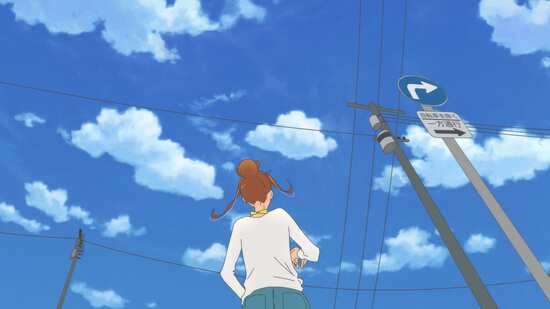 Hinako moved to the coast for her love of surfing, but she finds true love as well. A couple of fire-fighters, Minato and Wasabi watch her surf when they aren’t training, and Minato openly declares that she is his hero. And he’s just as confident in getting to know her, and they soon start dating, with Hinako even teaching him to surf. But when Minato goes surfing without her, tragedy strikes, and Hinako is left heartbroken. Then one day, still haunted by grief, Hinako starts singing ‘their’ song, Minato suddenly appears in the water. From then on, she’s able to summon him whenever she sings... 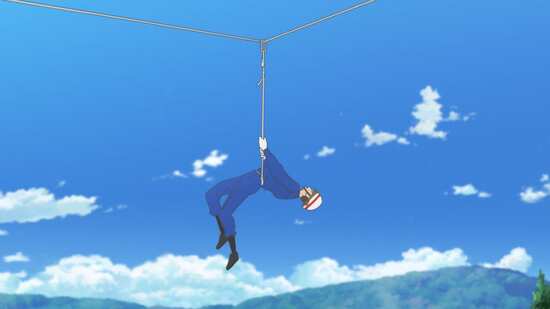 Ride Your Wave gets a 1.78:1 widescreen 1080p transfer with the choice between DTS-HD MA 5.1 Surround English and Japanese, and with translated English, Spanish, and French subtitles (small white font), as well as a Hard of Hearing English subtitle track. The image is clear and sharp, with no signs of visible compression or aliasing, making the most of the bold colours and the very dynamic animation. Yuasa’s signature character art style is apparent here, although the use of light and effects is verging on Makoto Shinkai levels of evocative. About the only issue might be some digital banding in darker scenes. The Japanese audio track I listened to was effective and immersive, the dialogue was clear and the subtitles accurately timed and free of typos. Although that signature song, important to the plot though it may be, is used to the point of tiresomeness. 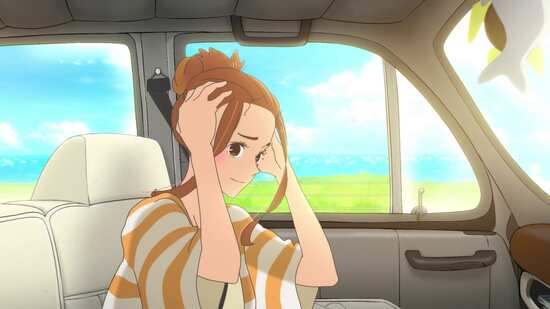 You get one disc in a BD Amaray case, and there is some nice inner sleeve art to look at. The disc (evidently authored by GKids in the US) boots to an animated menu and you’ll find the following extras. 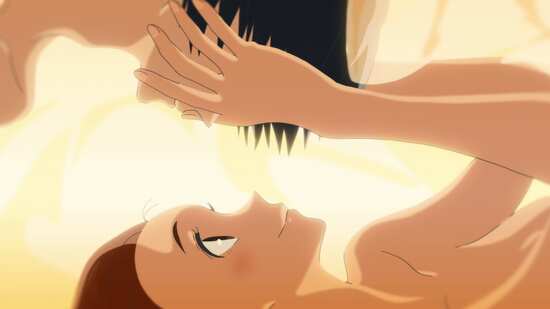 This isn’t the film to convert me into a Masaaki Yuasa acolyte, and I think by this point that ship has sailed. I have to say though that of all the Yuasa feature films I have seen, Ride Your Wave is the most accessible, and indeed the most commercial. It is after all a tragic romance, something that the mainstream masses will certainly appreciate. It also tells a pretty decent story, and eventually it grabbed my attention, and didn’t let go until the sad but uplifting conclusion. I say eventually, because the first act really did fall flat for me, and I just couldn’t get into the movie... not as long as Minato was alive at any rate. 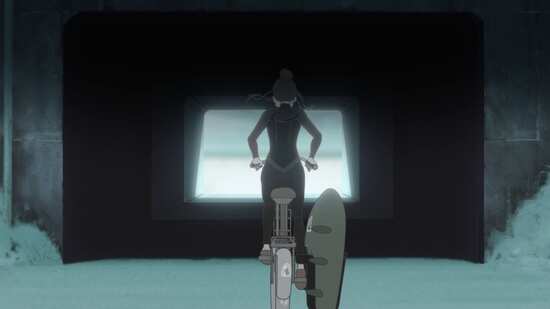 The point of a romance is to get the audience to invest in it, and I just couldn’t do that. Certainly, Hinako is an interesting and well-rounded character, but Minato is introduced with such a sheen of perfection that there isn’t really anything interesting about him at first. He’s so perfect that I was sure that it would be his nervous and shy friend Wasabi who would wind up dating Hinako. But no, he sweeps her off her feet, effortlessly charms her, and goes on to have the kind of idealised falling in love montage that causes nausea through sheer saccharine overload. 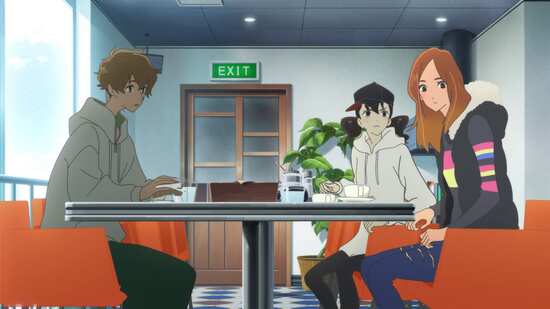 So Ride Your Wave spends its first half hour trying its damndest to put me to sleep. It’s only after Minato dies that the film gets interesting, and indeed the character of Minato gets interesting too. For as Hinako learns more about her late boyfriend, she realises that he was in fact just as flawed and uncertain as everyone else, and she also finds a deeper connection to him that can only exist in a story afflicted with small universe syndrome. 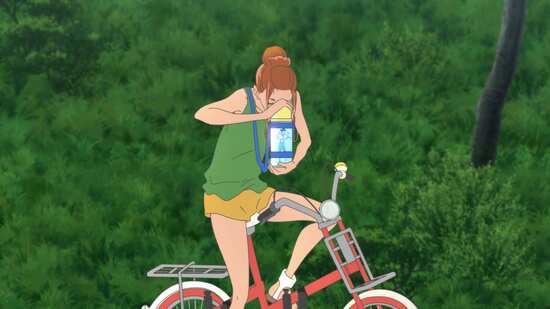 Where the story does shine is as an exploration of grief, and the difficulty of dealing with loss. Hinako shuts down following Minato’s death, even stops surfing and falls out of love with the ocean. It gets to the point where Minato’s sister Yoko, and his friend Wasabi wind up trying to help her deal, even though they suffered the same loss. And of course, when Hinako starts seeing Minato in water everywhere, it’s easy to assume that her grief has set her seeing things. She even tries to pick up the relationship again, keeping a flask of water with her, and ultimately filling an inflatable toy to be able to interact with a life size Minato. You have to forgive the poetic licence at this point, knowing just how much water weighs. 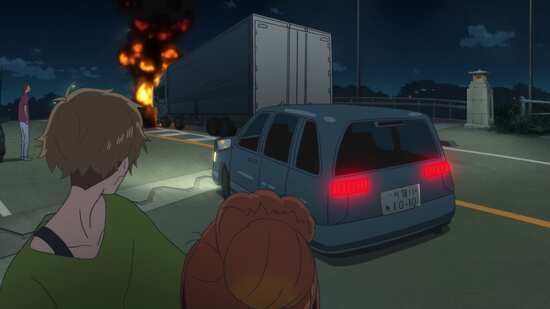 Of course this is no hallucination, and there is magic in the story. Hinako’s grief can only begin once she has been able to say goodbye to Minato, and that is what the journey she goes on is all about. There is a fair bit of Shinkai in the romantic tale, and I did sense elements of Natsuyuki Rendezvous as well, but Ride Your Wave does enough that is original and unique in its own right to make it stand out, not discounting Yuasa’s style either. 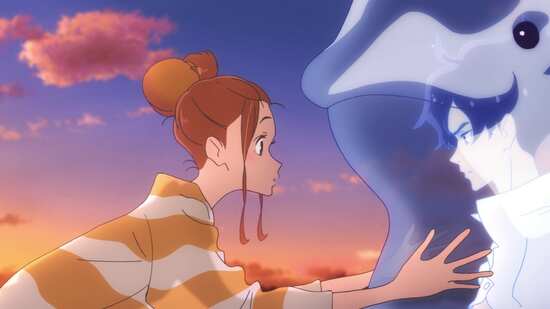 Yet I would appreciate this film a lot more if Minato was actually an interesting character. Instead he comes off as perfect to the point of annoying, and as such, I just found it difficult to invest in the emotional journey of the characters. The film gets fair enough presentation on this Blu-ray with a pertinent set of extras. But I certainly don’t see it as top tier theatrical animation.