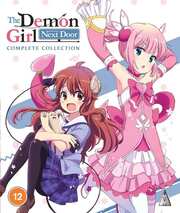 Blu-ray
Is It Wrong To Try To Pick Up Girls In A Dungeon? Complete Season 1 - Collector's Edition
Related Articles

Review for The Demon Girl Next Door Collection

I can appreciate an anime, indeed any form of entertainment that can blindside me, completely defy my expectations. With anime that’s a fair bit easier, as when it comes to check discs, I usually only have the title of the show to go on, and the last few years, it’s more than likely I haven’t had the time to stream the show beforehand. Judging this particular ‘book’ by the cover, I thought the Demon Girl Next Door would be a harem rom-com anime. You know the sort of thing; a lacklustre teenage boy lives a nondescript life, until a girl moves in next door that secretly turns out to be a demon, and it isn’t long before loads of other demon girls come into his life, making it increasingly difficult, and plenty of saucy mishaps ensue. Come to think of it, that sounds like the plot of High School DxD, which to be honest isn’t a show that rings my bell. So you can imagine the relief and pleasant surprise when The Demon Girl Next Door turned out to be nothing of the sort. 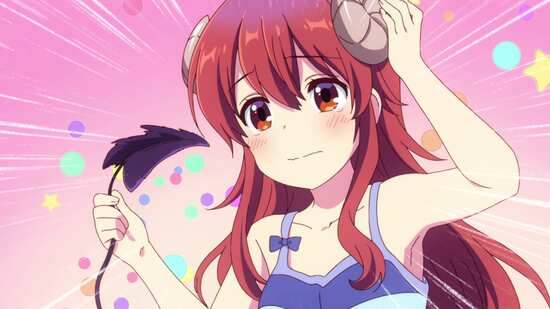 Yuko Yoshido is a pretty normal schoolgirl. She lives with her mother and her little sister, and attends high school. Her family may be poor, and her health has always been frail, but other than that, she’s completely mundane. That’s until the morning she wakes up with a pair of horns growing out of her head, and a demonic tail. 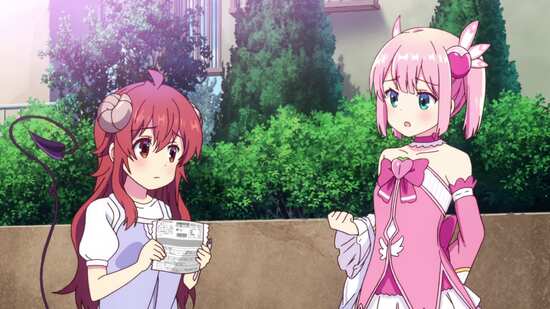 She gets an explanation in her dream from an ancestor named Lilith. She’s the heir to the Dark Clan, but in their endless battles with the Light Clan, they suffered a defeat and had their powers sealed, one of the reasons that Yuko’s family has been cursed with eternal poverty. But now the seal is beginning to break, and Yuko has awakened to her demon heritage. Lilith tells Yuko that all she has to do is to defeat a member of the Light Clan and sacrifice her blood and she will come into her full power. 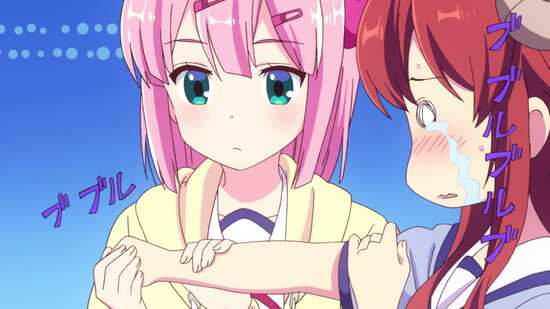 The hard thing will be to find a member of the Light Clan, but luckily for Yuko, a magical girl named Momo Chiyoda goes to Yuko’s school. But Momo is insanely powerful, and has a lot of experience defending humanity. Yuko’s just a weak, frail girl with horns and a tail. So when she challenges Momo to a duel to the death, Momo can only take pity on her. It’s the start of a strange friendship... 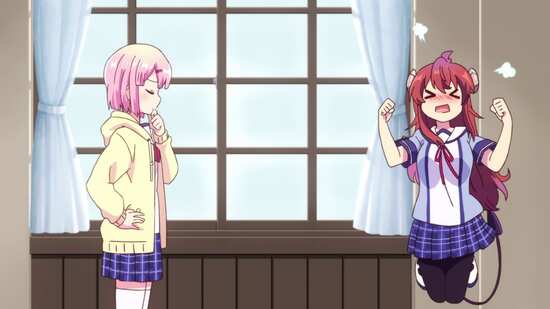 12 episodes of The Demon Girl Next Door are presented across two discs from MVM.

1. Yuko Awakens!! For Family Reasons You’re Now a Demon Girl
2. Just How Sporty Are You?! Everything is Fluctuating
3. Nightmare of Forebear?! The Doorstep of Darkness Descends
4. Sharpen Your Mind!! The Newly Awakened Powers of the Magical Girl
5. A Town Full of Traps?? The Demon on the Brink Awakens a New Ability
6. Courage to Face the Future!! The Heavy Roller Won’t Stop
7. The Pink Method!! The Wheel of Fate is a Round Tire!!
8. The Cursed Fruit!! Beware the Sour Mikan!!
9. Final Exams!! Today I’m One of Those Brainy Demons!!

Disc 2
10. The Ancestor Evolves!! A Pair of Glasses Reflect Within a Dark Lab
11. Diving Into Dreams Once Again!! Break Through The Pink Defence Line
12. Feelings to Convey!! A New Leap Forward For Demonkind!! 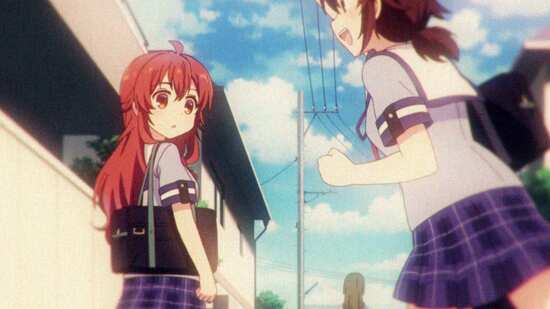 The Demon Girl Next Door gets a 1.78:1 widescreen 1080p transfer on these discs. The image is clear and sharp, colours are rich and consistent, and there are no visible problems with compression, aliasing, or even banding. It’s a nice comedy anime, which means bright colours, and unchallenging world designs, while the characters are cute and memorable, with some nicely accomplished costume designs. The animation is smooth, and does more than enough to tell the story and express the show’s sense of humour. It might not be the most visually complex of anime, but it is put together really well for what it is. 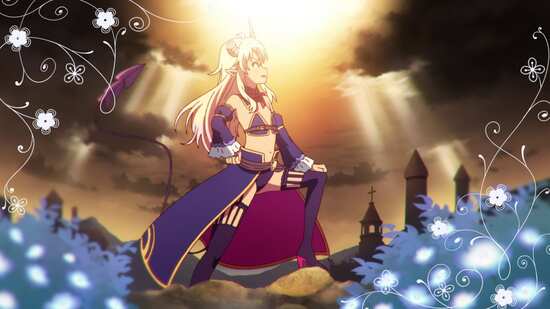 You have the choice between DTS-HD MA 2.0 Stereo English and Japanese, with subtitles and signs locked during playback. I was happy enough with the original language track, the actors were suited to their roles, and made them distinctive, while the subtitles were timed accurately and free of typos; except one in episode 6 where ‘detectable’ was written as ‘delectable’. The music is quite nice, and I grew fond of the opening theme. The stereo did enough to get the show’s action and effects across well. 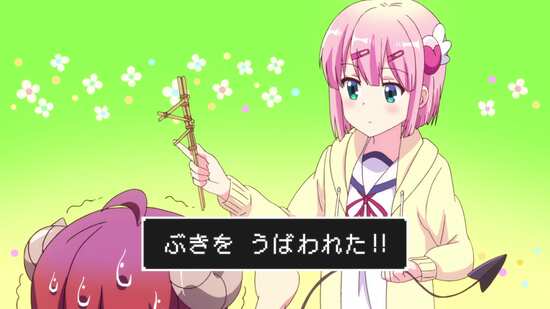 You get two discs which boot to static menus. The episodes are followed by translated English credits.

The extras on disc 2 comprise the textless credits, and trailers for Mysteria Friends, Revue Starlight, Release the Spyce, and Beyond the Boundary. 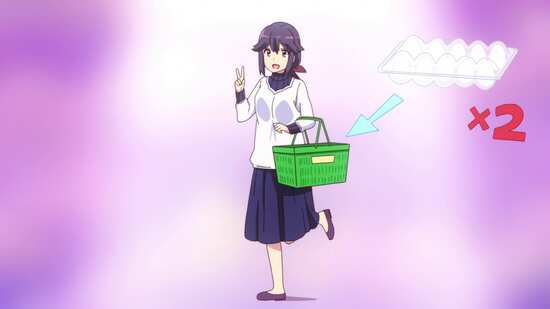 The substantial extra here is the collection of The Demon Girl Next Door Minis, 36 short animations that run to 20:44 in total, but were more like promos than added content. 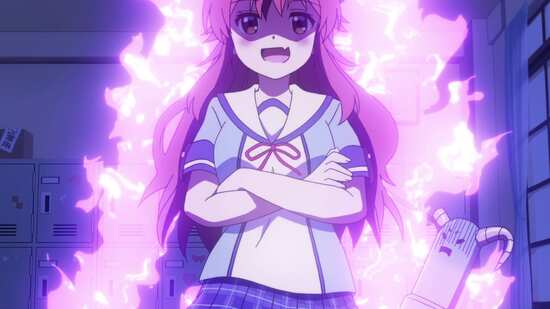 The Demon Girl Next Door certainly had an initial positive effect on me, and managed to maintain that goodwill through most of its twelve episodes, offering more than enough in the way of entertaining, good natured comedy to justify its existence. But in the end, it never really transcended its premise and its genre, happy to stick with ‘good enough’ and never exceeding that. And in the end, like so many short run shows, it took its eye off the ball in the hope of scoring a second season, in the process most likely precluding that from ever happening, although given the calibre of shows that get second seasons these days, I could be totally wrong there. 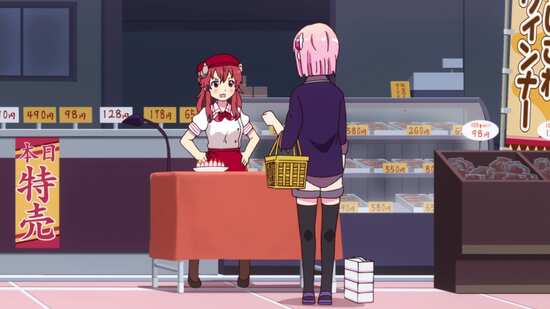 Normal schoolgirl Yuko goes to sleep one night, has a weird dream, and wakes up the next day as a demon girl, with the horns and tail to prove it. She’s not much stronger though, and has only a smidge of magical ability, but she’s promised that she will break the seal and come into her true power if she can find, defeat, and obtain the blood of a magical girl. It turns out that the first part won’t be too hard as there is a magical girl named Momo at school, although defeating her is practically impossible, given her insane strength and magical power. Yuko’s frail and lacks stamina to begin with, so it quickly becomes clear that she has no chance against Momo. Not that conflict is the point really, as the two quickly become slightly antagonistic friends. Momo takes pity on Yuko, and decides to help her train up and become stronger, and every time Yuko fails to make any inroads against Momo, she defiantly states that she’ll get her next time. 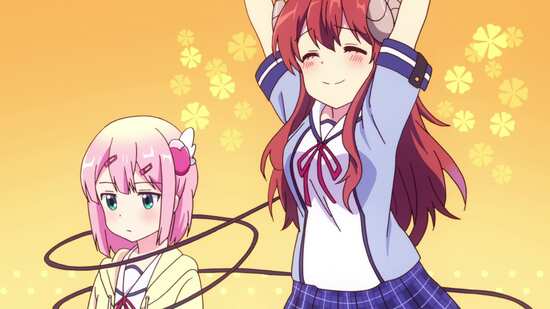 With Yuko a bubbly, outgoing and friendly girl who has suddenly come into these minuscule powers, and expected to be all demonic, confronted with Momo the magical girl, who has been so for most of her life, and has become somewhat introverted, soft spoken, and off-beat as a result, you get this wonderful clash of personalities that really livens the show up. At the start it was reminiscent of the character dynamic in Kill Me Baby, but although the two shows do share a short form manga origin, The Demon Girl Next Door somewhat neuters that character clash with an ongoing storyline, and indeed character development. 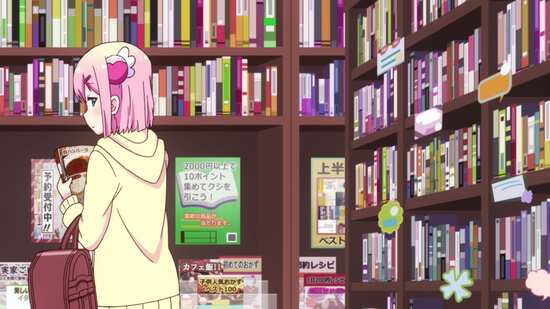 Yuko has a somewhat sarcastic friend named Anri at school who oddly takes her friend’s transformation in stride. There’s also a girl named Sion who performs some odd experiments. Yuko lives with her mother and her little sister, who apparently knew about their family’s demon heritage before Yuko did. They are comically poor, although breaking the seal ought to break the poverty curse. Little sister Ryoko wants to learn tactics, and become a general to support her sister taking over the world, something Yuko has never really considered. There is also the spirit of their demonic ancestor Lilith, living in a small statue after awakening Yuko in that dream, and trying to mastermind her battles for her. 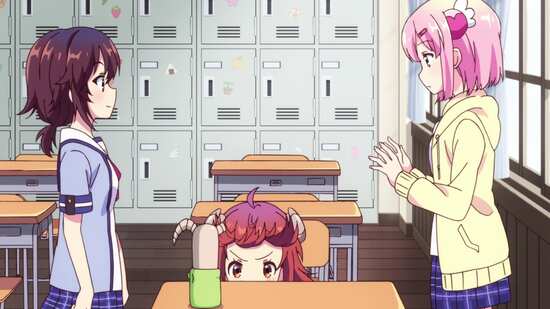 Surprisingly late into the show given her prominent presence in the opening credits, another magical girl named Mikan shows up to help Momo, although given that she infects other people with bad luck whenever she gets stressed, she’s less help than she wants to be. And there’s Momo’s cat Metako, a traditional talking mascot animal in the magical girl sense, only Metako is so old now he can only say one thing, and then at the most random and inappropriate times. 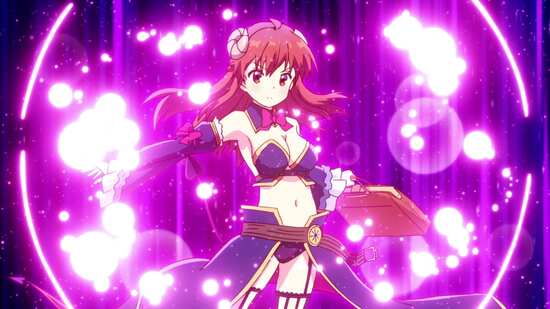 It’s a nice collection of characters, and they get up to some rather silly and entertaining antics, although the show never gets as surreal as it could get, given the premise and the characters. It’s still a good deal of fun, and very entertaining. But then the end of the series comes, and like so many promising comedy anime shows, The Demon Girl Next Door finds a place to get a little more serious with its storyline, and begins to hint at something tragic regarding Momo’s sister in law, and Yuko’s father; that overarching storyline making itself felt. The humour gets dialled back, the random nature of the comedy is relegated, and the change in the show is so palpable that the final episode feels like a desperate plea for a second season. It’s not the best note to end a season on, but overall, The Demon Girl Next Door is a solid comedy anime show. It’s well worth seeking out.