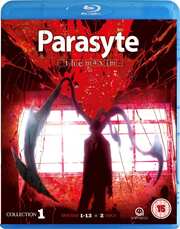 Review for Parasyte The Maxim Collection 1

My OCD got triggered again. I got around to re-watching Parasyte the Maxim, and discovered that when Manga sent me the check discs, they sent Part 1 on DVD and Part 2 on Blu-ray. That’s the kind of thing that spurs me onto an online retail site to get everything evened up. And no, I didn’t get Part 2 on DVD. Anyway, here’s a quick cut and paste of the Part 1 review, all Blu-ray-ed up. 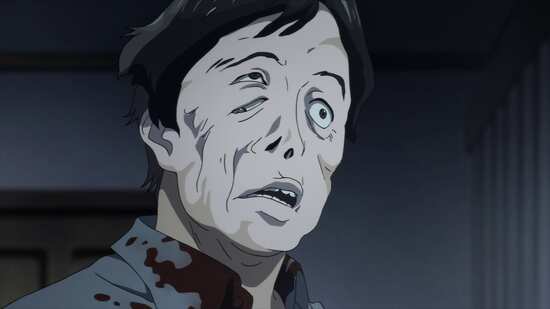 The question is posed, what would happen if the human population was reduced? We’re a species that over-populate the planet to the point that we use resources far quicker than they can be replenished, and we despoil the environment, effectively burning down the house while we’re still in it, with no other house to go to. Would reducing the human race cut down on pollution, save endangered species, restore the environment? It seems that someone or something has an answer, to put something else at the top of the food chain. The parasite that appears in the world is a particularly insidious predator, a bug that enters through the ear and invades the host’s brain, subsuming the personality and transforming the host body, using that body to feed... on humans. 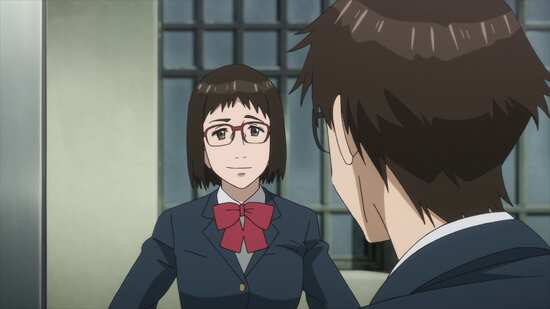 Only something goes wrong when a parasite tries to take over student Shinichi Izumi, as he happens to be wearing headphones at the time, and the best that it can manage is invading Shinichi’s hand. Shinichi wakes to find that his hand is no longer his own, and it’s doing some really weird stuff. Groping girls boobs against his will is one thing, but stretching beyond comprehension , growing eyes, reading, watching TV, and eventually speaking is a little too much to handle. These parasites are here to devour humans, but it turns out that Migi, as he names his new hand, gets enough sustenance from Shinichi’s blood, and then having to coexist, they form more a symbiotic relationship than a parasitic one. Shinichi’s worldview begins to alter, while Migi gets a crash course in humanity, and turns out to be even smarter than his host. They’ll have to learn to work together, as the other parasites are smart too, and they quickly learn to move beyond serial killing and cannibalism to infiltration and global conquest. Shinichi and Migi might be the only two that can save the world. 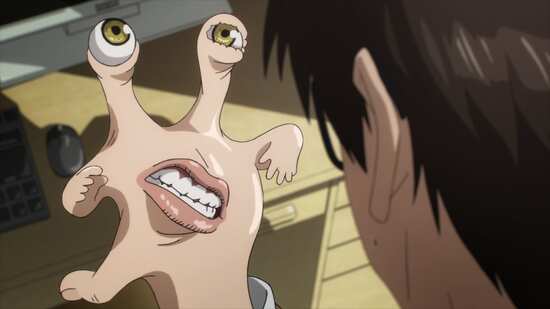 Disc 1
1. The Metamorphosis
2. The Devil in the Flesh
3. Symposium
4. Tangled Hair
5. The Stranger
6. The Sun Also Rises
7. A Dark Night’s Passing
8. Freezing Point
9. Beyond Good and Evil 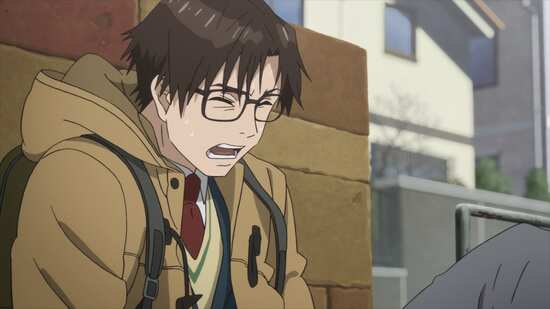 Parasyte the Maxim gets a 1.78:1 widescreen 1080p transfer on these discs. The image is clear throughout, with no significant signs of compression, and only the lightest of digital banding. Studio Madhouse do the honours with the animation, and offer more realistic character designs, strikingly detailed world designs, and strong, fluid animation. The anime also allows for far greater imagination and sheer grotesque imagery when it comes to the body horror the parasites inflict. In that respect, this anime is at a wholly different level than the live action feature. Some of that might be down to the budget constraints of accomplishing such effects in live action, that the anime is less limited by, but some of it surely is that added layer of abstraction that the 2D animated medium allows for, a greater suspension of disbelief, resulting in stunning scenes in the anime, that would look patently daft in live action. Sure enough for a recent animation, Parasyte looks stunning on Blu-ray. Sentai’s DVDs give good results, splitting the episodes across three discs, but even still the added resolution of Blu-ray brings out detail, colour and clarity that they just can’t compete with. 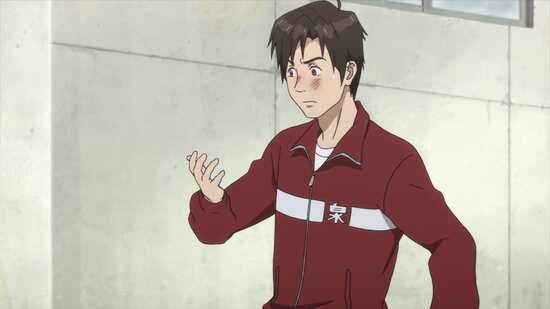 You have three options from the main menu of each disc, DTS-HD MA 5.1 Surround English with a signs only track, DTS-HD MA 5.1 Surround English with HOH English subs, and DTS-HD MA 2.0 Stereo Japanese with a translated English subtitle track. As you can guess from that sentence, even the audio and subtitles on these discs is locked during playback. I went with the Japanese, and was very happy with the experience, the actors suited their roles, and the subtitles were accurately timed and free of typos. The action comes across well, and I love the music (except the autotune hell of the opening theme). The incidental music can slip into 80s electronica at times, a hint of Vangelis and Jean Michel Jarre that really strikes a chord with me, and isn’t often heard in anime. I gave the dub a try, and while I remain unconvinced by the English dub performances, I must say that the surround audio really does open up the action a lot more. 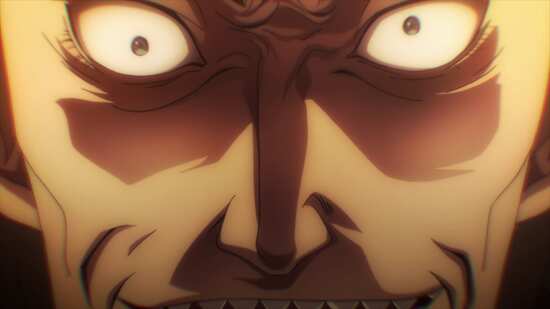 Disc 1 autoplays with a trailer for Akame ga Kill.

Disc 2 has the textless credits, and further Sentai trailers for Akame ga Kill, Vampire Hunter D, Brynhildr in the Darkness, and Black Bullet. 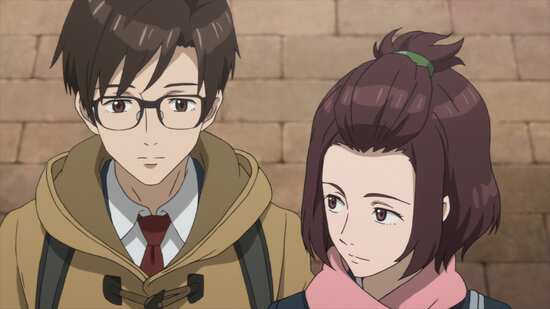 One of the advantages of adapting a 20-year old manga to the screen is that the story is complete before you even begin; you don’t have to worry about filler and padding, and what you get with the show should be the pure, unadulterated story, albeit tweaked to better suit the television or movie format. The downside is that with the story established, there’s more of a likelihood that then having watched one adaptation, movie or anime, the other will feel redundant. This time, I hadn’t seen the live action movies recently, so I had none of that feeling of tedium revisiting common elements of the story, especially during the first third of the series as last time. Regardless, the anime really does come into its own, establishes its own style and pace, and offers a complimentary experience to the film. Either one by itself, anime or movie is worth watching; the two together is just a treat. 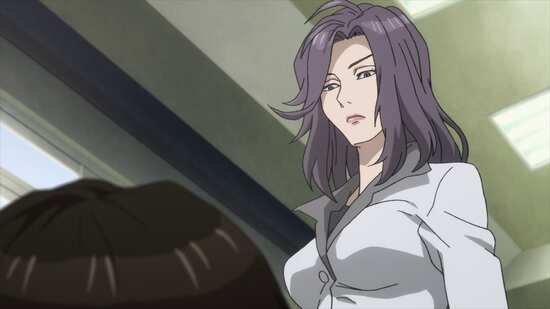 The movies have a consistent dark tone to them, compress and combine events, cut down on extraneous characters, have a strong, but stripped down narrative and an obvious eco-message at their heart. The story works really well as a couple of feature films, but it’s only when you watch the anime that you realise just how much has been stripped down. The anime takes the time to tell its story, really develop the characters (Shinichi has more of a growth arc in the anime), and explore this weird world that is unfolding. 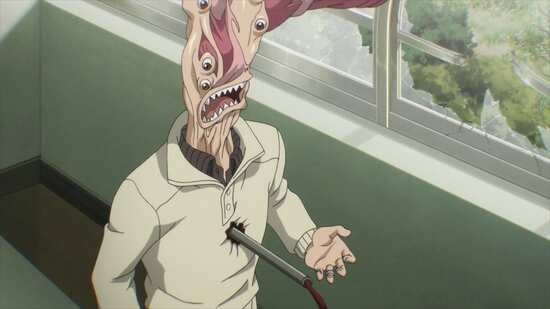 You do see many of the same events in the anime, but they are spaced further apart, quite obviously feeling like separate chapters in a story, often quite disconnected. This is one area in which the movies feel stronger, as there’s a greater degree of interlinking in the plot lines, and the stronger character arcs flow through the film. In contrast, the character of Ryoko Tamiya only has a brief prominence in the anime, while the Parasytes only start dabbling in politics close to the end of this collection. But the anime really does explore and expand this world, we get to know far more of the characters, Shinichi’s school is certainly expanded beyond just him and Satomi in terms of regular cast members. 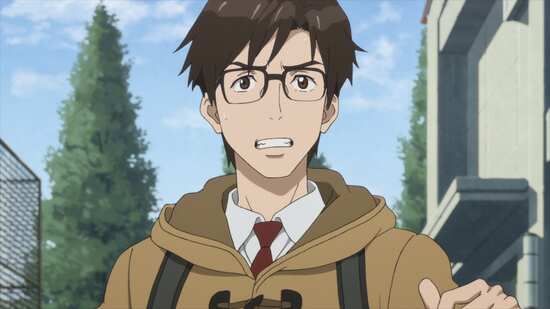 The broad strokes of the anime unfold in the same way, parasites appearing to take over human hosts, using them to feed on other humans. Shinichi Izumi escapes this fate when a parasite only gets as far as his hand, and they wind up forming a symbiotic relationship. The story follows Shinichi as he comes to terms with this new reality, his right hand now sentient and independent, as well as capable of changing form. He has to hide his condition from the world, keep the presence of the parasites secret as well, lest there be mass panic. He has to do this while trying to deal with the parasites, fighting them, or in the case of a few such as Ryoko Tamiya, trying to come to terms with them. His happy home life is disrupted by this, but he tries to make the best of things, keeping it secret from his parents. The changing point in the series is the loss of his mother, an event that has a radical effect on his personality, but how much of that is down to trauma, and how much down to coexisting with the pragmatic and ruthless Migi is unclear at this point. Certainly where in the film, the relationship between Shinichi and Migi was a two way street, both rubbing off on each other, here it’s more of a one way thing, with Migi’s cold-blooded pragmatism affecting Shinichi, but Migi not at all sympathetic. 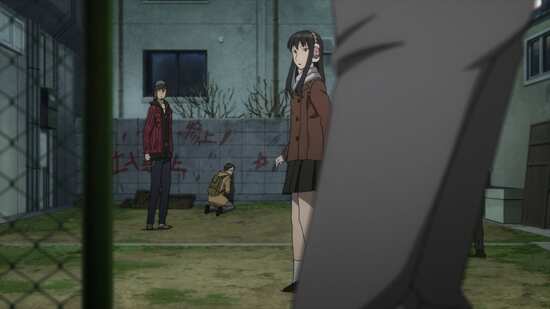 While many of the same events do occur, they don’t happen in exactly the same way, a legacy of the anime’s more episodic approach, where characters and storylines are less interlinked. It’s the differences that make the anime interesting. Two major differences include the character of Mamoru Uda, who like Shinichi has formed a symbiotic relationship with his parasite. Then there is Kana, another girl at school who takes an interest in Shinichi when she learns that she can sense his presence. She thinks he must be her soulmate, which makes for an interesting triangle with Satomi. The truth is that she’s one of those rare humans that can sense parasites, and that’s what she’s sensing in Shinichi, which inevitably causes a whole heap of trouble for her. 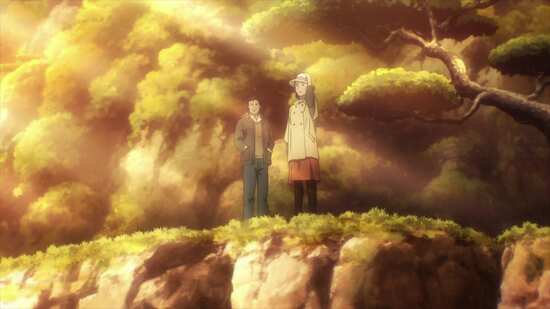 Parasyte the Maxim is another solid pick-up from Animatsu. It’s a great story, with impressive animation from Studio Madhouse, and I love the music too. It might not have the cohesive narrative and strength of the feature films, the episodic nature of the anime story no doubt a legacy of the manga, but it develops the world and the characters in a way that the movies just could not. This is one anime that’s well worth picking up, and it looks even better in high definition, and it’s even more watchable and fulfilling the second time around.