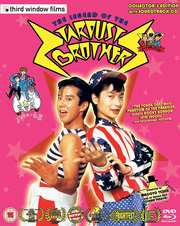 The Legend Of The Stardust Brothers (Blu-ray Details) 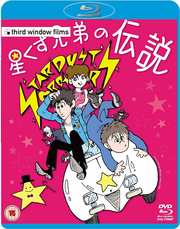 Review for The Legend Of The Stardust Brothers

Coincidence might just have stood me in good stead as I go into this review for The Legend of the Stardust Brothers. I have recently been re-watching Bubblegum Crisis, a classic cyberpunk anime that leans heavily on its pop-rock soundtrack. It’s so good that the Blu-ray’s main menu screen is actually a 35 minute loop of music videos. Third Window Films are going one better with the 1985 cult classic The Legend of the Stardust Brothers, as they include a CD soundtrack with the Blu-ray. The 1980s is where my musical self is most happy. 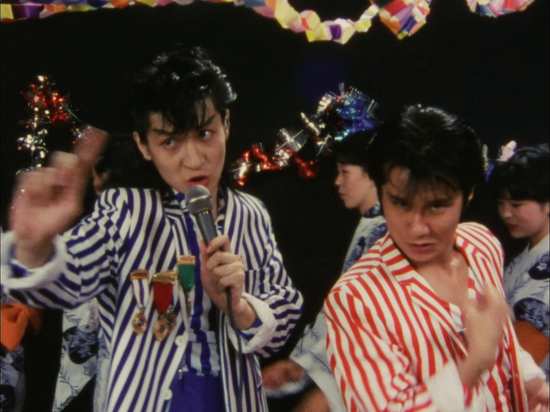 The Legend of the Stardust Brothers is also notable for its director, Macoto Tezuka. He is the son of the legendary mangaka Osamu Tezuka, and this film was his breakthrough feature. Inspired by films like The Rocky Horror Picture Show, and based on a ‘fake’ soundtrack CD from producer Haruo Chikada (he made a soundtrack to a movie that didn’t exist) he created a rock musical. Given the premise and the relatively low budget execution, it’s no surprise that The Legend of the Stardust Brothers didn’t fare well at the Japanese box office in 1985. But as befitting its inspiration, it’s become something of a cult favourite over the years. Third Window Films have ‘rediscovered’ this cult classic and are bringing it to Blu-ray, and Macoto Tezuka has taken the opportunity to create a director’s cut for this release. I’ve been looking forward to this film. 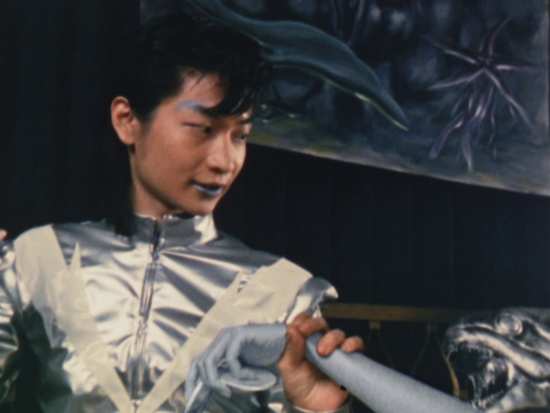 The Stardust Brothers are washed up, appearing at a nightclub so dreary that it’s in black and white. Their colourful act isn’t a hit with the monochrome guests, and their tale of woe falls on deaf ears. That doesn’t stop singers Shingo and Kan telling the story anyway. Things were so different two years previously. Shingo was lead singer of a new romantic group called the Super Cars, and Kan was his arch rival singing for London Boots. But then producer Minami of Atomic Promotion scouted them, and put them together as The Stardust Brothers, and launched them on a stratospheric career ride. But it wasn’t plain sailing, and with a rocket climb to the top came an equally fast crash dive to obscurity... 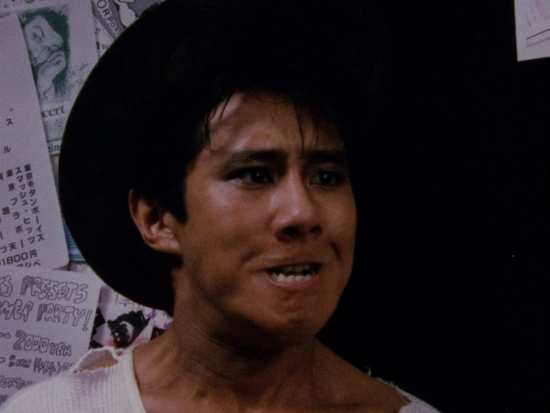 A low budget, cult movie from 1985, set your expectations low, and you won’t be disappointed by a 1.33:1 pillarboxed 1080p transfer with what I assume is DTS-HD MA 2.0 mono Japanese. Certainly it was a very front focussed and central audio presentation. I suspect the source is 16mm, what with the softness in the image and the less than vibrant colours. There are also signs of age on the print, little flecks and scratches here and there. The dialogue is mostly clear, but suffers from hiss, and the location conditions where it was recorded. Oddly enough the hiss vanishes for the songs, of which there are plenty in this film. The production values are a little inconsistent, with some rock performances with conspicuously tiny crowds trying to look bigger than they are, but the fashions are pure eighties, while some of the set design so lavish that it wants to look widescreen. There’s also some animation during a bit of pop-star, drug fuelled eighties excess. 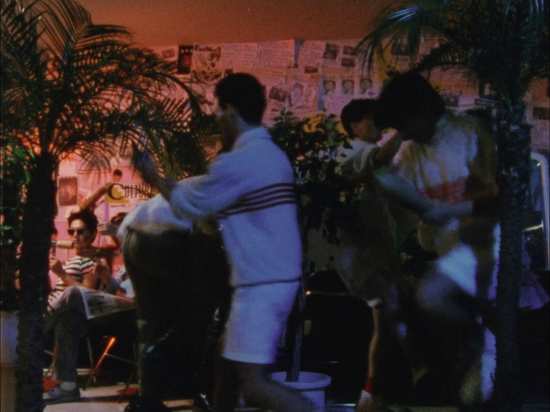 The disc offers English and German animated menus when you insert it into your player.

On the disc, you’ll find a trailer for the film lasting 2:26.

The Interview with director Macoto Tezuka lasts 25:06, and is a Q&A recorded especially for this release; a retrospective look at the film. 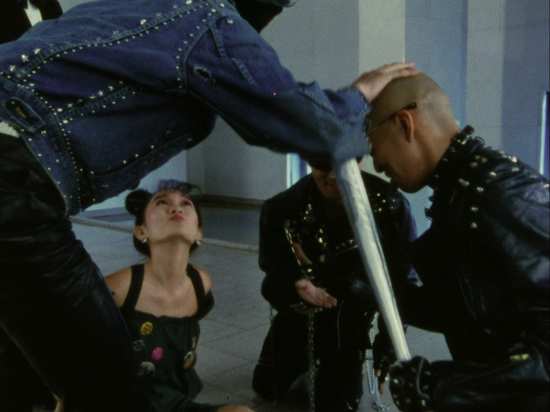 The Making of Stardust Brothers on the other hand is a 44:54 TV documentary recorded when the film was made. This has a more up-scaled videotape look to it.

As mentioned, this release also comes with the soundtrack CD, limited to 1000 units. There are 17 tracks on the disc, with a total run time of 62:24, and you’ll hear all of the songs from the film in full, and with the same audio quality, which explains why the music in the film doesn’t have the hiss that the dialogue scenes does. I only got the check discs, but I've been informed that the CD comes in the Amaray case with the BD and DVD discs, and alas, there is no track listing. 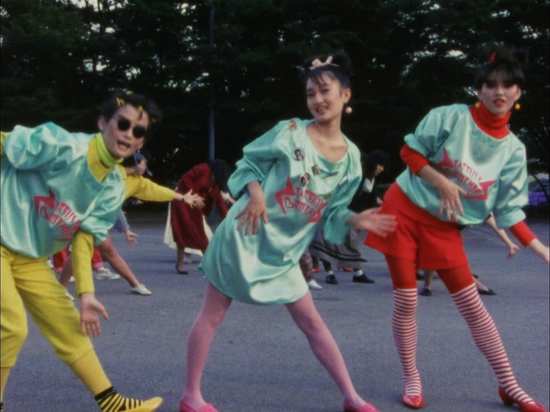 It took a while for Legend of the Stardust Brothers to grow on me. You have to compensate for the variable production values, make allowances for a couple of first time actors in the title roles, and a story that pretty much wears its influences on its sleeve, and always takes a left turn instead of opting for the easy road. In some ways it’s a typical roller-coaster tale of pop music stardom, success and excess, but the story keeps finding nuance and allegory that helps it break out of its era and its genre. 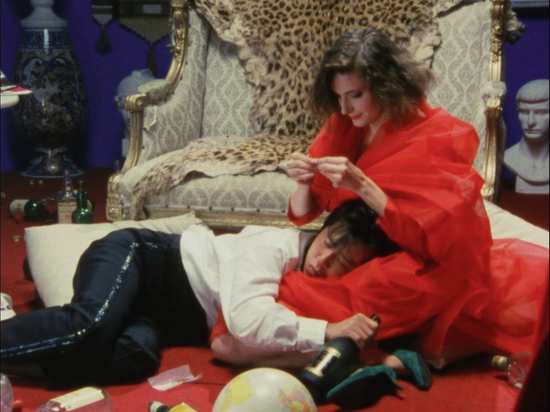 It is very much an early eighties pop music showcase when it comes to the music and the fashions. Tezuka states in the interview that one of the biggest problems the film faced was the pace of cultural evolution in the eighties, that by the time Stardust Brothers was released, it was already three years behind the times. That’s less of an issue in 2020, where the nineteen-eighties seem like a homogenous totality. 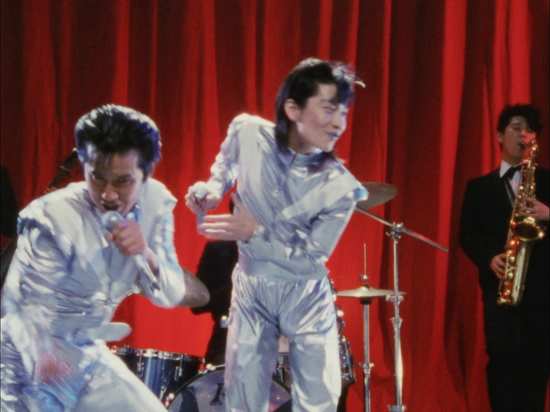 You have Shingo and Kan, rival lead singers of two rival bands, both scouted by the creepiest agency that you can imagine, all 1984 in terms of Big Brother control and futuristic minimalism. They have a couple of bald thugs in the main corridor keeping out the riff-raff, and a cyberpunk Svengali doles out contracts with a laser beam. He puts the two together to create the Stardust Brothers, and grudgingly allows a wannabe singer named Marimo to be the head of their fan club. Marimo could never get past the thugs in the lobby, but both Shingo and Kan take a shine to her. 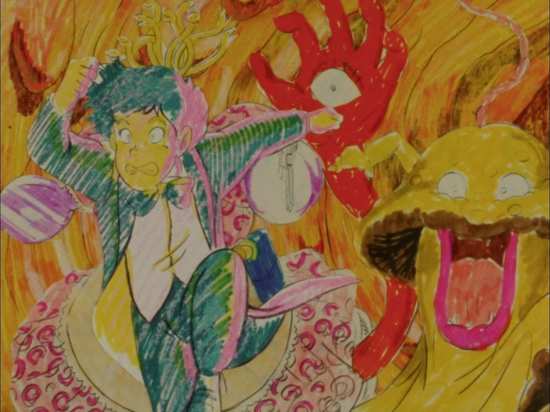 Their rapid rise to stardom commences, a reflection of manufactured pop, and manufactured pop stars, orchestrated careers and micro-managed PR. Naturally potential love triangles don’t work out, and Shingo is the first to fall from grace, descending to the depths of drug fuelled depravity that most pop star biopics make space for. 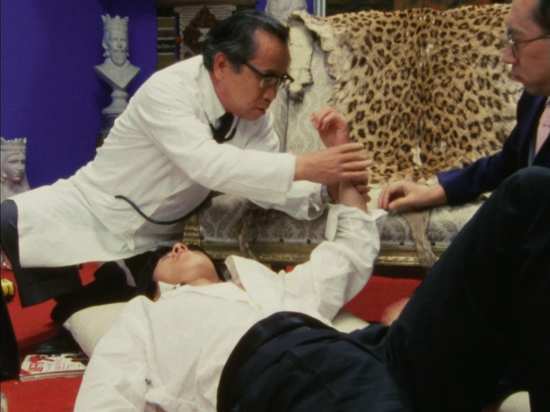 It’s here that Stardust Brothers takes a really twisted and impressive turn. The politicians get involved. It isn’t a new idea that entertainment is the opiate of the masses, a tool to keep society in check and not asking too many questions. To this point, the government has been passively benefitting from the Stardust Brothers notoriety, but now that creative differences are causing tensions in the group, they want more direct control. So much control that they introduce their own manufactured star, Kaoru, a David Bowie lookalike who also happens to be the son of a powerful politician. 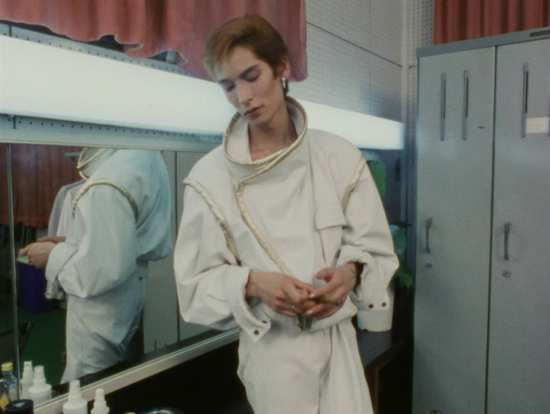 With the Stardust Brothers now down and out, things take a turn for the really bizarre, culminating in a car chase that is out of this world, half James Bond and half Star Trek; you won’t believe who Kaoru’s dad turns out to be, and the ending gets a little Blazing Saddles in tone and mayhem. 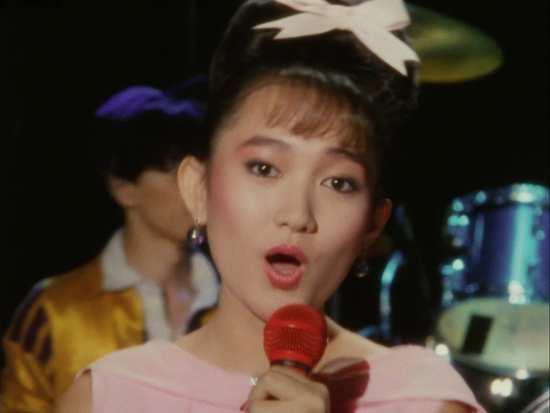 I was looking forward to watching this film, but I have to admit that my first impressions deflated my enthusiasm before I got into the story and the characters. The surreal tone of the film takes a while to work its magic, and I must also say, having listened to the soundtrack CD out of context, that the music works best in the film. I’m sure that opinion will change if I become a member of the cult of Stardust Brothers. The influences cited include Rocky Horror and Phantom of the Paradise. There’s a hint of the Beatles movies and even more so the Monkees, and I did mention Blazing Saddles. But most of all, I got a Buckaroo Banzai vibe from the film. The Legend of the Stardust Brothers is well worth watching just to see which synapses are triggered for you. It’s definitely an enjoyable experience.