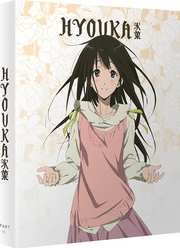 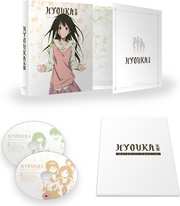 One day I’ll stop whinging about gaps between part releases. Not today though. I reviewed Part 1 of Hyouka back in December 2017. I loved it; it was a great show that apparently ticked all the right boxes for me. I say apparently as it is now June, and the second half of the series shows up for review. I put the discs in, watch the first two episodes, and I’m left cold. I can’t for the life of me recall what it was that so attracted me to this show in the first place. Fortunately, a couple of episodes later I’m back into the groove with Hyouka, to the point where I re-watch the first two episodes in this collection again, this time with the right frame of mind, but that six month gap makes me appreciate why some fans wait until they own the whole series before starting to watch it.

All that Hotaro Oreki wanted was a grey school life. Other people may want rosy existences, to make memories, to excel, to fall in love, but Hotaro just wants it grey, as easy a life as possible, maximum return for minimum effort. Of course that means avoiding the extra-curricular activities offered by the after school clubs. Then he gets a letter from his sister. She’s heard that the Classic Literature Club is due to close, because of a lack of members. She has fond memories of the club, and wants it to stay open, and if Hotaro will sign up as the only member, he won’t even have to turn up. Not debating his sister is the path of least resistance, but Hotaro wasn’t expecting there to be another member of the Classic Lit Club. 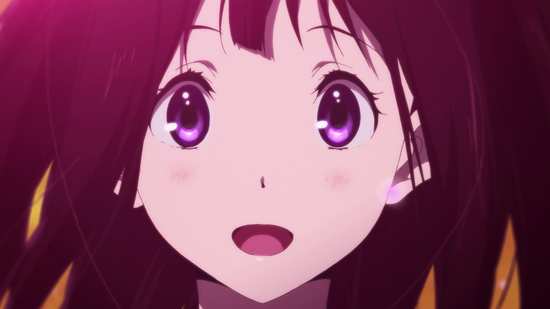 A girl named Eru Chitanda is also a member, and now that there are two members, the Classic Lit Club will actually have to show something for its existence. It also turns out that while Hotaro has a pandering for the easy life, for some strange reason, he has a hard time refusing Eru’s requests. Eru likes solving mysteries, and there are more than a few in Kamiyama High School. She also has a personal mystery involving the Classic Lit Club that needs resolving. The thing about wanting an easy life, looking for the easy way out, is that Hotaro’s actually got a talent for finding logical solutions to mysteries...

As this second collection begins, the all-important Kanyasai Culture Festival is upon them, and Hotaro, Eru, Mayaka and Satoshi have another mystery to resolve, one which threatens the whole festival. The concluding episodes of Hyouka are presented across two Blu-rays from All the Anime. 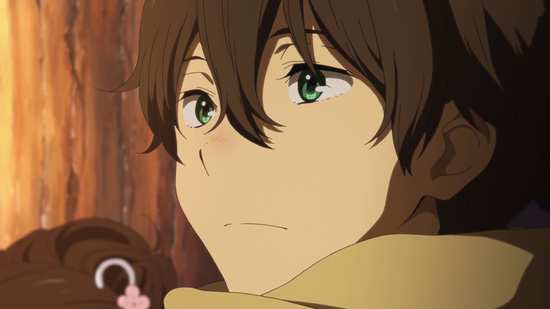 Disc 2
21. The Case of the Homemade Chocolate
22. The Doll That Took the Long Way Around

Hyouka gets an impeccable 1.78:1 widescreen 1080p transfer. The image is clear and sharp, colours are strong and consistent, there is no visible compression or banding, and the animation is smooth throughout. That’s a very good thing given that this is a KyoAni production, and the animation is where they really excel. The character designs are appealing, the world design is detailed, and they apply their usual tricks to make Hyouka look alive, warm and as real as an animation can look. Having said all that, Hyouka is still one of the best KyoAni shows that I have seen in terms of animation. This is one series where you’ll want to watch it twice, once for the story, once to just revel in how the characters move, even the background characters. 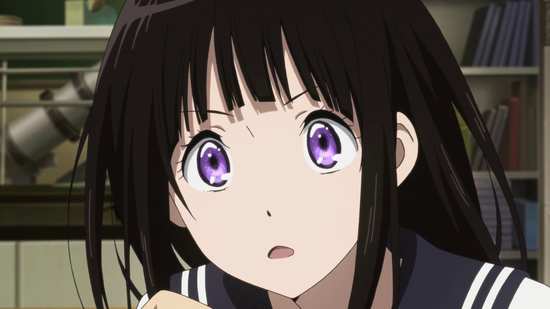 This is one of those shows that get a whole load of stipulations attached to them pre-release. That means we only get stereo audio, Dolby TrueHD 2.0 English and Japanese, with subtitles and signs locked during playback. There’s no 5.1 Funimation upmix, but on the bright side, we’re spared their commentaries as well. I was more than happy with the Japanese audio, the cast really suited to their roles, the stereo placement giving the show some space, and a theatrical quality music score really driving the emotion of the piece well. I gave the dub a quick try and was impressed at a quality effort from Funimation. I may have to give it a try the next time I watch the show. The subtitles are accurately timed and are free of typos.

Disc 2 autoplays a trailer for The Disappearance of Haruhi Suzumiya. 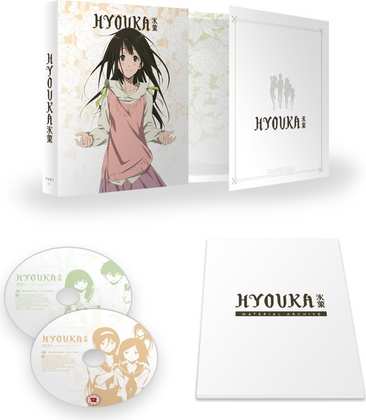 You get the textless credits here, albeit textless with player locked subtitles plastered over the image. There are also Funimation trailers for Gosick Part 2 (seriously deserves a UK release), Danganronpa 3, Dance With Devils, and Steins;Gate The Movie – Load Region of Déjà Vu.

I haven’t seen the packaging or the 80-page booklet that comes with the Collector’s Edition to comment.

I remembered that Hyouka was a show about mysteries, and about a high school detective using deductive reasoning to solve those mysteries, but what I had completely forgotten was that Hyouka was about the trivial mysteries that crop up in a high school setting. These are the petty conundrums, the minor enigmas, the paltry puzzles that never cross the desk of a dedicated criminologist, but might just invoke the insatiable curiosity of a high school girl with a little free time on her hands. Just who is behind the petty thefts during a school culture festival, why did a middle school teacher confess to liking helicopters, just what’s behind a school tannoy announcement, how to get out of a locked shed without the implication of impropriety, who stole some Valentine’s chocolates, and who would re-route a parade at the last minute? 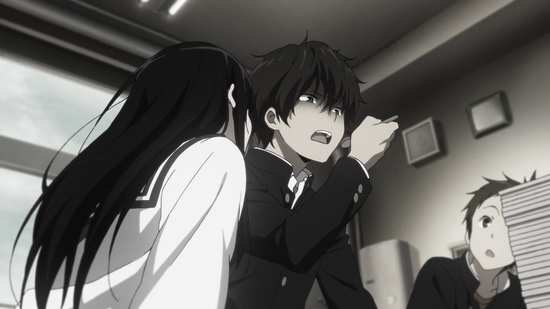 You might be forgiven for thinking that such triviality might be a little dull, and indeed for the first couple of episodes, I wasn’t expecting the mundanity of it all. It took me that long to recall what Hyouka is all about, the fact that it’s actually a slice of life show, albeit one with a purpose beyond the usual simple pleasantness that the genre offers. The mystery element gives the show a narrative direction, and allows for character growth and development while maintaining that sheer joy of being in the company of these likeable characters.

Hotaro was the reluctant recruit to the school’s Classical Lit Club as a favour to his older sister, who actually wound up having to put some effort in when it turned out there was actually another member, Eru Chitanda. They were soon joined by Hotaro’s friend Satoshi, and school librarian Mayaka, and the first major mystery they had to solve was that of the classical literature club itself, the Hyouka magazine that it produced, and how Eru’s uncle was involved. 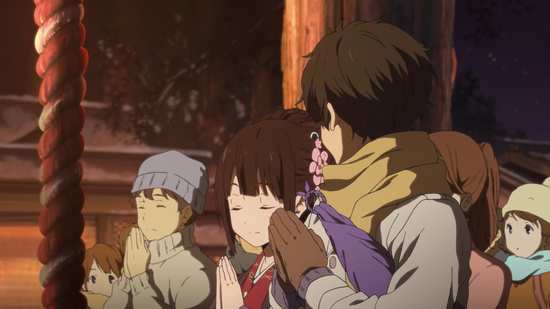 At the start of this collection of episodes, they’ve published this year’s edition of Hyouka, but due to a degree of miscommunication, have wound up with 200 copies instead of just 30, 200 copies that they actually have to sell during the school culture festival. With Hotaro pursuing his low energy enthusiasm approach, and with Mayaka tied down with the Manga club, it falls to Eru and Satoshi to do what they can to advertise their wares. When the petty thefts start occurring during the festival, that becomes an opportunity that they can exploit, using Hotaro’s sleuthing notoriety to get the word out.

That’s the last substantial mystery arc in the series, running to some six episodes in length. The rest of the episodes are single story affairs, catching up with the Classic Lit club over winter and spring. Episodes 18 and 19 are really just thought experiments for the characters, as Eru and Hotaro discuss a couple of mysteries, but things get more immediate in Mis-Happy New Year when Eru and Hotaro wind up locked in a shed together at a local shrine, and Eru’s social standing means that simply shouting for help is a last resort. 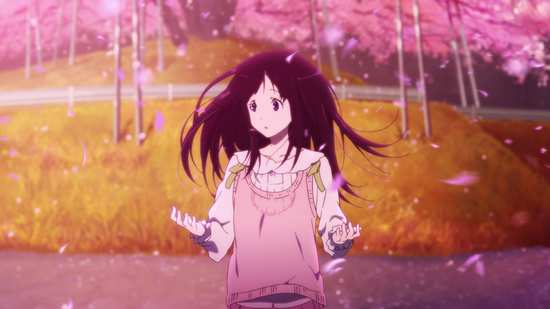 Where this half of the series improves over the first half is the degree of character development that is shown. No doubt inspired by Eru, Hotaro starts stepping outside his traditional low energy state character, and even gets proactive about solving a mystery on more than one occasion. Mayaka has to deal with some taut relationships and petty bullying in the Manga club, Satoshi is pressed to examine his attitude, and his feelings towards Mayaka, and Eru has a moment or two of self-discovery on the way.

Hyouka has an unspectacular premise, but given KyoAni’s sublime animation, excellent characterisation and brilliant writing, it all comes together to deliver one of the best slice of life anime shows around. Sometimes you need a reason for your cute characters to do cute things, a little narrative juice to keep the intellect engaged, and that makes all the difference with Hyouka. It’s very much recommended. 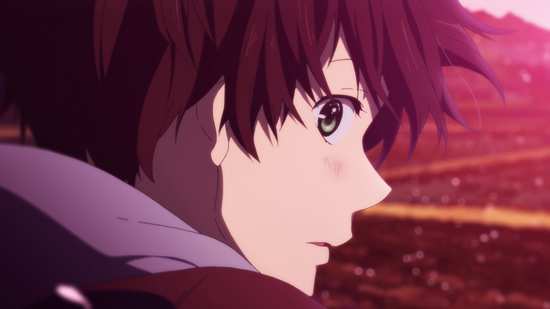