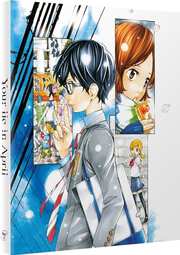 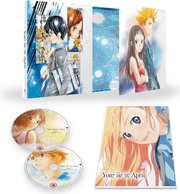 Review for Your Lie in April - Part 2 Collector's Edition

One hallmark of a good series is just how well it stays in the mind after you watch it. That can be tested with most anime releases that come in two or more parts, as it’s plain to see when you get the second part after a significant delay, just how well you remember it. You may have seen me complain on occasion in reviews when I have no recollection of what happened in a show that I last watched two or even three months prior. It’s been nearly six months since Your Lie in April Part 1 was released here, an extensive hiatus by any measure. So I was expecting to be totally lost when I put the first disc in, and started watching episode 12. It turned out to be just like picking up a novel that I had put down five minutes ago to make a cup of tea. Your Lie in April was that fresh in my mind even after 6 months and a few dozen other anime shows reviewed. That surely bodes well for its conclusion. 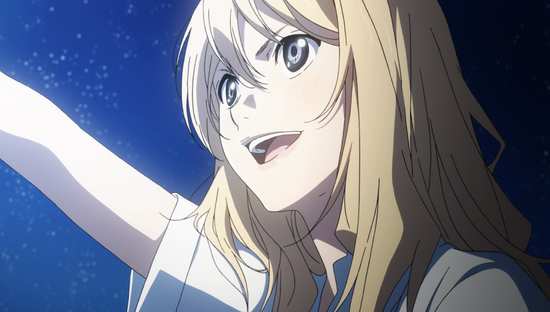 Kousei was a virtuoso pianist, a veritable child prodigy, who enthralled in competition, and was tipped to go on to great things. Then at age eleven, his mother died. She was the one who had driven him to aspire to perfection as a pianist, and for whom he was determined to succeed. Since then, his world has been monochrome, and he’s been unable to play the piano. Then three years later, his childhood friend Tsubaki introduces him to her classmate Kaori. She’s a violinist, but her free spirit and passion for music is a far cry from the regimented perfection that he had once aspired to. She challenges him in everything, even persuades him to play the piano again, but she also brings the colour back into his world... 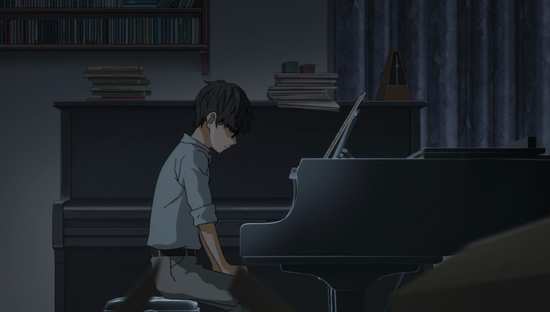 The concluding eleven episodes of twenty-two are presented on two Blu-rays from All the Anime. 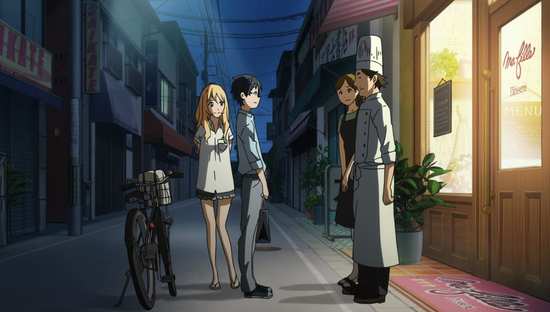 Your Lie in April gets a 1.78:1 widescreen 1080p transfer, and it is impeccable to my eyes. Certainly I see no problem with compression or other digital artefacts, and even banding is completely absent. The image is clear and pin sharp throughout, the animation looks divine in high definition, and the show’s rich and vivid colour scheme is consistently reproduced. It’s a great animation too, with appealing character designs, and a lush and effective world design, and a whole lot of thought, time and effort put into the character animation. This is one show where the emotions and motivations of the characters come through in subtle ways as well as the more obvious. Then there is the music animation, which is better even than that in Kids on the Slope, which itself was no slouch in the department, rotoscoping musicians for its sequences. 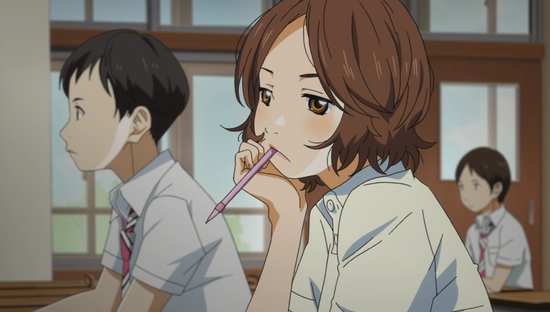 You have the choice between PCM 2.0 Stereo Japanese and English, with optional translated subtitles and a signs only track. I was perfectly happy with the original Japanese audio, but what I sampled of the English dub was pleasant enough, with no one seeming particularly miscast, and the translation flowing well and sounding natural. With this such a music oriented show, you definitely need a good audio track, and uncompressed stereo is as good as it gets, really bringing the best out of the classical music that you’ll hear in the show. The subtitles are timed accurately, and free of typos. A couple of things which aren’t subtitled at all are the theme songs, which is a shame. 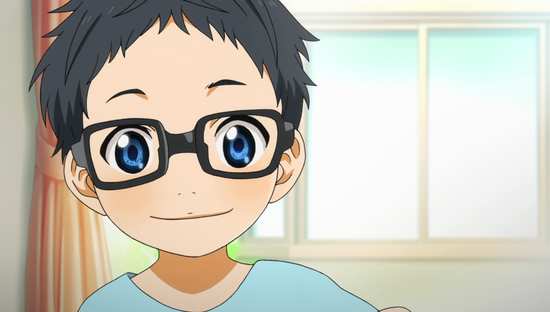 This is a Collector’s Edition release, but I’ve only seen the check discs, so I cannot comment on the packaging or any physical extras. 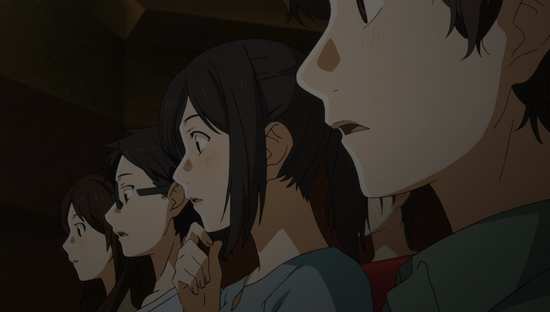 The extras on disc 2 begin with the textless credits, which this time are joined by 6:22 of bloopers, half of which seem scripted. 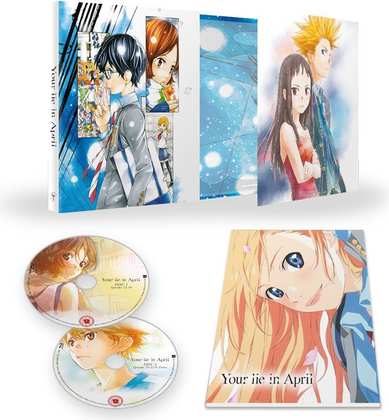 Now my challenge is to get through this review without revealing any spoilers. One thing is for sure, it’s going to be a short review. Another thing is for certain, only the most hard-hearted and emotionally dead person will fail to be moved by Your Lie In April Part 2. This story will make you cry, repeatedly. They might be tears of grief, of loss, they might be tears of laughter, tears of joy, tears of vicarious triumph, but tears are guaranteed, and this is a good thing. In fact it might just be the best thing, about a show which itself is most likely the best anime that we are going to see this year in the UK. 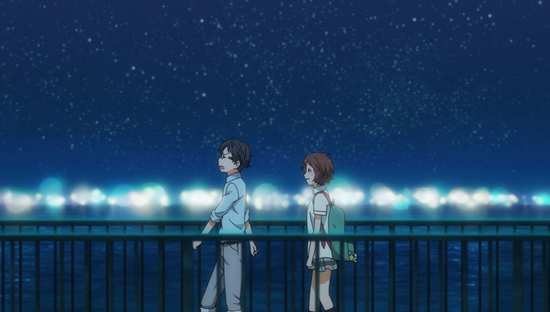 Your Lie In April does what so many other anime do, capture the lives of adolescents on the verge of adulthood, that time when possibilities seem infinite, the world seems daunting yet exciting, and first love tends to strike. Yet none do it quite as well as this show, probably because it has a more serious story to tell, about loss and about coming to terms with loss. Its characters are all likeable and appealing yet feel real, and the writing makes it effortless for the audience to engage and empathise with them. Unlike the first half of the series, which told its story with a degree of foreshadowing that seemed emotionally manipulative at times, there is no need for that in the second half, by which point the story’s all been set up, and it’s just a matter of playing the tale out to its end. It’s a hell of an emotional rollercoaster, right to the show’s heartbreaking uplifting conclusion. 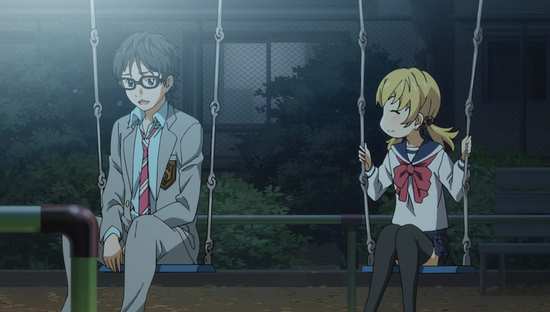 Then there is the show’s music, a classical score which is exquisite, perfectly matching the tone of the story and a sheer joy to listen to. That coupled with the show’s theatrical quality animation makes this technically one of the best anime that I have seen. And that is really all I want to say about Your Lie In April Part 2. Every superlative that you might think of applies to this magnificent series, and if you want to know more of what the story is about, the direction it heads in, as well as the characters, then I’ll point you to my review of Part 1. 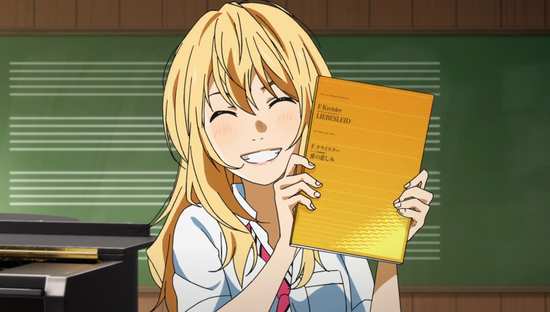 You might think that this is a cop-out review, and you’re probably right. I could write for paragraphs about what happens in these 11 episodes, the journeys that the characters go on, their personal triumphs, their failures, the moments of joy, of comedy, and yes, of heartbreak too, about just how much you can lose yourself in the series, not notice the passage of time, so engrossed you will become in the episodes, feel for the characters, wish for things to turns out differently yet still be convinced that no other conclusion would be more appropriate. I could do all that, but it just wouldn’t be fair. Everyone deserves to discover this series as I did, coming to it completely fresh. Your Lie In April is the best anime that you will see this year, and you will kick yourself for missing out if you don’t.