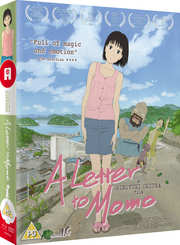 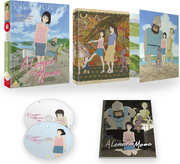 Review for A Letter to Momo - Collector's Edition

I wonder when that happened. The US studios were once renowned for wholesome, family animation of the 2D cel animated sort. A decent story, told well, heart-warming, with maybe some schmaltz, but never any cynicism. These days it’s all 3D CGI, with plenty of in-jokes and winks to the camera for the adults in the audience, and a simple story for the children. Somewhere along the line, Hollywood just gave up, and gave the crown to Japan, where 2D animated movies are still made to appeal to family audiences, with heartfelt stories, and magical animation. They can still tell stories that audiences engage with, can relate to, and it isn’t just Studio Ghibli that excel in this field. Production IG’s A Letter to Momo is a case in point, a film that tells a fantastic and whimsical tale, steeped in Japanese mythical folklore and legends, yet at its heart the story is as human as they get. I was also surprised to learn that it was directed by Hiroyuki Okiura, the director of Jin-Roh, an anime film which most certainly wasn’t family friendly fare. 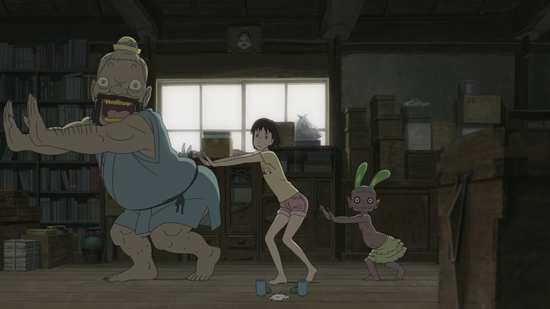 Following the death of her father, Momo and her mother Ikuko are moving to Shio Island, where Ikuko grew up. Being back home with her aunt and uncle is just what Ikuko needs to start rebuilding her life, but Momo isn’t quite ready to move on. The sleepy backwater of Shio certainly doesn’t compare to Tokyo where she grew up, and the family home is big, old and scary. What’s more, with her mother attending seminars on a neighbouring island, Momo is more often than not left to her own devices. That isn’t good when she starts hearing voices from the attic room. There are three goblins in the attic, not that anyone will believe Momo. But rather than the scary goblins of legend, and her great-uncle’s stories, these three, Iwa, Kawa and Mame are more apt to steal from the orchards and raid the fridge, than actually eat people. The last thing that Momo said to her father was that she hated him, while the only thing she has left of him is the last letter he wrote to her, which only got as far as ‘Dear Momo’. But then it turns out that these goblins might be connected to her father... 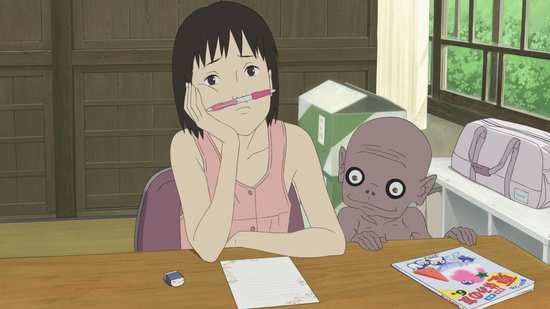 A Letter to Momo gets a 1.78:1 widescreen 1080p transfer. It’s a splendid presentation of the film on Blu-ray, clear and sharp throughout with no sign of compression or even digital banding to my eyes. Detail levels are high, and the animation is smooth and fluid. The world design is based on a real island, and you can see a comparison in the featurette, and one of the trailers. It’s artistically rendered, but recognisably realistic nevertheless. The character designs have enough in the way of detail and complexity to be reminiscent of a Ghibli film, but the comparatively subdued pastel palette reminds me more of a Mamoru Hosoda film. 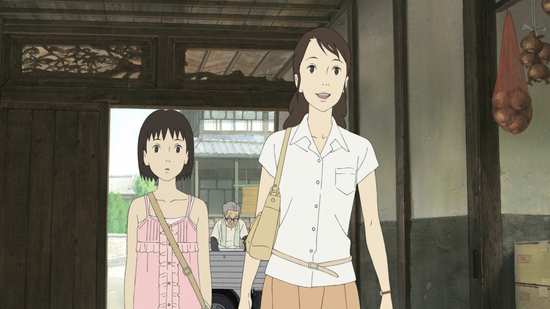 You have the choice between DTS-HD MA 5.1 Surround English and Japanese, PCM 2.0 Stereo in the same, with a translated subtitle track for the Japanese audio, a signs only track for the English audio, and an SDH English track (dubtitles) for the English audio. None of the audio options are locked, so you can chop and change at whim. I sampled the English audio long enough to confirm that it was there, but stuck to the Japanese audio for my viewing. The dialogue is clear throughout, and the subtitles are timed accurately and free of typos. It’s a nice surround track that is subtle to begin with, but really picks up for the film’s more strident moments. The music too is quirky enough to suit the tone of the story. 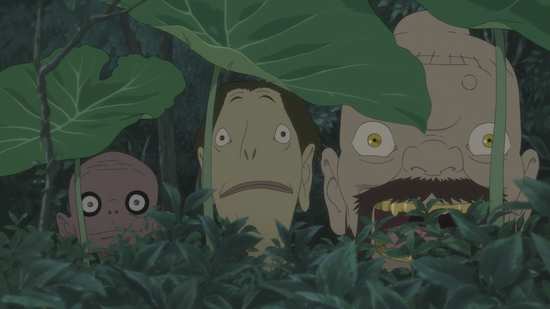 The disc presents the content with a static menu and the film is followed by 18 seconds of English dub credit pages.

On the disc you’ll find a Digital Art Gallery offering a slideshow of stills from the film running to 2:45. There are 6 trailers for the film running to 5:47 in total, presented in 1080i. There are some Animation Test Clips running to 1:04, and finally there is The Making of A Letter to Momo, a featurette presented in 1080i, running to 38:22, following the film from its inception to release, including the animation process, and the dubbing. This has interviews with the director, voice cast and more.

I haven’t seen the final retail version of this release, so I can’t comment on the DVD in the combo, the packaging, or the 36-page booklet that will be included within. 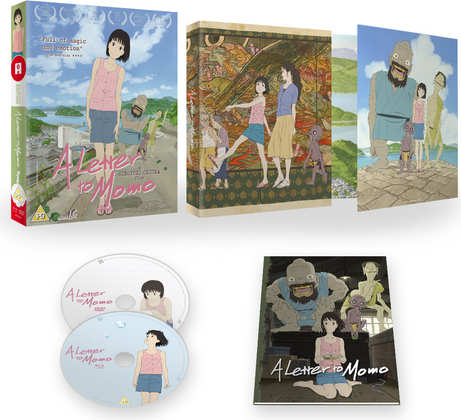 A Letter to Momo is about loss, the grieving process, and especially the feelings that young children have to come to terms with following the death of a parent. It’s also a fun, family adventure that enchants and entertains. That’s something that Japanese family animations can do really well, taking audiences through key stages of life, coming of age stories, or dealing with trauma, while being charmingly whimsical, absurd, and uplifting at the same time, and A Letter to Momo does just that. It’s not only in the visual aesthetic that I think that it’s a cross between a Miyazaki and a Hosoda film. The isolated island community living at its own pace is very much Ghibli, while the character development, especially of Momo and Ikuko has the same kind of depth as a Hosoda movie. 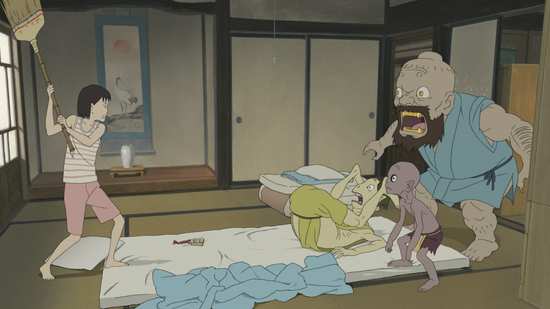 When we first meet Momo, she and her mother are heading to Shio Island, essentially to start over again. Ikuko may have a purpose in her life, but Momo is trying to do the right thing for her mother’s sake, and at the same time burdened by her last exchange with her father, angry on her part, truncated on her father’s. Both mother and daughter really wear a facade. Ikuko feels that she needs to be the strong breadwinner now, and mustn’t show anything but a brave and positive face to Momo, to provide a strong and reassuring role model. At the same time, Momo doesn’t want to burden her mother with her feelings, especially the guilt that she feels over her father, or offer any kind of dissension when it comes to the changes in their lives. 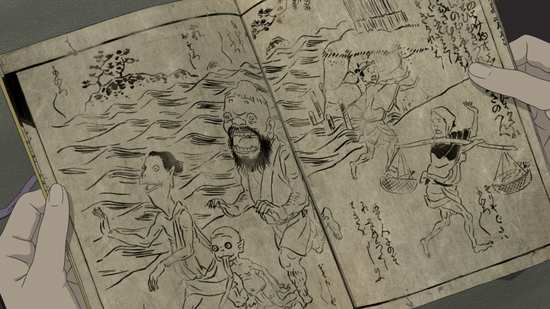 Of course that lasts as long as it takes to see their new home, and how much of a rural backwater the island actually is. But it’s still more of a childish whine than any real communication. Things begin to change for Momo and her mother when Momo discovers the goblins in the attic. As typically happens, only Momo can see or hear them, although there is a reason for this. She first hears their voices and footsteps in the attic, which make an ominous old building even scarier, and then she starts seeing their shadows. It’s a downright terrifying introduction, made even more so when she eventually starts seeing them for real. But they turn out to be more comical and annoying than actually threatening, and when she gains some measure of power over them, the balance in their relationship changes. While she’s still awkward around the other children on the island, she does now have friends of a sort with which to explore, and her exasperation with their petty thievery (they’re like magpies being attracted to shiny bric-a-brac, and they raid local orchards to eat), slowly make Momo open up and become less shy around others. And it’s that petty thievery that finally starts Momo and her mother speaking forthrightly to each other, although it is something of a painful process for both. 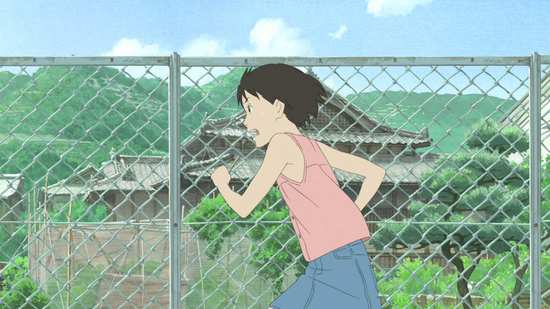 A fun, family adventure movie, with heart and a meaningful message; A Letter to Momo is just the sort of film that I’ve come to expect from anime, the kind of film that Hollywood doesn’t even try to make any more. It’s effective in the story that it tells, doesn’t feel overlong even at two hours, and it has likeable characters. It looks gorgeous as well. But as good as it is, I don’t think it quite holds up against the best Japanese family animation, most notably the Ghibli and Hosoda movies I’ve been comparing it to. In the interview with the director Okiura in the featurette, he tells how he had the idea for the story about Momo and her mother, moving to the island, dealing with loss, and then later decided to incorporate the goblins, the magical elements to the story. That does tell, as for the most part, Momo’s adventures with the goblins tend to feel separate from the rest of the film, little slice of life vignettes alternating with goblin antics, and it’s only towards the conclusion of the film that it feels as if it’s coming together. It’s not a significant problem, and the film is very entertaining throughout. I just get the sense that it could have been even better.