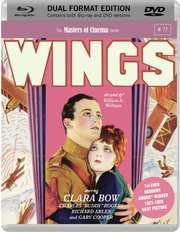 Eureka! Entertainment have announced the release of another in The Masters of Cinema series for 27th January. The dual format DVD and Blu-ray title arriving that day will be none other than the very first winner of an Academy award for Best Picture, the 1927 William A. Wellman directed Wings.

As always there will be a 40 page booklet featuring a new essay on the film by critic Gina Telaroli, excerpts from a vintage interview with Wellman, a 1930 profile of stuntmen from the film, a vintage piece on the production, personal anecdotes from Wellman and rare archival imagery.

Hometown best friends Jack and David compete for the affection of a gorgeous dame, though Jack doesn't realise that girl next door Mary Preston has eyes for him as well. But World War I is soon upon them, so the boys are off to France to fight against the Germans. Meanwhile, Mary follows Jack into enemy lines as a nurse.

Wellman's epic drama combines the most spectacular of stunts with the most classical of melodrama, along with one of Bow's greatest performances and the screen debut of Gary Cooper.