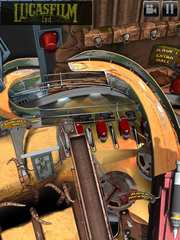 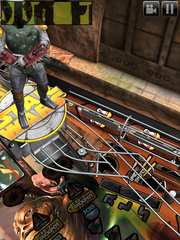 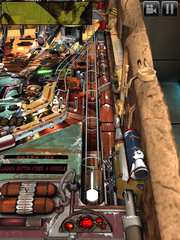 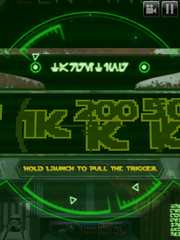 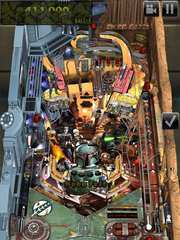 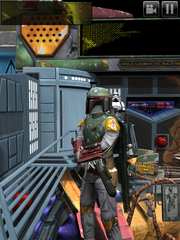 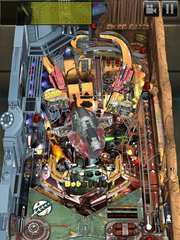 Last week, I reviewed the Epic Quest table, which is one of my favourites on the iPad. And I mentioned that the one rule I have about reviewing tables, if I can't get over 100 million points then I've not played it enough. Last night I managed to get over 100m on the new Star Wars Boba Fett table, but it felt different to doing the same on Epic Quest.

I probably put in way less hours achieving this latest table score, yet in many ways it felt way longer. Whilst doing it in Epic Quest gave me a huge sense of achievement, as I'd worked really hard to manage it, the same cannot be said for Boba Fett. Here I felt relief, and a deep desire to never, ever play this one again. 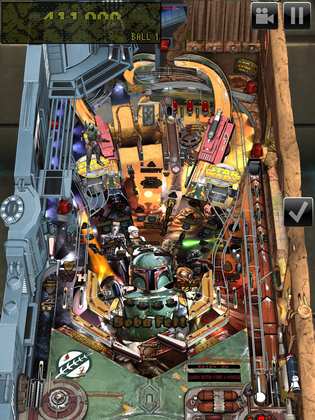 It's that Bad Guy From Star Wars!

To many fans of the classic trilogy, you know, before Lucas did a good job at ruining it all with the prequels, Boba Fett is the faceless bounty hunter in the cool khaki armour who doesn't actually capture anyone in the film but somehow gets given Solo by Vader, albeit encased in carbonite. He takes Solo to Jabba the Hut for cash, and then dies courtesy of Solo accidentally hitting his rocket packs.

Somehow, despite all that, he became cool. I blame the internet.

Here we have a whole table dedicated to the guy, which in some ways follows a similar theme to the other table I keep mentioning and shall now stop. The main aim of the game here is to be Fett, doing bounty hunting jobs which all seem to consist of hitting every single ramp before a timer runs out. 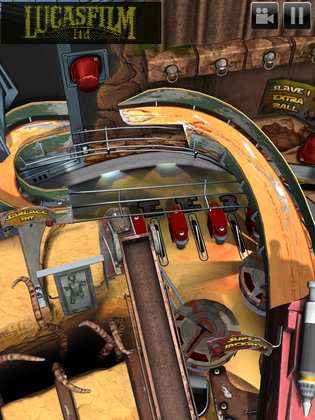 Like a few other Zen Pinball tables, this is one which has a significant feature that could never exist in the real world. Fett's ship at certain points will fly over and land in the middle of the table getting in the way, whilst you try to hit the entry ramp. Other than that, the rest of what it offers is pretty possible in the real world, with a few additional models of Fett, Vader and Jabba which appear on the table rather than the LCD display.

So here we get the usual drain holes, but no kick backs at all. Instead there is a 25 second time limited ball save that works most of the time, after you light all the roll overs near the flippers. You get combos from hitting ramps in quick succession, orbits that open up a travel mode, multiball modes with jackpot lanes, and a bounty lane which you use to increase what is called the easy bounty reward.

How that works is this, two lanes go over the sarlacc pit and one has a Han Solo frozen spinner. Jump that pit and hitting that spinner increases the reward. To collect the reward you have to have hit and lit the job light on every lane. You can keep increasing the bounty as you light them up, but the moment the ball falls into the sarlacc pit in the bounty lane, everything is reset so avoiding that is a must. 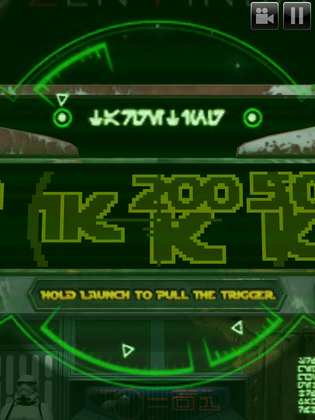 Bounty missions result in lighting up all the Empire or Jabba lights, which are done with the other pit lane and a sink hole respectively. Do these and Vader or Jabba come out of their hidey holes, hitting these once more activates the bounty mission selection. You can choose from easier or harder ones, all of which affect the timer and reward you receive.

To finish a mission you have to hit every lane before the counter drops to zero. It can be reset by hitting a lane you haven't already lit the job light on, or using a missile on such a lane. Once all are lit, you then need to hit the Slave lane to bring the ship down, and then hit the ship's ramp for the big bonus.

That locks a ball for a forthcoming multiball, gives you the bounty reward, and you get a new plunger skillshot attempt for free.

Fake Fett speech is joined by fake Vader speech, and Jabba speech which is probably fake too but heck it's Hutt, who knows! It's all quite minimal and to the point, only happening at the start of a ball, when preventing a drain, and when a mission can be kicked off.

Everything else audio wise is fine, not quite the exciting sonic-a-thon which the Episode IV table is, though there are a few bits of recognisable Star Wars music occasionally. 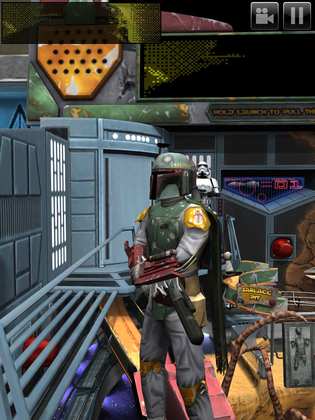 Visually it's pretty enough but even with all the lights cycling it's not the most colourful of tables. But then perhaps it shouldn't be.

I really don't like this table, maybe its my playing style or the speed, but the only way to do good on it seems to be keeping the ball moving. There isn't many easy ways to swap the ball between flippers, tilting on the iPad is hopeless. And the speed balls fly down towards the flippers you have little hope of slowing and controlling them beyond a full shot.

Maybe one for the big experts, or those who like a hit and hope approach to the game, but for me everything just seems too frantic and hurried. The table feels small as well, so the ball comes back to the flippers pretty quickly every time. Some shorts are hard enough without any pressure, but being unable to stop the ball easily like you can on many other tables, make them frustratingly difficult. 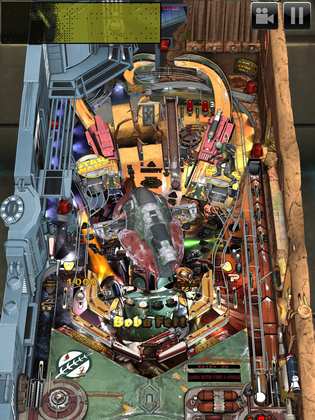 And then there is the draining, I don't think I've played a table where the ball drains so often. In fact it punishes you for being careful and trying not to drain it, by doing exactly that. Safe shots seem thin on the ground in Fett-land.

The skillshot bonus section is a tiny bit buggy, sometimes it releases before you intend to, especially if you vary the speed quickly. Other times it will just fire before you even pull the virtual plunger back.

So I guess overall, if you want a very difficult fast pinball table, then perhaps this one might be worth looking at. You can frantically spent quite a few minutes not getting much of a score before the ball drains, but if you prefer to spend longer and take a more cerebral approach to a table, look elsewhere.