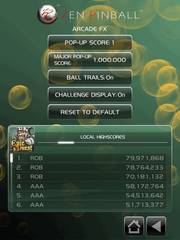 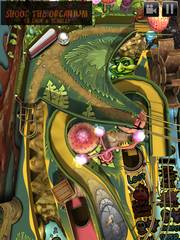 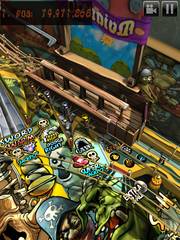 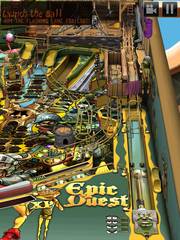 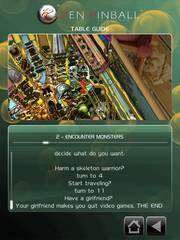 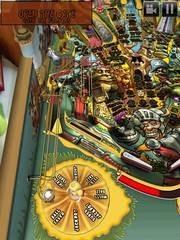 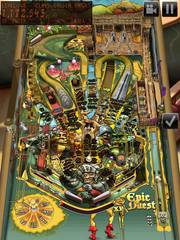 I have one rule about reviewing Zen Pinball tables, and it is this... if I can't get over 100 million points then I've not played it enough. I'm not quite sure why this arbitrary score sprung to mind, other than it seems to be the breaking point that marks a clear difference between my understanding of the table rules, and actually putting them into practise.

Today I finally managed to leapfrog my previous score in Epic Quest of 84,294,092 by quite some margin, and there is only one thing left to do once I've done that, and it's time to write a review. 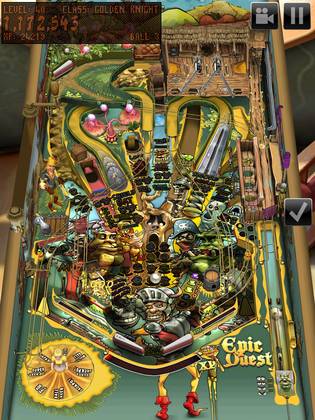 What Kind of an RPG is This???

First off, this is one of the most unique tables out there, anywhere. Because it attempts to mix elements of typical role playing games with the pinball genre, without in any way attempting to be anything other than a proper pinball game. You level up your character by fighting monsters, and get loot that is sometimes better but often way worse than what you are currently wearing.

Experience is mostly gained by killing one of the 13 monsters, performing certain combination orbits and well stuff like that. But mostly you get it from killing the monsters. 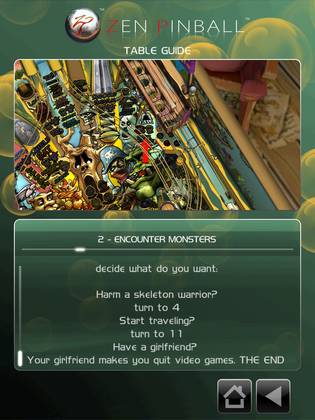 There are 100 levels for your character, all as meaningless as each other since the loot that drops and the monsters you kill all level with you. But the whole idea still manages to give a wonderful focus to the whole experience of pinball, one that is often missing beyond the simple desire for multiballs and high scores.

If truth be told, I probably could have got over 100 million if I'd just killed easy to trigger monsters over and over again, but the game encourages you to kill the standard 12 so you get a go at the big dragon which is supposed to be immune to all but elemental scrolls.

I've not managed that yet, though I've come within one monster trophy, one day... one day!

All the usual check boxes are here, you have two drain holes on the left and right with kickbacks, rollover lanes for spelling out and then allowing you to trigger the bonus multiplier, left and right orbits, an initial plunger based skillshot, an additional flipper and total of three multiball modes.

On top of that you have a ramp that leads to four drop holes that have what I can only describe as pokers next to them that allow you to push the ball into one of them. And also an additional ramp that goes to a cute bonus selection wheel made out of a princess' dress.

You can get larger points by performing ramp combinations, hitting the Smash target multiple times and through a bit of luck when you get the ball into one of the two sinkholes. 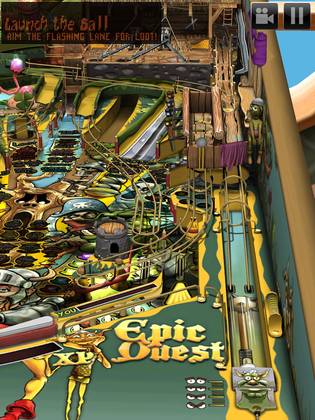 Hitting the shield ramp three times to spell out BAT starts the Bat Frenzy mode, which lights up everything between the orbit ramps as an increasing bat bonus lane. As time goes down, the number of lanes that give the bonus narrow, until it expires completely. But like everything timer based in this game, you can increase the timer by hitting the forest bumpers, which add a second per bump.

If you do ride the Sword ramp 5 times and spell out SWARM then you start the Skeleton Swarm multiball which gives you one additional ball and an infinite amount of time to crush skeletons. For each one you crush a bonus goes up, but you can only collect it if you hit the orcanium ramp, then the cave sinkhole for the next accumulated bonus, and finally the loot hole before it loops around again.

Hit enough bats or skeletons, and the extra ball lane is lit, so if you visit the mill and plop the ball in the right hole, you'll get one of those. Alas I'm not sure they stack, if you discover they do let me know.

The meat and potatoes of the game involves defeating monsters, which you get to choose from if you trigger 15 bumpers in the forest, visit the Cave sinkhole twice, or select one of the four holes in the mill, which is the same place as the orcanium, keep up at the back!

Once in a fight two bars by the flippers become health bars and you will get hit by the monster every 10 seconds, unless you do something like hit an orbit, visit the forest or hit the Shield ramp, all of which reset or increase the timer. To damage the monster you have to hit the Smash target or the Sword ramp, though if you hit the Sword ramp soon after the Shield then you get bonus damage. 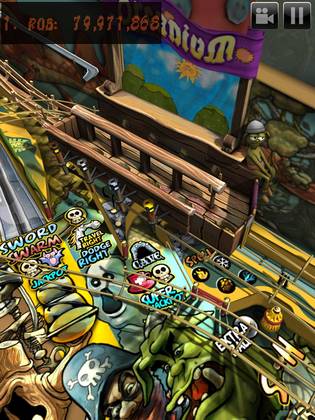 You can also waste elemental scrolls on defeating monsters, or bats for that matter, by visiting the orcanium during a fight and hitting the right hole for a scroll you've collected. But this is a waste of time if you plan on killing the dragon at the end, since that angry fellow can't be hurt with the normal ramps, only spells work on that one.

If you get defeated, then nothing bad happens beyond that monster's light not showing up. If you do defeat it, you get that monster's trophy, some XP and bonus points. Kill it without taking any damage and you get a cool additional half a million. You can also hit the Cave sinkhole during a fight to drink a health potion of which you start off with 3 and can find some randomly by hitting the orbits. 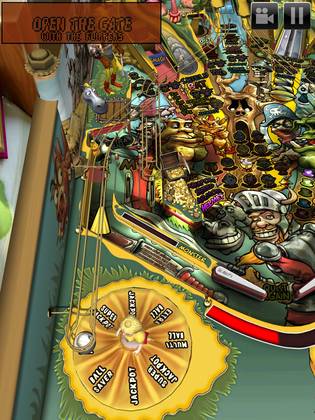 After a fight the Princess Wheel ramp lights up and you can use that to choose a bonus for the Princess Multiball. Get three balls in there, or hit the Multiball bonus in it, and you start off the big scoring part of the game. Three balls, and hitting various ramps that give you up to 5 million points a go, you can really rack up huge scores very quickly here.

The Music and Speech

There is no point telling you that this table looks good, you can see that for yourself. What I also want to share is how great it sounds, the speech is brilliant and doesn't get repetitive. The Princess is predictably stereotypical, but the brave knight is a comic creation of sheer genius.

I'm not sure what my favourite line in the game is, but, "Bats... your blindness doesn't scare me" is a very close contender.

Okay, this table isn't perfect, it has a tiny number of small issues that I really wish weren't there and can lead to huge frustrations at times. The first of these are the left and right kickbacks, you start the game with one on each side but they aren't renewed after each lost ball.

The only way to get a kickback back, pardon the phrase, is to perform four orbits and get a random reward of a kickback. If this wasn't frustrating enough, at least two thirds of the time the ball starts a drain down the right channel and is kicked back into play, it flies all the way across the table and heads down the left drain channel as well.

So often you'll lose two kickbacks like that instantly, which is very frustrating. At least the random reward will fill whichever kickback is not taken, so there is that thankfully. Though multiple orbits are sometimes the very risky thing that can can cause you to use up a kickback in the first place.

The second issue with the table, is the Cave sinkhole. The way Zen Pinball prevents a ball from getting stuck, is if a ball doesn't move for a certain period of time, it magically appears in the launcher and is fired off at maximum speed. Something is wrong with the Cave sinkhole because the ball going in there becomes stuck, and unless you nudge the table it appears in the launcher and whatever bonus or monster you were due to get from the Cave is lost. 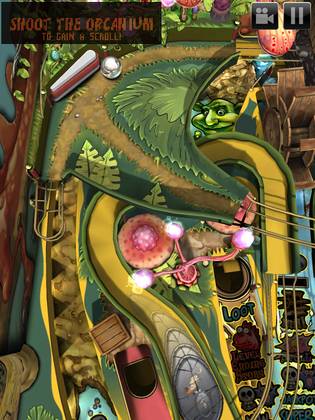 The final problem is a question of views, and the top flipper. You need to time this flipper properly to fire a launched ball into the orcanium to get yourself an elemental scroll, but because the view zooms in on this flipper at this point, the electronic scoreboard covers large parts of it and does its best to throw you off timing wise completely.

Since you can't see how fast the ball is going as it's obscured, the process is way harder than it should be. Hitting the target most other times is far easier, and pinball shouldn't be made harder for reasons like this, it's hard enough as it is.

But these are small grumbles, for an amazing table which on iOS costs just 69p. If you've really enjoyed the free Sorcerer's Lair table and want another one to play, get this now. If you've enjoyed any other Zen tables, then this is a must have, get it now.

In fact, why are you waiting? Get it now! It really is epic!

Oh and you can add me on Game Center, just search for RobeeJ and show me how good your scores are. Just 184 million to beat!