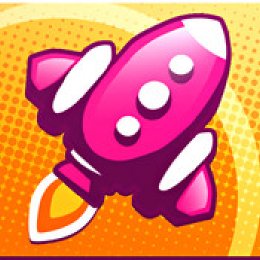 Ah, Flight Control, one of the all time classic iPhone games, simple in concept, smooth in execution. All you had to do was play air traffic controller at an increasingly busy airport and stop planes and helicopters from crashing. Using the iPhone touch sensitive screen to draw flight paths from each flying machine to the most suitable runway, it was easy to pick up, challenging and great fun to play.

Well now the creators Firemint have made a sequel of sorts, this time released under the Electronic Arts banner. Things have gotten a bit more complicated, and this time we aren't in Kansas anymore, we're in space. 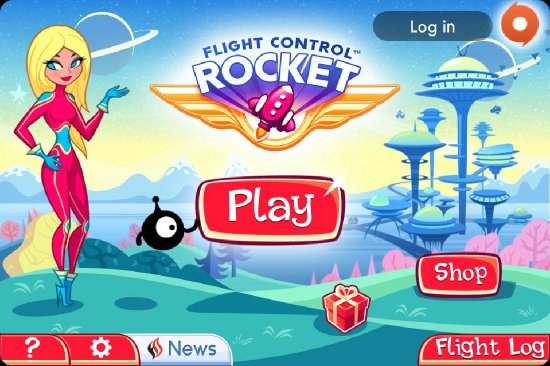 The cartoon style of the original is here, as is a funky repetitive but catchy theme tune. New iPad owners are treated to Retina artwork, one of the first few games to support this. There is also an option to sign in with your EA Origin account to share various things, I know not what, with your pals who also have it.

But don't worry, Game Center is also supported for achievements and leaderboards, so Origin isn't remotely compulsory and it doesn't even hassle you to use it, which is definitely a good thing. 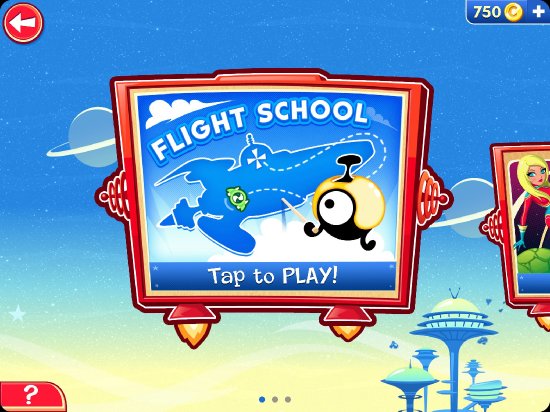 More great news, this comes as a Universal Binary app, which means you only have to purchase it once to use it on both your iPhone and iPad. The previous Flight Control came in two separate versions, so this is a very pleasant and welcomed change.

On the title screen is also a present box, which takes you straight without warning to the AppStore where you can gift the app to someone else, a warning that's what it did would have been nice, but anyway.

Also on this screen is a link to the Shop where you can make the dreaded In App Purchases. The obvious Facebook Like button which everything seems to have these days, gives you 750 coins for free, and like every other one you don't have to actually Like it to get those, just click the button and then close Facebook. From here on in, every coin has to be earned in the game or bought from the store with real money. 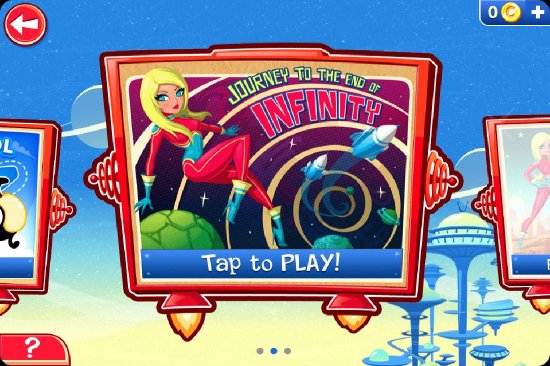 With this coinage you can buy various upgrades which assist you in various ways during actual playtime. As is the current trend, somebody somewhere will no doubt pay real spondulicks for these virtual assists, whilst others will prefer to earn them through hard in game graft. The choice is yours.

For those that have never played the original, things in that basically ran like this. Slow propeller powered planes went to one runway, faster jets landed on another, and helicopters go to the helipad. You choose their paths by dragging a line from the little moving blighters to the destination, and they follow it. Paths can cross, this isn't Ghostbusters, but when it comes to the planes, never the twain should meet. One mid-air collision and game over, otherwise the only limit to your score and the end of each game is your time.

Flight Control Rocket is set in space, with a giant mother ship and once more three types of ships which are effectively space equivalents of the ones in the previous game. So far, same game, just different graphics. 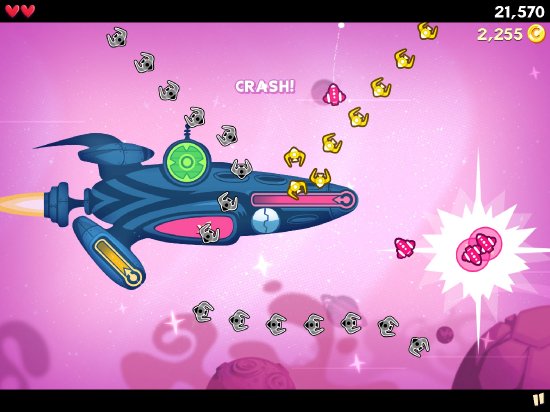 New twists are at work here however, the first of which is once some ships are directed to a landing place, they like to accelerate to turbo speed all of a sudden but do slow down if a collision is on the cards. The next one is another new mechanic where sometimes, instead of ships arriving at the edges of the screen preceded by a warning symbol, sometimes they arrive inside another large carrier and you have to transfer numerous numbers of the blighters to the mothership before it will leave.

There are also snakes, aka formations of planes that all follow the path given to the leader, tying up the chosen path for a much longer time than one ship would take. The tutorial says that there are over 15 different types of ship to be found, something that should add a bit more depth than the previous game. They all have their little quirks, from ships that fly in front of them, to those they drop behind. 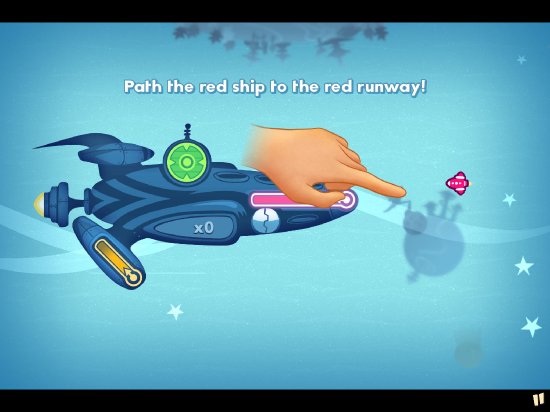 One last thing of note, the bonus multiplier. For every ship docked of the same colour in a row, the multiplier will rise. So the first green ship may get you 10 points, the second 20, the third 30, and so on, until you dock say a red ship, and then it resets to 10 again.

Obviously, every touch game is bigger and better on an iPad than an iPhone, the screens are just bigger. With that room based elephant out the way, there is no need to dismiss this title if you own an iPhone. Firstly, the fact it will run on both means if you plan on getting the other at some point, you'll be able to enjoy it on that hardware too. 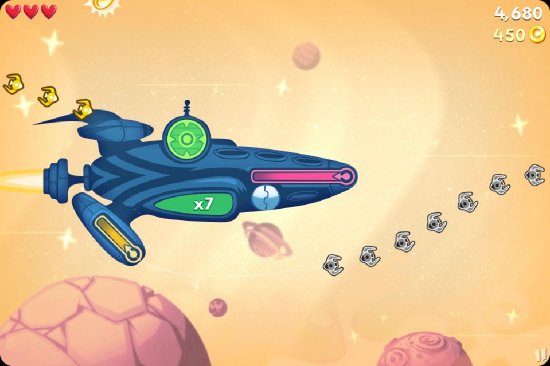 And secondly, Firemint have done a great job at designing things such that it works on the phone and iTouch devices too. Whilst iPad users can abuse multi-touch to make things a little easier in busy moments, the paths you draw are actually a tiny bit easier (or should that be less harder) to see on the smaller versions.

The original Flight Control was a thing of beauty, simple design with addictive gameplay due to its interesting list of achievements and increasing difficulty over time. The new Flight Control Rocket builds on the same design, adds some interesting twists and makes a great companion to the original.

It should also appeal to anyone with a new iPad, and anyone with an older one too, who hasn't yet experienced the joy of line drawing games. At just 69p, with the inevitable likelihood of additional motherships via game updates to follow, this should become another classic up there with the original, and the first must have touch game of the year. 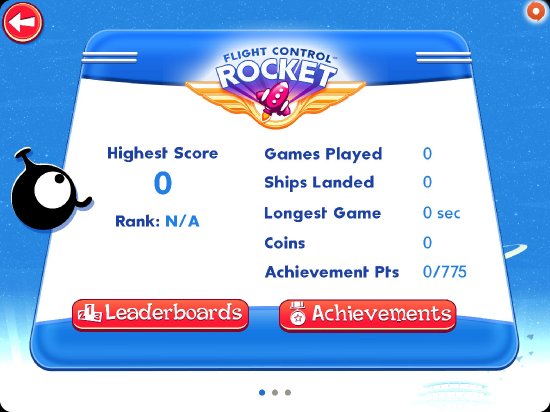 I would say that the speed at which difficulty increases is much slower than the previous Firemint offering, where lasting more than 120 seconds was a challenge at first in itself. In addition, you now get three lives, obviously in space no-one can hear you scream so somehow things have become more expendable.

This means games last a lot longer, which is a good thing, the old one was fun because it was challenging but at times it was a bit too challenging for some of the less hardcore gamers. Now, I'm not saying there isn't a place for the old mechanics, just that if you are going to reinvent the wheel and still offer the old one for sale, then you best be doing something different. Flight Control Rocket definitely does that.

Analogy time! It's like James Cameron's Aliens, you couldn't say it was better than the original Ridley Scott classic, only that it is different but still clearly part of the same franchise. The original had a few types of planes, this one has loads and loads. 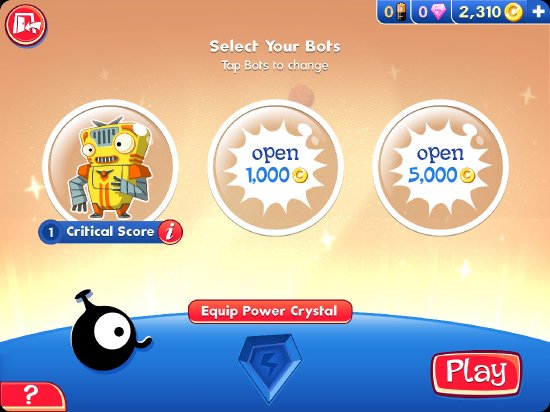 If you've read this far, then you already know you should be getting this game right now. I'm not going to try to talk you out of it, I'm too busy managing intergalactic air traffic control to try to stop you.

Before you do, just a small warning, this game does rather encourage you to spend coins, which you get either by playing for long periods or buying with hard cash. If this is the sort of thing that can annoy you, then you might want to try something else.