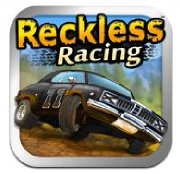 Way back in the before times, there was an arcade game called Sprint, which was later followed by Super Sprint (and many other clones), because back then in the land of the 8 bit most racing games were a top down affair. Sure you had your Pole Positions, but the real multi-player fun came from an aerial view of the track, big steering wheels and mad carnage.

Later on Spy Hunter introduced scrolling, and the Amiga brought us multi-way scrolling with the likes of Super Cars and Nitro, whilst other machines introduced variations on the format with Micro Machines being quite a popular franchise that still continues today.

Which brings us to EA Games' brand new non-franchise based Reckless Racing, an almost top-down 3D rendered racing game, with some destructible scenery and an indestructible car, plus a bunch of computer opponents to drive against. 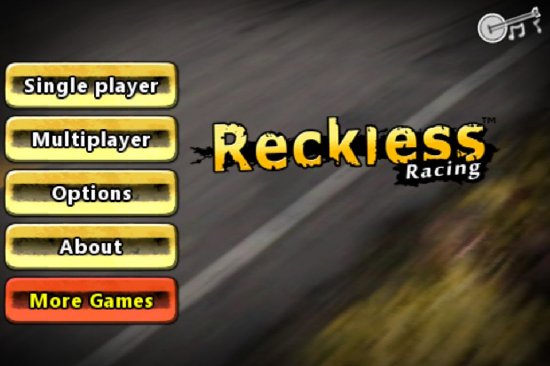 There are three ways to enjoy this game, the first is Dirt Rally which involves one of five race courses, both forward and in reverse, your choice of six vehicles with respective drivers, and three difficulty levels. Pick one of the unlocked courses, be first past the finish line after three laps, and you unlock another course.

Cars don't seem to have much (if any that I could notice) handling differences, so pick the girl in the buggy, or the redneck in the lorry, whatever suits you best. The other vehicles you ride against are the five you didn't select. If each driver AI has it's own personality, it's pretty hard to tell what they are. 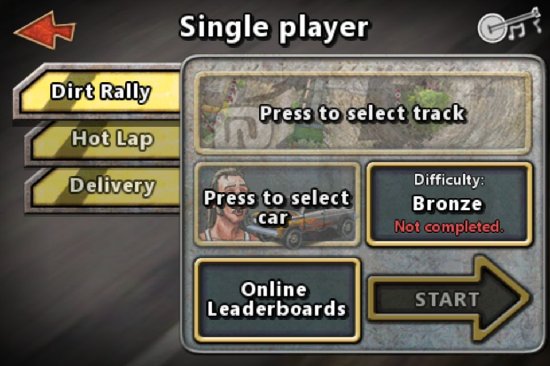 Tracks vary in length, some having more jumps than others, but the air you get from these is mostly inconsequential and generally only the purpose built ramps serve a purpose, that being to be taken badly and roll you onto your roof.

Some courses have points where if you take a corner badly, you will go off into a canyon or river, or roll into the trees onto your roof. Whenever this happens you'll get reset back to the track having lost a few seconds (and sometimes places in a close race) and a lot of speed. There is also a reset button you can hit if you bend your fender on a tree and can't be bothered to reverse out.

If racing other cars isn't your thing, you can race yourself using the Hot Lap game mode, where you try to get the fastest lap time in as many continuous goes as you can stand. Each time you beat your lap a ghost car showing your previous best lap will appear so you have some guide how you are doing. A neat touch, though I couldn't find a way to enable ghost cars to race against other than my own. 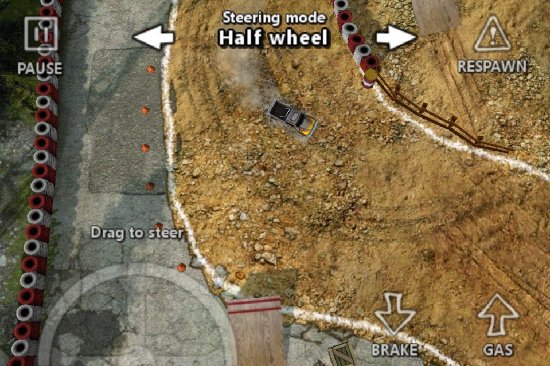 There is an Online Leaderboards option but that requires signing up, something I'm not a big fan of just to compete against other people, especially when there is a system built into the iPhone for supporting that sort of thing in games anonymously.

Finally the last game mode is Delivery, in which you must race on a fixed map specific for this job, to fulfill as many deliveries as possible. Basically drive to a random point A, then drop it off at random point B, with a time extension every successful drop. A fun distraction, nice to add a bit of variety, but ultimately the weakest part of the game.

Control is via one of five methods, standard which has buttons for steering left, steering right, accelerating and braking. Tank mode offers just three, left, right and brake, the idea being hold both left and right to go forward, take your finger off one and you steer the other way, fingers off both to not accelerate at all.

Tilt is as you'd expect, one button for accelerate, one for brake, accelerometers are used to steer. The final two modes are wheel based, you sort of drag the wheel left or right and have accelerate and brake buttons. 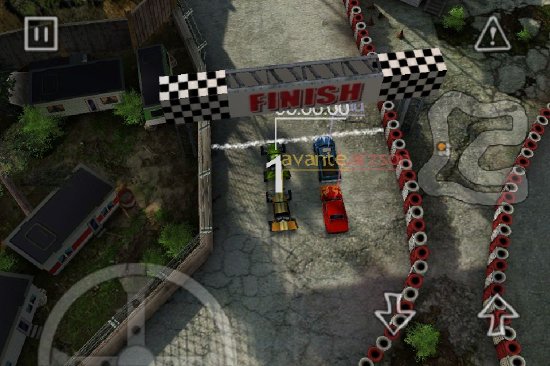 Personally I hate any attempt to put gamepad buttons on a touch screen, they never work well as you lose the important tactile feeling of a gamepad. Tilt works okay for some games, but always seems a bit twitchy and not responsive enough for fast steering. The wheel modes however, they work great, you can really do the fast over-steering required to get your car sliding round a corner and just let go to straighten out. More racing games need to add this as an option!

As if providing these options weren't enough, you can adjust the sensitivity of the wheels and even customise where the touch areas are, so if you find them too big (I'm not sure why you would but hay) you can resize, move and drag away. Excellent touches to keep the most persnickety redneck racing junkie happy.

Clicking on this option lets you find games on the Internet and searches for servers, of which only two showed up, both being based in Sweden. This scared me initially, firstly because being in the UK my ping to Sweden wouldn't be as good as to a UK based server. And secondly because I've been on Swedish servers in racing games before, and Swedes are really quite insanely good at them. 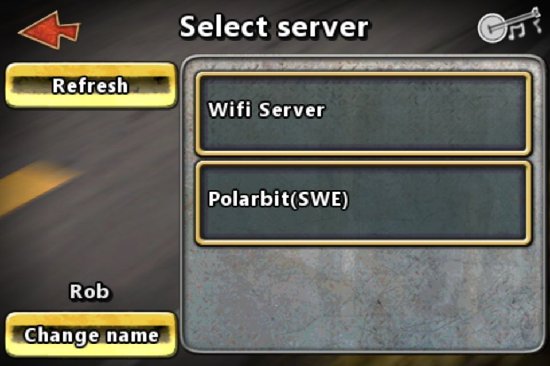 I needn't have worried, whilst the few races I did were lost, I didn't lose that badly considering I haven't played the game that badly, and the lag wasn't too bad either. But like all internet games, especially ones with collisions enabled, someone lagging around you can knock you off the road. Perhaps one best not done on 3G and limited to a wireless connect.

Once connected to a server you can host your own game or join someone else's, chat to people, play a game or two and then find another game if the opponents of this one are too easy or hard.

With a load of first person racing games on the AppStore, it's nice to have a good old fashioned top down affair like this. It nicely combines retro elements and fun with up-to-date graphics and Internet play. The tracks go from very simple to quite complex, with some fun objects that can be knocked over like lampposts, and some tight chicanes that taking too wide result in a very wet car floating down a fast moving stream. 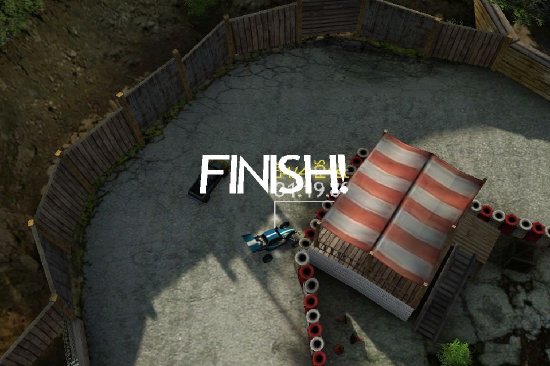 Difficulty wise, each level is just right. Gaming newbies will be struggling to win first on Bronze, whilst experienced games will find Gold just challenging enough, and once that no longer presents any difficulty there is always internet play against real opponents.

If I had one complaint it is simply the tracks aren't very distinct in look, everything is pretty much dirt and tarmac. But this is really a very small complaint, I'm getting quite picky here.

This game is great fun, ideal for anyone who loves a nice bit of top down racing, definitely the best the AppStore has to offer at the moment and a bargain at the price of £1.59, let alone the 59p it occasionally is discounted to.