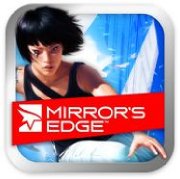 Review for Mirror's Edge on the iPhone

Free Running, otherwise known as Parkour, who'd have thought you could make a computer game out of it? Well a couple of years ago Electronic Arts did just that, for the PS3 and XBox 360, following that a few months later with a PC version. That sort of thing would probably induce too much motion sickness for me to play, but luckily they've now decided to bring the franchise, if one game can be called that, to the iPhone.

Following a similar plot to the original games, this one takes a leaf out of the Canabalt book, but rather than limiting control to jump, it adds sliding, karate kicks, balancing and a bunch of other things that you much instigate with a swipe in one direction or another. 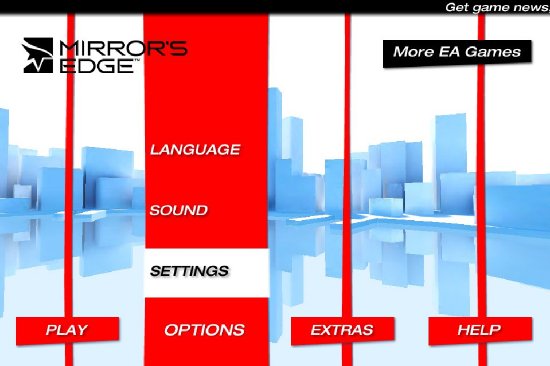 Chapters are divided into levels, which are further divided into checkpoints to stave off the annoyance of death, which can be a regular occurrence. Each level involves running from A to B, trying to conserve momentum as much as possible, since you will require it to jump certain gaps or take down enemy agents. There is no health bar, but once a certain (rather unrealistic) number of bullets hits you, death is certain and the level begins again from the previous checkpoint.

Graphics are very much of the same style as its PS3 and XBox cousins, just simplified a lot for an obviously less powerful device. But they more than do the job, and look good in places. Things you have to avoid by jumping over or sliding under are often coloured a contrasting red. 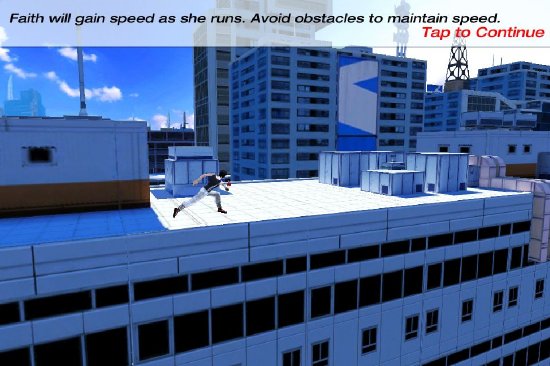 Controls are quite simple, slide right to start running right, slide left to run left, tap to stop (just don't expect to stop specifically on any given point), slide down to roll and not get injured from a great drop, slide up to jump, slide right when jumping to karate kick, and so on. The only real problem with them is remembering all the things, which the tutorial takes you through at a breakneck pace.

Those with a phone that supports multi-tasking, or instant switching as it should probably be better called, will be pleased that Mirror's Edge does indeed work with it. So you can dip in and out of the game, even mid level if you so wish, as your heart desires. 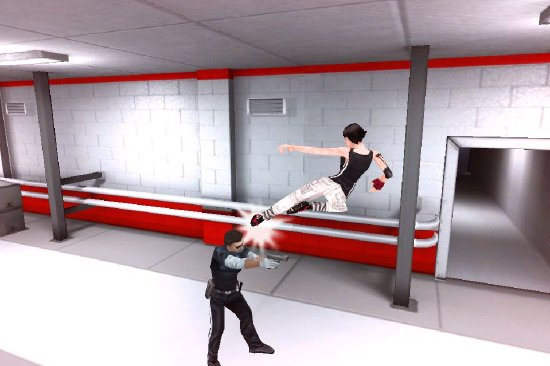 In between each level you get a Star Wars style scrolling briefing that gives you more of the back story, which you can read or not, I don't think it is important. I'm not a great one for lore myself, and this definitely seems like lore. Just give me more running and jumping please! You can of course quickly skip these bits just by tapping a finger.

Whilst very unrealistic, hay this is a game after all, Mirror's Edge is great fun, possibly more fun that Canabalt or at least as fun. Maybe not in exactly the same way, since Canabalt has random levels and only one button, and when you stop you die. Mirror's Edge takes the concept much further, letting you rest if need be, and placing the challenge as being on a specific level by level basis.

I just wish I could remember all the swipes controls! I really should go back and play the tutorial...