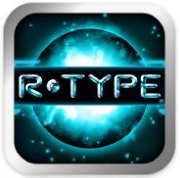 Review for R-Type on the iPhone

Oh my, they went and did it, they ported one of the best side scrolling shooters of all time to the iPhone. There are many classic old arcade games, almost all without question as challenging as the day they came out. R-Type shined back in the 80s due to its innovative power ups system, and two ways of shooting on top of that.

Forgive my geekiness, but my glee at hearing this was getting a port could be heard, actually heard within the upper ranges of dog hearing, such was the squeal. Even better, this isn't a remake but an almost 100% exact emulation of the classic original. I say almost, since what the authors have cleverly done is tie the emulated machine with modern options such as the ability to start a new game from the last level you reached. 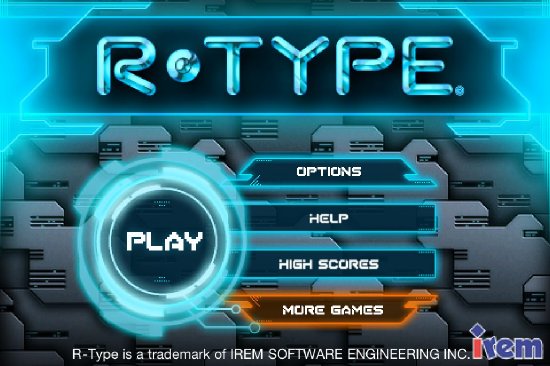 Before I dissect the actual game-play on the phone, here is a quick rundown of how this wondrously difficult shooter goes. Like most games of this genre, the screen scrolls right to left, if you hit enemy bullets you die, if you hit the scenery you die, if you crash into enemies... yes you die.

You can either spam the shoot button for bullets as fast as you can hit it, or you can hold down your laser weapon to charge it, unleashing a single much more powerful shot that will wipe out any small enemies in its path as it heads off into the distance, or heavily damage any large enemy. Scenery and various boss limbs however even stops this mammoth pulse of energy.

At key moments in each level there are two legged aliens that you can shoot which leave behind a, er, glowing thing that running over powers up your weapon systems or ship. The first thing you get is an indestructible pod that can be both fired off where it roams in the distance, or attached to the back or front of your craft. There it protects you from any projectile based weapon, but not energy based ones. Read that as bullets will bounce off it, friggin laser beams will go right through. 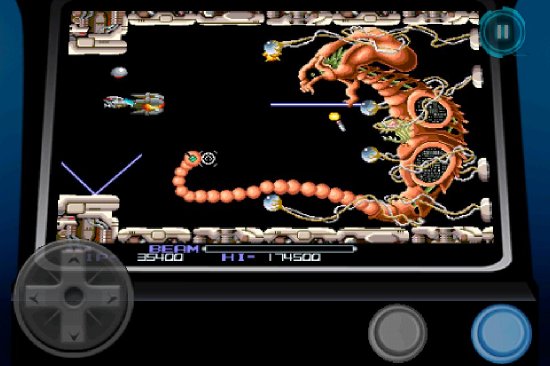 Other upgrades include speed ups, homing missiles, a side pod, circular laser beam, rebounding laser, and lastly side hugging napalm streams of flames. All are great against specific sections of each level, and less great against others. Whilst all of them but the last three can be stacked and used at the same time, the two laser beams and flame thrower thingy are exclusive. Whatever you picked up last you are stuck with.

That leads to tactics for each level being often based on picking up these weapons at the right times or not. Mostly when they present themselves you want them, but occasionally it can be better to retain your existing power up. Of course when you die, you lose everything, which can suddenly turn a slightly difficult section into a nightmare.

All of this fun is sumptuously decorated in a classic 2D alien landscape with strange looking bad guys, that half look like something H.R. Giger of Alien fame might come up with, and half look like a combination of the butchers shop and local aquarium combined. Definitely one of the best looking arcade games from the 80s this, much ported to many consoles, even enjoying a fair few sequels, the original is still the greatest.

Now we come to the iPhone implementation, with such a difficult game, you probably already know what the main problem is going to be. Yes, the controls, of which three very different types are offered. Two stretch the play-field to the full screen of your handheld device, these being the touch to move option, and the tilt to move. The third which has touch screen arcade controls, shrinks and tilts the view to make way for these controls. 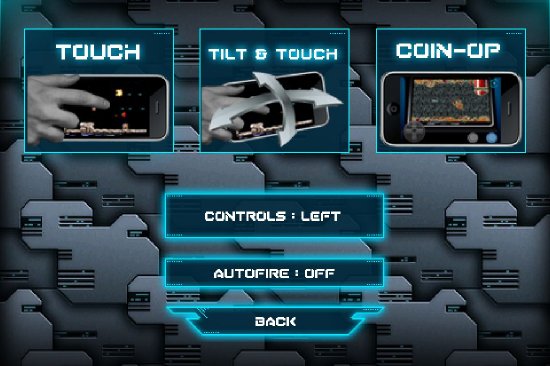 Tilt To Move
This control method is probably the most imprecise, I can't decide why specifically it is so bad. Perhaps it is the null zone in the centre being too big which means you can't really move accurately enough quick enough, or maybe the fact that tilting is just not a good way to control a space ship in a shooter.

Touch To Move
This is actually almost the best way to control the ship, however what it does is take away the speed limits of the aircraft. You can move it really fast, and I mean really fast, it pretty much goes at the speed you swipe. On one level that makes avoiding lots of things a heck of a lot easier than it should be, but on another level your finger often covers important things like enemy ships, bullets, or even your own craft.

Arcade Controls
I'm sure most touch screen users are used to these by now, or rather their presence. It's a shame that R-Type doesn't appear to support the iPhone 4 Retina display resolution, you lose a lot of detail when the screen is shrunken and tilted to make room for these controls. Add to that the basic issue that touch screen controls are no replacement for a proper push button control pad, which is of course in turn no replacement for a proper arcade stick and buttons.

And there we have it, the problem with this port, which is really no fault of the developers or the classic game itself. Touch devices are just not designed for this sort of shooter, it's hard to get around that. I'd love to give this a really high score but I just can't, because once you get to level 3 you are going to really struggle hard, not because of the game but because of the control mechanisms. 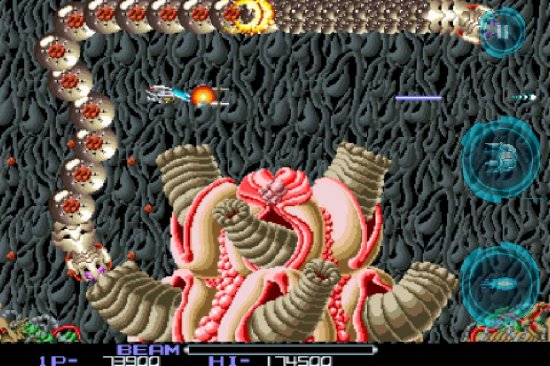 One of the hardest shooters of all time, now controlled with one of the worst control mechanics of all time. Maybe consider it when it's on special offer, or if you are really amazing with a touch control pad.