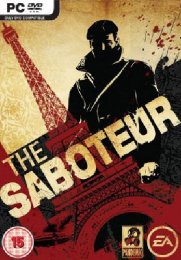 It's Paris in the mid-1940's and France has been invaded by the nasty Boche.  Sean Devlin, the hero with a silvery coarse tongue, is an Irishman trapped in Paris and drawn into the world of the French Resistance due to his hatred of Germans.  Pre-war Devlin was a racing driver with a French family team and a rivalry with a German driver, also a high-ranking member of the SS, leads to the death of his mechanic and best friend Jules.  Now Sean has a mission to help drive the Germans from Paris and get his fellow Parisians to shake off the shackles of occupation and fight back.

Saboteur is a game from now defunct studio Pandemic, who also brought us Mercenaries 2 (PC gamer so never got the chance to have a go at Mercenaries 1).  It may be their last title in under this name, but it may also be their best.  It's not startingly original, what game is these days, but the implementation is excellent.  Saboteur takes the best elements of the GTA series, adds in the climbing/hiding abilities of Altair from Assassin's Creed and tops it off with lots of killable Germans, whether Wehrmacht, SS or Gestapo.  What's not to like?

The first thing you notice in the game proper is that your sandbox playground is almost completely black and white with very little colour.  This is too hammer home the point about occupation and oppression with colour returning once you've accomplished enough in the immediate area to encourage the inhabitants to resist the invaders.  It's a clever technique and works really well, especially when it also starts raining and Sean is perched on a rooftop overlooking part of Paris with searchlights peering into the night sky and Zeppelins hovering overhead.

Yes, Zeppelins.  The design team have taken some liberties here with historical accuracy but it adds to the overall atmosphere, and besides the Germans didn't have the hardware or the capability for the vast series of propaganda speakers or sniper towers that are built all over Parisian rooftops that you'll find here.  It's all rather well done though and quite immersive.

Although the game core is mission based, you can sack these at any time and do your own thing in Paris.  I'm currently about 27% of the way through the missions and knocked them on the head to free roam and sabotage all the Nazi hardware I can find.  To help you out there's a stat menu which helpfully allows you to keep track of what is positioned within each area of the total playing area and what you've destroyed.  There's also a map where you can set waypoints and gives you a nice Sat Nav route planner when you jump into one of a myriad of vehicles.  There are also a series of perks to earn that improve your character's performance.  All this adds to increasing the games longevity, assuming you're interested in this of course as there have been accusations of repetitiveness.  I don't agree and have had nearly four hours of just wandering round Paris blowing stuff up or having pitch battles with Germans before attempting to outrun them or find a decent hiding place.

One thing that can be both annoying and satisfying at the same time is the Suspicion meter.  This is where performing suspicious activities in front of German soldiers can raise their suspicion, even when you're disguised as one of them.  Raise suspicions too far and they'll set off an alarm (if you don't kill them first) that draws any nearby German forces onto your tail.  The alarms have 5 levels, each progressively harder to escape from, and the scene of any previous ruckus has set suspicion zones where the Germans are still on the lookout for anything suspicious.  To escape you either need to find a hiding place, which you can't use if you remain in sight by an enemy, or outrun the alert area set in red on your mini map.  I've not triggered a level 5 alarm yet, but the level 4 took me a fair while to get away from.  On the other hand, on Normal settings the enemy AI is not fantastic and their inability to climb onto roofs help you out a lot, although they have sniper towers and the Zeppelins - should you trigger the airships, of course, at Level 4.

The game is a 15 certificate but I would urge caution for those parents who consider buying this for children.  The eponymous hero in this game has a tendency to swear a lot and not mild swearing either, so be aware of that.  There is also an option to have some of the female characters (mainly dancers in the hero's main hideout) to be shown without upper garments (so to speak).  With the console versions I'm led to believe that a slip of paper with a code was included within the packaging, but for the PC version it's simply an option that easily accessible.  Not convinced on the fuss on the second bit to be honest, based on other media that kids are exposed to these days, but still…

Performance wise, this feels a little laggy on my machine, but then I'm not on my gaming rig at the moment, simply a laptop.  That said, once I got used to the slightly slower speed, I've been more than happy with it and can even manage the car dynamics, which has never been a strong point of mine.

Overall this is a superb game, one of the best I've played in a long time that isn't an on-line FPS anyway.  I can't see me getting bored with this and after Assassin's Creed took the GTA design and moved it to the middle ages, it was about time that someone placed it in World War II.  It's a shame that Pandemic have bitten the dust as I can think of many other scenario's that this type of game can be utilised for.