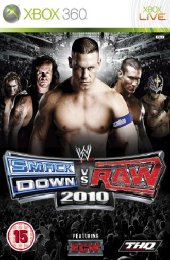 Talk to any wrestling fan about the greatest video game in that sport's history, and even if they aren't specific, they'll point you back to the N64 console of over a decade ago. Titles such "WCW/NWO Revenge", "WCW vs NWO: World Tour", and "WWE: No Mercy" featured a mixture of great characters, lots of different moves, and even a little strategy, such as making sure your finishing move doesn't leave your opponent close enough to make a break for the ropes.

There had been a lot of hope that the WWE "Legends of Wrestlemania" game would bring that sort of playability back to wrestling games, but in the end, its gameplay was bizarrely marketed towards children who aren't old enough to remember watching Andre The Giant, or even Hulk Hogan at his peak. Hope therefore was back with "Smackdown vs Raw 2010", which had become increasingly difficult to learn over the years, also impinging on its addictiveness.

The first thing to say about this game, then, is that the controls are easier to pick up than ever, even if they are largely the same as last year's game. Performing a simple grappling technique such as a bodyslam is only one button press away from being something more complicated, like a piledriver. Using the training facility in the game, you can have a variety of complex moves mastered in 10 minutes. It'll take longer to pick up all the other nuances in the game, but once you've got the ability to perform the moves, you can immediately start learning in matches against the AI.

The graphics, as you'd expect, are also exceptional, with the sets looking more like an episode of Monday Night Raw (or whichever event you choose) than ever before. The wrestlers also look fantastic, and there's a huge range to choose from, so whether you want to be John Cena, Shawn Michaels, or MVP, they're all in there. Also worth noting is the incredible amount of match stipulations you are able to put into practice. There are Hell in a Cell contests, Handicap matches, Ladder matches, Royal Rumbles, and the new Championship Scramble, where whomever got the last pinfall when the clock runs out is declared the champion.

Away from these matches, there are also the storyline modes, beginning with The Road to Wrestlemania. You can play this with your created wrestler - which is even more customisable than last year - or use Edge, Shawn Michaels, Randy Orton, Mickie James, John Cena, or Triple-H, with each storyline culminating at the biggest event of the year, Wrestlemania. These are a lot of fun, and even have some repeat-play value when you conquer your final bout.

Aside from these storylines, however, you can become your very own "booker" (wrestling matchmaker) by creating storylines yourself. This is a fantastic innovation, and something that fans had really hoped for in previous editions of the game. You can choose who to book against each other, what reason they have to be against each other, making you a virtual Vince McMahon (WWE CEO and owner). Furthermore, you can also upload your storyline to cyberspace, where it can be downloaded and played by other players across the world.

Speaking of downloading, online play may be the only place in which Smackdown vs Raw does not live up to the hype. Much like THQ's "UFC Undisputed", online lag is enough for you to feel that you aren't really in control of your player, unable to react to what your opponent is throwing at you. Had that flaw been fixed, Smackdown vs Raw would have been complete.

Overall, however, this is still an excellent game, which is difficult to see being improved for next year's edition, online issues notwithstanding. Without question, it's the best Smackdown vs Raw in the series, and it's getting ever closer to mimicking the enjoyment that fans got out of that old N64.