It only seems like six years ago since I last reviewed AnyDVD from Slysoft, during that time I've watched it regularly updated to resolve any issues, move seamlessly from Windows XP to run without problems under Windows 7 64-bit, so with Blu-ray finally taking off as the next generation format, this seemed a good opportunity to not only revisit this excellent utility but explore what the HD version has to offer.

Some things have changed in the time period, most notably a move from the original flat fee pricing structure to a time based system. Whilst you can still buy an unlimited license for considerably more dough, now when you purchase any of their products you have a sliding scale of prices which let you download updates for between 1 and 4 years. This system has been adopted by many small software houses, it certainly works well for other products where further versions give you new features, but come the expiry of your free updates you are still left with a working product if not an up-to-date one. 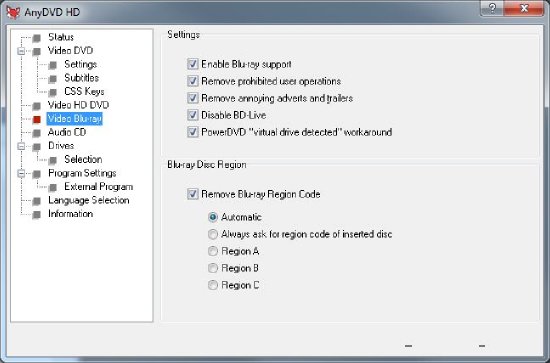 The difference here is perhaps compatibility, as AnyDVD HD is constantly being updated in the battle against studio and distributor control. There are some who argue that the genuine movie buying public always suffer in the war against piracy, it is us who must sit through endless copyright warnings, unskipable trailers for flicks we aren't interested in, just to reach the main menu. And it is us who must wait.

Pirates meanwhile get all this crap removed, and they get it all removed plus the movie for free. The poor shortsighted managers of various studios never fail to miss these facts, giving the public what they want at a price they can bare is often sidelined in favour of hair brained thoughts relating to maximising profits. But I digress... 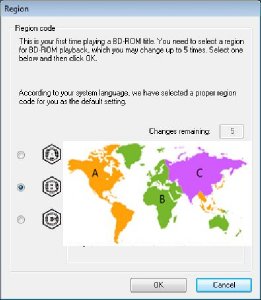 Blu-ray has to some extent fixed a number of issues, no longer is PAL or NTSC a buying decision, all regions are the same resolutions, thanks in part to the move from CRT to LCD technology. Also international release dates, at least as far as the US and UK are concerned, have been largely combined to the same week so getting the American version six months before it hits European shores is now less of a pull.

That said, there are still some films in some versions that you can only get in a region other than the one you reside, and some people still wish to rip some of the content of their discs to other media or devices. It is here that AnyDVD HD comes to the rescue, in a completely transparent way.

Over the years I've installed this on Windows XP, Vista 32-bit, Vista 64-bit and now most recently Windows 7 64-bit, without ever coming across a single issue. When you update the software to a newer version, sometimes it requires a reboot, sometimes not. It would be nice if it never did, especially considering the number of updates can be quite frequent, as these days most people don't do a restart unless there are Windows Update patches to apply, which is admittedly almost becoming as regular as those to AnyDVD. 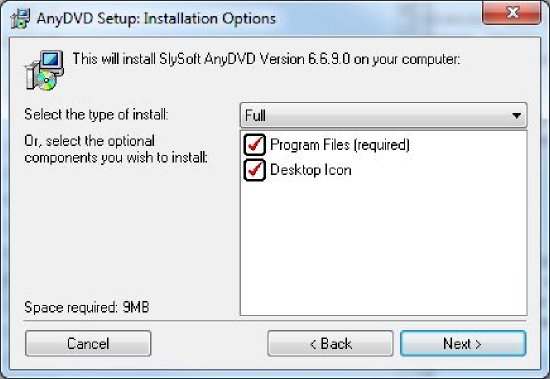 Anyhow, reboot aside, which is I guess expected for this type of software, is really simple, there are no options to speak of other than the usual which directory to put it in, and whether you want an icon on your desktop. After the reboot, you get a new little fox logo in your system tray, which when you left click brings up the options window, or right click brings up a small menu.

Over the years, I've used AnyDVD with countless DVDs. Running a DVD review website our copy has probably seen as many different disks, from buggy pre-release screeners all the way through to final finished products from every region. We've never come across a DVD it couldn't handle, bypassing all the clever schemes disk makers have thrown at it.

Supporting everything from RCE, analogue protection schemes and those based on even unreadable sectors, I can't say I've even ever noticed a disk with these once placing it in the DVD-ROM drive. One thing we do use a lot is the removal of Prohibited User Operations (PUO), aka skipping past crap you don't want to watch. Even if AnyDVD didn't make any disk you inserted region free, it would be almost worth the price just for this alone. 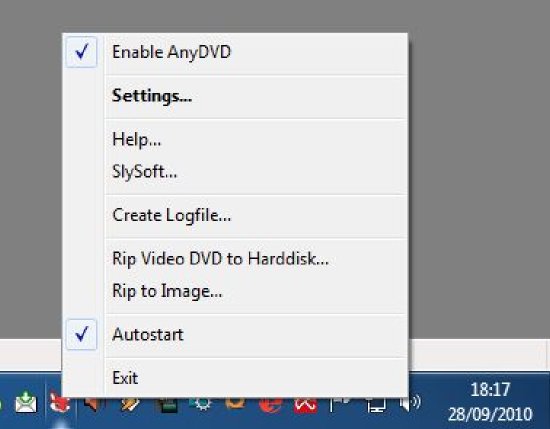 Oh and in case you didn't notice from the sceenshot, you can rip disks straight to your hard disk without a third party utility, or a region free image which you can burn later on, if you so wish.

If you want to rip a CD to MP3, usually you can just use CDex or iTunes, but sometimes you can't due to a horrible protection that some CDs began including a while back and which I think has pretty well died off now. The idea behind Cactus Data Shield, used on various Sony BMG disks, is to actually store data as partially corrupt on the CD in such a way that the error correction of PC based CD drives cannot correct it.

Domestic CD players just interpolate the data from surrounding frames, and since the errors are introduced at specific points in the original audio where this would result in the correct waveform coming out the other side anyway, the listener doesn't notice any problems. PCs however struggle because they are trying to read the data as a pure digital signal, where interpolation isn't allowed, so you hear nasty clicks and blips instead.

This is not part of the CD standard, and really annoyed a lot of genuine music buyers who suddenly found that they couldn't play their shiny new music CD on their computer.

Unfortunately at the time of writing I could not find the only CD I've come across this protection on, mainly because it belongs to my mum and I can't remember what album it was. If I do discover it I'll come back to this and let you know how it got on. 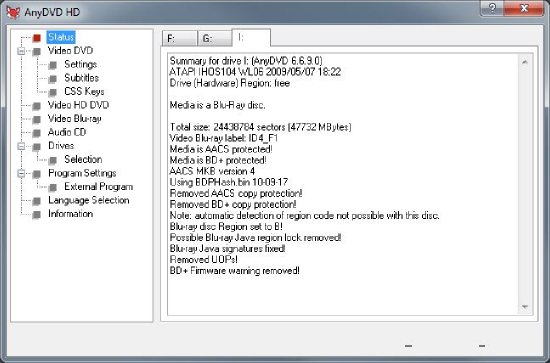 And now the biggie, the format which is now taking off in a big way, and one many studios hoped would solve all their piracy problems due to improved encryption algorithms.

Whilst DVD regions are split into 8 different areas, with only 6 being used, the studios decided to simplify things a lot with Blu-ray and just have three, usually labelled A, B and yes you guessed it, C. Region A covers the Americas, Japan and most of East Asia, whilst Region B takes in Europe, Africa and Australia. The final Region C has all the bits of the Asian continent not covered by any of the others. 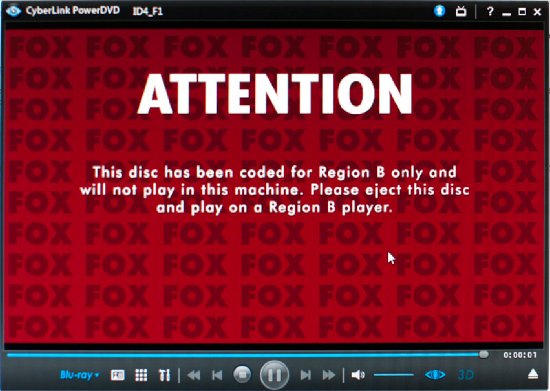 Without AnyDVD running, launching Cyberlink PowerDVD 10 and then attempting to play a Region B (which is Europe) without setting any Region, or setting the Region to A when the region selection box comes up, results in a Loading progress bar that reaches the end and then you get a disk specific message saying the disk will not play on this machine.

But enabling AnyDVD HD and a different story comes up, it does exactly what it says on the tin, or website anyway. Taking about 7-10 seconds, the AnyDVD HD window pops up and scans the disk, the PowerDVD loading progress bar comes up, and then your watching the disk. That's all there is to it, simples! 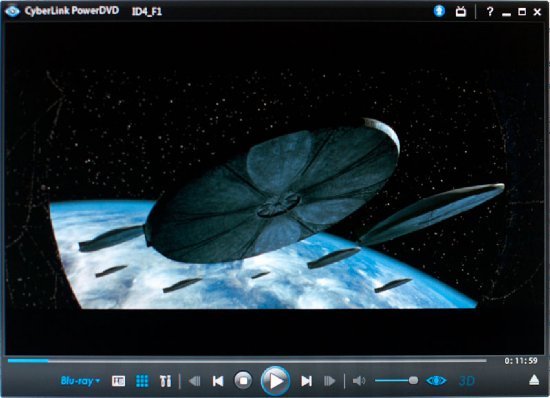 As a further test we put a few utilities through their paces as well, RipBot264 managed to fill large parts of our hard disk up without complaints, as did a beta version of BD Rebuilder. So if ripping and re-encoding such huge source files is your bag, you can now do that if you so wish, just don't expect things to be as quick as when you did this sort of stuff with DVDs. 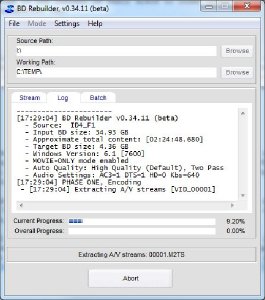 Oh, and it also works with HD-DVD so if you have any legacy discs on that format you might be able to use this to re-encode them as Blu-ray titles at a later date, when all the necessary software is around. That might make this a worthwhile purchase for those who bought a few of those and find themselves no longer to play them back for one reason or another.

Not content with the removal of copy protection, AnyDVD offers other features too. For those who playback DVD you can set subtitle transparency, HD-DVD users can remove parental restrictions and remove menus completely, whilst Blu-ray fans can skip annoying adverts and trailers just like DVD users can as mentioned before.

Blu-ray users can also disable Blu-ray Live from disks if they want, and can even enable an option to stop PowerDVD from moaning when it detects virtual drives. There is a speed control option which will crank down the spin speed of your drives depending on the content inserted, which can be handy if you are trying to listen to a nice classical piece on a super fast but really noisy CD-ROM unit.

One interesting feature is the ability to launch a program whenever you insert a new disk into the drive or eject it, with separate selections for non-video, NTSC, PAL, Blu-ray and HD-DVD. If for some reason your system requires a change in display resolution or monitor frequency, this might be handy for you. 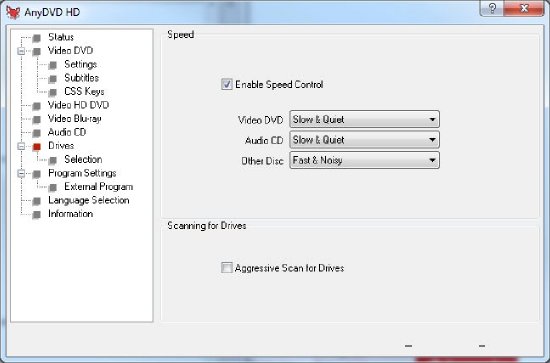 Oh and finally AnyDVD is a multi-language product, so if English is not your first tongue, you can choose from a pretty extensive selection instead.

SlySoft used to have a monopoly on this sort of software, whilst there has always been other clumsy and very long winded options when it comes to making your DVD and Blu-ray drives region free, AnyDVD and AnyDVD HD still have very little competition that I know of. There are other commercial applications that offer to decrypt Blu-ray and DVD material, but with the exception of DVDFab Passkey (currently in beta), none of them to the best of my knowledge work as transparently.

AnyDVD HD just sits in your system tray, when you insert a disk it pops up for a period of time whilst it works out how to decrypt the disk, then it's done. That's it, nothing else you have to do, you can launch whatever media player you want, whether it be PowerDVD or something else, and play the disk back as if it was region free.

Whilst the price of the HD version is quite a lot higher than the normal one, it is presumably attempting to reflect the fact you are essentially getting two products at the same time, since it supports DVD and CD as part of the package. That said it would be nice if they reduced it a bit, I'm sure many more potential purchasers would consider it at a lower price point, especially with the price of Blu-ray ROM drives now falling. 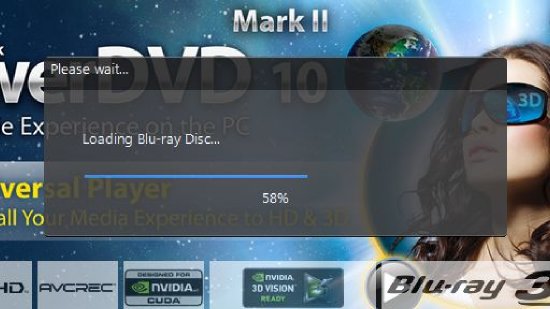