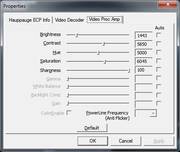 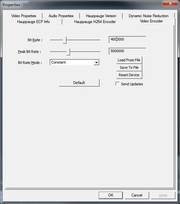 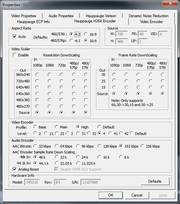 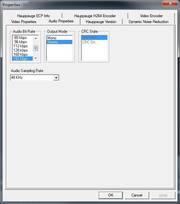 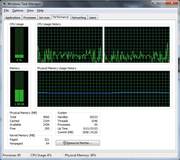 I recently reviewed the Roxio GameCap HD Pro, and unimpressed and overpriced were words that pretty much sum up the whole affair. For £120 I expected a lot more than what came in that box, but there was an alternative, courtesy of Hauppauge.

Now my experiences with Hauppauge products over the years has been a bit mixed, they made the first WinTV analogue card I bought, which was great. They also made the first digital WinTV card that I got, which worked but was very slow and for various other reasons not great. And earlier in the year I looked at their wireless Freeview gadget the myTV 2GO, which might have been great if you could get any sort of signal on it, but you couldn't, so it wasn't.

But every new product should be treated on its own merits, so here we go into the wonderful world of the video capture device, courtesy of the Hauppauge HD PVR2 Gaming Edition.

Now those of you who follow this sort of thing, will know we have a hardware sequel on our hands here. The precursor to this unit supported up to 1080i via component video pass-thru inputs, along with optical audio, and S-Video. The new unit disposes of the latter two and replaces them with HDMI.

For the recommended retail price of £139.99, and I mention this because I did in the Roxio review, so it only seems fair... what does your money get you?

Well, firstly you get a load of cables, not just lone USB one, oh no. For £10 more than the Roxio you get an additional two HDMI cables, one to plug into your XBox 360 (or Apple iOS device via the HDMI adapter) and one to go from the unit to the TV. And, you also get a component video cable for the PS3, which connects via another adapter also included. Oh and you also get a mains adapter because USB power is not enough for this little beast.

As for the unit itself, it's a nicely shaped box which has a light ring around the centre, and all the sockets at the back. It features a shiney top and a single button, more on that later. First back to the light, it's a cool touch which reminds us of Maximilian from the Disney Black Hole movie, or perhaps Deep Thought from the Hitchhikers Guide. What colour it goes depends on a number of things, not least of which being whether it's getting a signal.

As always, to do much with this device you have to install some software first. Here things take one of the first of a few slight departures from what you might expect. Normally instructions moan at you to install the drivers, then connect the device, not so here. The moment you select to install the drivers it asks you to plug it in, so we do and are presented with the first of the funky light shows. A flashing light blue tells us it has power but isn't connected, Windows 7 detects a WinTV device obviously no built in driver, so it's time to click the OK button. 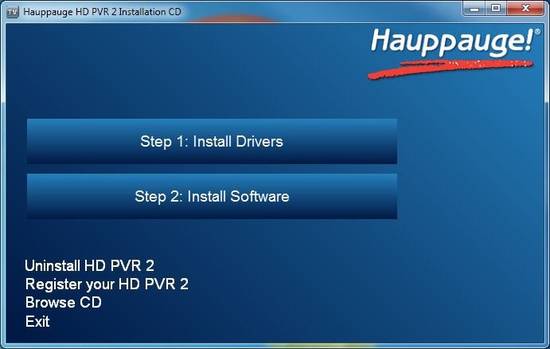 Next we get the ugliest driver install screen I think we've seen since Windows 3.1 last got a boot up, and the blue light goes absolutely nuts. Either this thing is initiating a world take over, or it's just getting excited. Once the drivers have been installed the blue light stays on permanently, and it's time to install the software.

Whilst Roxio use their own capture and editing software, Hauppauge have decided to go with ShowBiz by ArcSoft. I don't quite know why this decided to take ages to install, but it did. And then, it wanted a reboot. A REBOOT. Sigh. There is also a message about keeping the CD safe, stating it will be required for all future updates. I guess this is a result of the license agreement with ArcSoft. 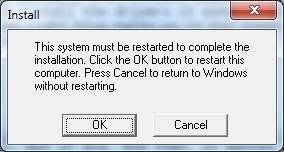 Anyway, I rebelled, you want reboot? You can't have reboot! Reboot later I click, system must be restarted it then says, cancel I click. Such a rebel. And do you know what? It ran fine without one, cheeky software.

What was left after that long installation which offered no options as to where I might want to install it, was an integrated game recording and editing solution.

The ShowBiz about page says it's version 3.5.41.80, information of which I have no idea how it relates to their commercial product, currently entitled ShowBiz 5. You go and google it, I care not, for there are many free video editors out there which you can use, as I've said before I'm not going to condemn this kind of product for not including Sony Vegas Pro or Avid something or other.

It's a tabbed affair, although the first tab is called Capture, and that's not a tab at all, it launches a capture dialog box. That dialog box at first glance is quite simple, letting you pick the capture source device (called Hauppauge Siena Video Capture) plus the video and audio inputs. Oddly it lists composite and S-Video in the drop down, along with component and HDMI, despite the device not having those inputs. 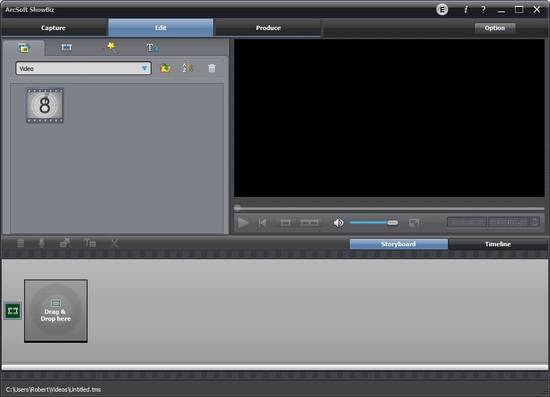 Because some people don't like to fix everything in post production, there is a device settings button which lets you alter brightness, contrast, hue, saturation and sharpness for the video signal. Audio can be captured either via the HDMI port or RCA sockets.

Output options are between M2TS, TS and MP4 formats, but don't go expecting something as simple here as just that. Oh no, despite having a built in hardware encoder, the tweakable options here are amazingly vast. You can switch between constant and variable bit-rates, 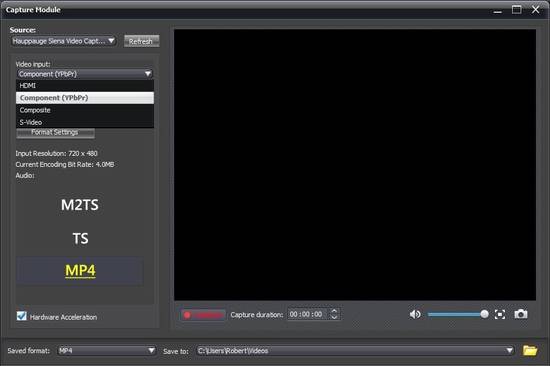 My only real complaint here is that the bit-rates are specified in, er, bits. Usually this sort of thing is done in K/bits because 4000K is a lot easier to read than 4000000. Anyway, whilst you cannot type a specific number here, that would have been nice, you can alter it from between 200K and 14000K in reasonable steps. Those values should be more than enough for pretty much everyone. You can also save and load bit-rate settings, which is handy. 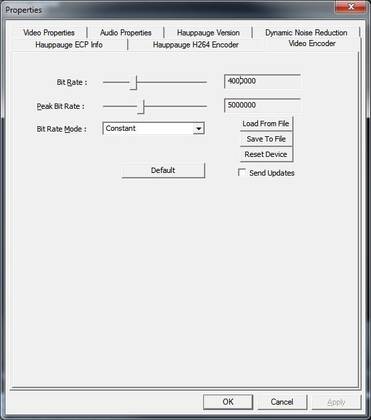 Whilst we are on the subject of bit-rates, audio can be encoded from 32kbps all the way up to 384kbps in mono or stereo. And there are a few sampling rates if the default of 48Khz is too high for you.

Other encoding options relate to the aspect ratio selection, encoder profiles and levels, an analogue boost in case your console outputs a low signal, oh and a matrix table where you can specify the resolution output depending on the source. So you might want 1080i to be output as 720x480, or perhaps you want to upscale 480p to 640p. Not all combinations are allowed, an you can always leave it at the source resolution. 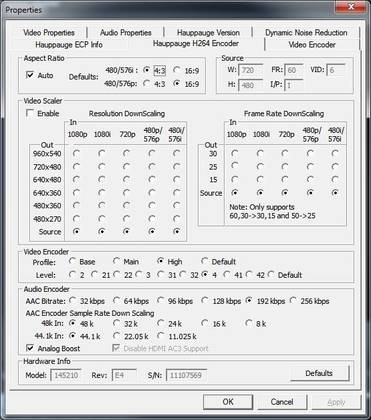 So, what about CPU usage? Well as you'd expect from a hardware decoder based solution, very low. So low in fact using the HD PVR2 with a laptop is not even a remotely scary prospect. All the hard work is done by the external USB box, so you needn't worry too much about caning the battery on a notebook. 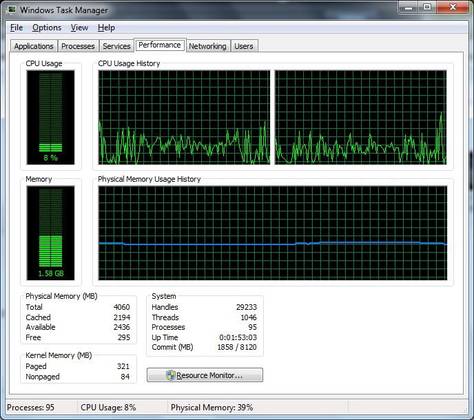 Oh, and that button we mentioned earlier? Can you guess what that does? Yep, it's a start/stop button! When you press it, the light blue, or rather light green when it has a signal, bursts into a full ring of bright green when recording. Certainly saves having to get your mouse in the right place to start one off.

First we tried something the Roxio offering failed at, we plugged in our iPad via the HDMI port and away we went. Obviously some things like the Sky app are going to refuse to output any video to HDMI, so they won't work on anything, but everything else worked beautifully. We browsed, we played games, we did our nails, and everything was "videoed" without a hitch at 1920x1080 at 29.97fps.

So that first success out of the way, we tried something from the Wii, via component. Again it all worked perfectly, and the whites were even white rather than the grey that had to be adjusted in post-production which the Roxio forced upon us. 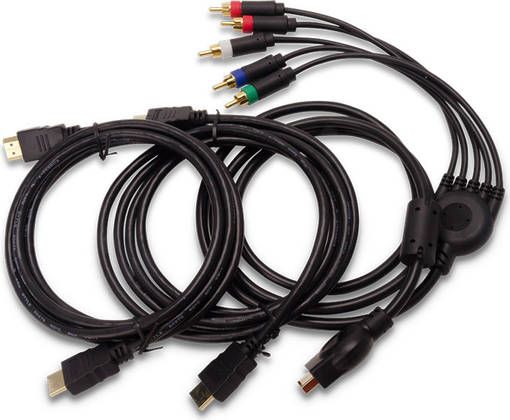 And here we hit an added bonus, despite feeding the unit a component signal, the lack of a component pass-thru had us worried initially. But we needn't have, the added bonus is HDMI out for the component in, so our Wii went into our TV via the HDMI port.

So, what to try next? Well an XBox 360 seems the logical choice, so we went onto that and took to the skies in a bit of Ace Combat, recording as we went. Again, everything just worked great. Is there nothing this box can't do?

Which leads us to the PS3, obviously the HDMI out on the PS3 is protected, so you need to use the component in and that limits the output to 1080i. And, er, I don't have a PS3 I can use to test, so I used the next best thing I could lay my hands on, a Blu-ray player.

And, well, yes that worked flawlessly too. Whilst you perhaps wouldn't want to rip your favourite Blu-ray to 1080i MP4 this way, you can at least do it if you want to. And you can certainly do the same with output from the PS3.

Here are a few examples, because a video can tell a thousand words, or something...

Just bear in mind Star Trek suffers from conversion from 24fps to 30fps here, the original recording we made was fine.

So what to say about this cute little box? It's easy to use, quality is excellent, the hardware encoder is a CPU saviour and very configurable.

Is there anything to criticise here? Well the component cable sockets feel a tiny bit loose for my liking, the audio sockets are both black so you have to stare down the hole to find out what colour goes where, and the A/V plug at the other end of all this is a bit fiddly to remove afterwards.

But yes, I'm being insanely petty here, this is a great product and definitely the one to get if for some reason you want to record from your XBox 360, PS3, iPad, iPhone or Wii.

Hauppauge, we are falling in love with you all over again!