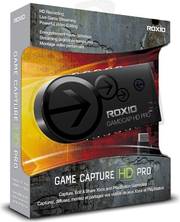 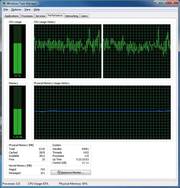 Ah, YouTube, don't you just love it? In the early ages of computer games the best idea you had of how a game looked and played was nothing more than a magazine review. Even when desk top publishing burst upon the scene and equipment arrived that would take screenshots... yes actual screenshots of games rather than relying on an SLR camera and some film, it was still not a lot to go on.

Now we are spoilt, modern consoles run at resolutions that children of the 80s could only dream of, and reviews are no longer limited to those in the employment of a commercial publication. And the best bit is you can see actual in game video footage at 1080p on YouTube! Don't you just love it?

Whilst PC users have Fraps, anyone wishing to capture the output of a PS3, XBox360 or Wii is going to need more than a bit of extra software to record their favourite game action. So here we look at one option, from Roxio, the GameCap HD Pro.

I must confess to having had this box for quite a few weeks now, not because I like to take that long getting to know a piece of hardware, but because of various issues I had trying to use it. Seasoned reviewers will know the story, encounter a problem, ask your friendly PR who sent it to you about it, wait for a response and hope the answer fixes it. 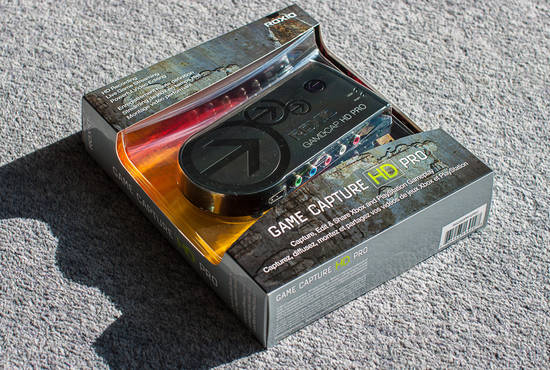 Above all, you really want to be fair to a product. Maybe you were unlucky and got a poor broken one. But after a while, you give up waiting and have to write the review, so here we go, and you can probably guess how this is going to go already.

At the time of writing, the recommended retail price for this little box is £129.99. I mention that for a reason, because when you are spending that much on something like this, you might be expecting more than what arrives.

Inside a box designed to hang on a hook, you know the type, they sit on a carousel or the wall of an overpriced retail chain, you get a small instruction booklet, a CD-ROM with software and drivers, a USB cable and the rather light hardware itself. And that's it, all the other cables you are going to need, those you are going to have to source yourself.

First things first, you need to install the game capture and editing software, and the driver, before you do anything else. So in we go with the CD, up pops an offer to check for updates online, and not long after it has all installed, and it wants a reboot. Great, I love rebooting my PC, it only takes a second, no really actually it doesn't, and I hate any piece of software that insists I do it, especially for a piece of USB kit which is supposed to be plug and play. Not a good start. 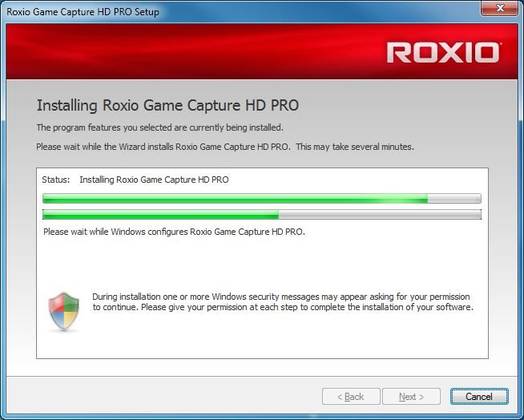 Once installed, plugging in the actual device is painless enough, drivers are detected and a light on it appears. Launching the application gives two options and links to some tutorials. Oh and a note about getting Service Pack 1 of the software, hold on didn't it check for updates before installing? I guess not well enough. Oh and it wanted another reboot after that update too. Sigh.

Now here I should probably go into the Edit & Share option which launches the video editor, but I'm not going to. It could be the greatest video editing application in the world, or the worst, it doesn't matter. The software is called Roxio Videowave, and from playing around with it initially, I found it to be not to my tastes, but as I say it doesn't matter. There are plenty of free options ranging from Windows Movie Maker right up to Lightworks, heck you can even edit these days in YouTube itself.

Clicking the Capture button takes you to the exciting part, the capture window. And here is where the first problem hits you about the GameCap HD Pro, it's insanely high CPU usage.

Even when just monitoring the HDMI input, this thing eats CPU time. Whatever hardware inside the box, it can't be doing much beyond a simple capture of the video stream because it was using 63% of my dual core E6850 all of the time. On my laptop, a machine that I'm far more likely to be able to move near where my console is, it used 100%. 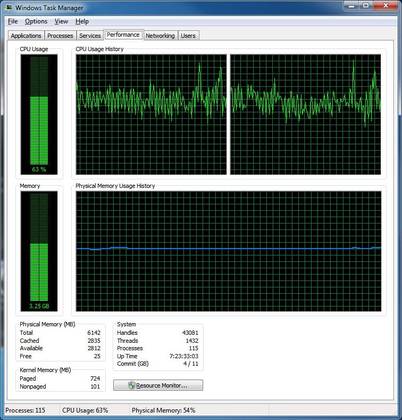 Not only do you not get any cables, I'm beginning to think you don't get any hardware encoding either. And at this point you'll already be asking yourself where exactly did that £130 you spent on it go?

Output options seem to be M2TS, which is just an MPEG transport stream, MPEG4 in this case. You can choose the quality via a slider, which changes the bit-rate from between 1,000kbps and 15m000kbps. If there are any other options, I couldn't find them, but this is good enough for a basic capture device. 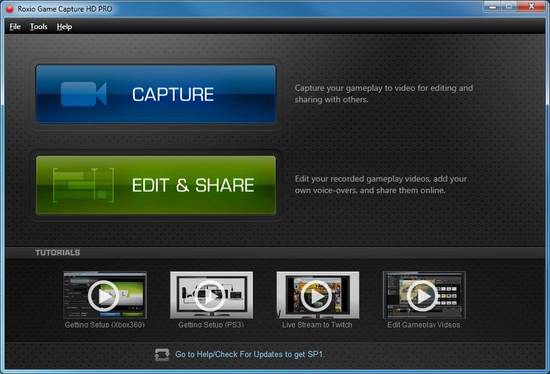 You can also output a live stream to the Twitch website, alas there seems to be no options for any other. It's a shame this is your only option, likewise with the capture software itself, either you use Roxio's or you have an expensive not-actually-remotely-heavy-enough-to-be-a paperweight.

The first thing to note, is how unhappy the software is when not being fed a signal. I'm trying to write this bit of the review, but the window keeps switching back to Roxio Capture, and so little of the controls in that window are proving to be very responsive at the moment.

But what happens when you do feed something to it? Well I thought I'd give it a go, so I dug out my iPad 3 and HDMI connector. That showed up in the live preview window quite happily, but proved completely useless. Why? Because next to the Status label in the capture window were the red words Signal Protected. The capture button was greyed out, so recording anything at all from either my iPad or iPhone (yes I tried both) was a no go zone. 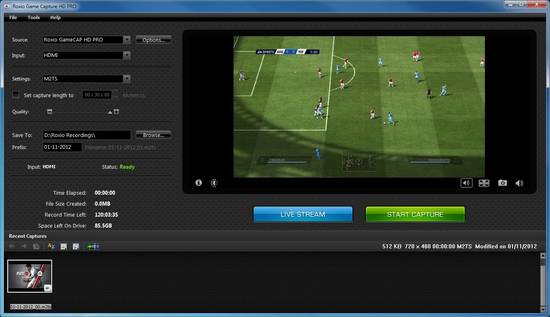 So, what next to try, I know, my Wii! I have a component out lead for that, so in that goes and again the video appears, only this time I can click the capture button, so I do. And it captures about 1 second, before carrying on pretending to be grabbing all the rest whilst not doing so at all.

I try again, same thing, until that is I set the Wii to output in 576p, at which point it finally works. Quite why it couldn't tell me it'd stopped capturing, I don't know. Surely it must know? The result of this capture is a bit grey, nothing is white, everything that should be is grey.

Still, they don't advertise this for capturing from a Wii or an iPad so perhaps I'm being cruel in even trying. On to an XBox 360!

It's quite hard to know exactly what I have the video output of this set to, but I suspect it was 720i, because I hit exactly the same issue as before. It records for a second and then stops, with no message or any warning it has done so. I could have been recording my best FIFA match ever and it would have missed the whole thing.

Maybe this isn't very reliable, or maybe it just hates interlaced signals, even through HDMI, either way this record-for-one-second is becoming a real frustrating problem.

As a last ditch attempt to get this thing to be remotely useful, I trek round to my brother's house and we set his XBox 360 to 1080p (yes I know it will only output at 720p) and see what happens. The answer? Everything seems to work fine. Yes it did eat 100% of the CPU on my laptop in the process, but it didn't seem to drop any frames from what I can tell.

The resulting videos all had a capture resolution of 720x480 but a framerate of 60fps. The marketing blurb says this can record in 720p, 1080/60i or 1080/30p, so I guess it chooses that resolution rather than run it at a much higher one at 30fps and mixing each field into one frame. But at maximum quality, the resulting video is fine, not spectacular or as sharp as I seem to remember it looking on the TV, but it's fine.

And here is a video with an example of both Wii and XBox 360 gaming, just make sure you watch it in HD to get the full effect.

What to say about the GameCap HD Pro? It's hard to be nice about it, if I'm honest, for no other reason than the price. If you are going to spend well over £100 on something that captures HDMI and component video, it would be nice if it wasn't so glitchy. It would be nice if it included all the extra cables you needed, heck even some of them would be a start.

It would also be nice if it recorded output from iPads and iPhones rather than moaning the signal is protected, when it isn't. The output from these devices is only protected when playing back certain types of video, surfing the web and playing games is not playing back video.

More tolerance towards component signals would also be nicer, when I can clearly see the output of my Wii in the preview window, running quite happily, why should it only record for a second unless I set the output to 576p? In fact why did it sometimes just record for one second and then stop, why doesn't it warn me?

Maybe, if the price point was nearer £60, you could take all of these annoyances and say, yes, this is a budget device, there are bound to be annoyances as you get what you pay for. Alas it isn't, it's £120, and unfortunately at that price it's hard to be so forgiving.