last post by Snaps
[VIDEO] The Last of Us (HBO)

last post by RJS
Flight tracking on a PC

Quote:
Snaps says...
"EDIT: Just checked dates and I'm going to miss the derby. 😨😠
They'd better not ruin my day, at least let me enjoy them on MOTD."

Watched most of it on my phone on the M6.
'Anti social b'strd' quoth Mrs Snaps.

A little dent in the domestic bliss was worth it.

Have to love Lloris. I hope they never get rid of him.
Conte and Kane are out of contract at the end of this season so things are looking not so good for them.
It would have been nice to have Mudryck but what Boehly has paid and the length of contract is insane so let's sit back with the popcorn and see how that goes.
Right now. Beating the LWCs two nil at their toilet bowl and going eight points clear is a good weekend and I'm going to enjoy this season whether we finish top or not.
We are playing well.

I think now only the black and white saudis can stop you now, and I feel for Lloris because he was at one time the best of the best imho but done now I feel.

I think Lloris has had a rick in him for three or four years now.

I've heard no comment at all about the outside back heel cross from Martinelli or using his back to cushion a cross field pass, which I gather upset Romero, so that's a plus.
Very Henry like in those confident taking the p*ss moments.

Quote:
Snaps says...
"outside back heel cross from Martinelli"
I thought that was Odegaard but I could be wrong, but Romero getting angry and Martinelli back cushioning a ball is tragic 😂

Quote:
RJS says...
"I thought that was Odegaard but I could be wrong"
Nope, Martinelli.
Bang on 50 seconds on the clubs highlights edit.

It was nice of Tottenham to stand off Odegaard twice to allow him that sighter from exactly the same position before he scored.

I am not young enough to know everything.
Thanks from: RJS

I didn't celebrate until VAR gave it because I was very worried Zinchenko was offside, not had time to watch MotD 2 yet and was in a pub so didn't see any post match analysis.

Tent Peg thinks it was a very close match and (totally unbiased) Neville says it was blow for blow. 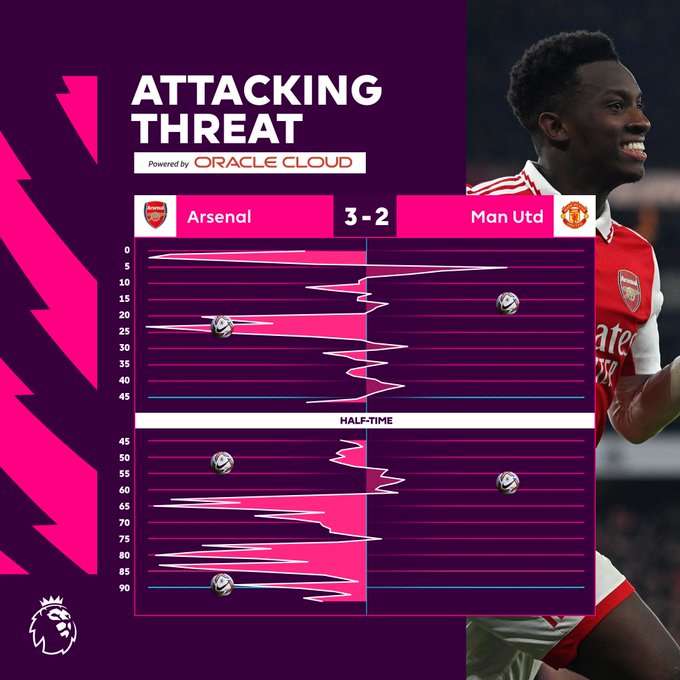 Their first was a brilliant strike from Rashford so fair play for that.
Second a goal mouth scramble some go in some don't but I'm not going to whinge about it.
Eddie was round their defence, Wan Bisaka I think, for his first header. Lovely movement and a convincing header.
Saka 😍 just being Saka for number two and very nearly got an identical follow up but for a slight deflection which made it hit the post.
Eddie in nearly the final minute just being 6 yard box Eddie again.

Our 'stand in' striker is anything but and standing up when he's needed.

Last half hour after they equalised and particularly the last twenty mins we were all over them like a rash.

In Arteta We Trust!