last post by Snaps
What are you listening to now??? (Music recomendations)

last post by admars
[VIDEO] The room next door

last post by Snaps
What We Do In the Shadows

Review
Review for The Social Network

Review
Review for The Girl In Twilight Collection

So p***ed off with Genesis over this.  Ticket prices are a joke.  I remember years ago where you got in there early and could get seats near the front.  Now, to get near the front, it's a part of the VIP package - £766 per person.  Yes, that's a seven in the front.  I've read lots online about it and, certainly among fans, the feeling is unanimous, it's a disgrace.  In the end I couldn't get any tickets for Liverpool - but could get some for Manchester, in the UPPER tier (that's a looooong way back) for £136 pp.  They can f*** right off and, as I read elsewhere, even if I had that sort of disposable income, I'm not happy with being ripped off by three multi-millionaires who I'm losing all respect for.
I can imagine lots of disappointed 'fans' at these gigs disappointed they didn't do In The Air Tonight.
I'm a big fan of Steve Hackett too (who wasn't even asked to be a part of the 'reunion') but at least I am seeing him again later in the year playing Seconds Out. 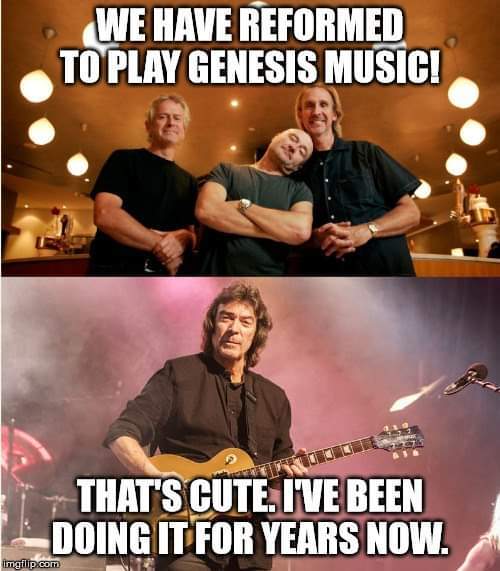 f*** that, I begrudging paid £60 to see Faith No More, my favourite band this summer at Brixton, no way I'd spend over £100 for one evening, which seems norm for stadiums now. I was glad the missus didn't want to go so I only "had" to buy 1 ticket.

I sat in the virtual ticket queue, then saw the price once I got through, and thought exactly the same.

For that money I want Peter Gabriel! The problem is people pay it. :/

Quote:
admars says...
"no way I'd spend over £100 for one evening, which seems norm for stadiums now"
Half these prices are the norm, these actual prices are ridiculous. They aren't that far away from festival prices, and look what you get to see for the price of a festival ticket.

Quote:
Robee J Shepherd says...
"The problem is people pay it."Hate myself, I've become part of the problem.
After not getting tickets cos they sold out so quickly they then announced more dates and then there I am buying tickets for the extra date.
£136 for a seat halfway back on the floor.  Decent seats but disgraceful price.
Your comment about festival pricing is so right too.  Makes it even worse.

His son has been performing in his place over recent times.

His son will play the drums so assume Philip will be doing a bit of chanting somewhere along the way :)

Quote:
marksparks999 says...
"Is Phil Collins well enough to play?"
That's an interesting point, maybe he'll be singing all the Gabriel bits? He hasn't played drums for a few years I think.

When you say 'Gabriel bits', he'll be singing all the lyrics just as he has done since '75, no matter who sang the original version.
He may do some drumming too but Nic is a superb drummer too and very influenced by his dad - which is no bad thing either.
He had a bit of a cold in the recent 'anouncement' interview but certainly sounded more than fine on his recent tour...

Had all their albums on cassette tape, but once I no longer had a car tape player as I sold my last van, I threw all my tapes in the bin.

Wish I had'nt, really miss their music while driving. But can watch their gigs on the computer.

Quote:
sj says...
"When you say 'Gabriel bits', he'll be singing all the lyrics just as he has done since '75, no matter who sang the original version"
I didn't realise that, I'm not hugely into Genesis and people keep telling me to listen to Selling England By the Pound, so that's kind of where my idea of them comes from.

Quote:
sj says...
"He may do some drumming too but Nic is a superb drummer too and very influenced by his dad - which is no bad thing either."
Nic was drumming when I saw Phil Collins at the Albert Hall the other year, and he was brilliant!