last post by RJS
A Podcast of Unnecessary Detail (FOTSN)

last post by Snaps
The All New Doctor Who Thread...

last post by Gareth Williams
Black Mirror: Anyone caught this?

last post by RJS
Winning Time: The Rise of the Lakers Dynasty

last post by RJS
Masters of the Universe: Revelation

last post by Snaps
Actually, I'm something of a Youtuber myself

last post by Pete-MK
Can you make your own replacement Li-ion battery pack?

last post by RJS
What We Do In the Shadows

Barry Cryer.
I doubt there's anyone in this country who hasn't laughed at something he wrote at one time or another.
The nicest guy I never met.
Andy Hamilton once said his anecdotes hunt in packs.
If you doubt that go and find the podcast 'Now Where Were We' he'd started doing with his son.
Not a bad epitaph and you just know he had loads more if he'd stayed.

I am not young enough to know everything.
Liked by: Robee J Shepherd alfie noakes JamesW

I had the pleasure of seeing him perform here in Ventnor soon after moving down, with Colin Sell on the piano.

Such a terrible shame.

A comedian and writer who never lost relevance over the decades, still supporting and adding to comedy and a big supporter of all the new waves of comedians down the years.

He would apparently make a point of phoning all the comedians he knew on their birthday to tell them a joke (Richard Herring revealed his on his podcast).

The end of an era sadly.

RIP... from an era when famous and celebrity meant something. 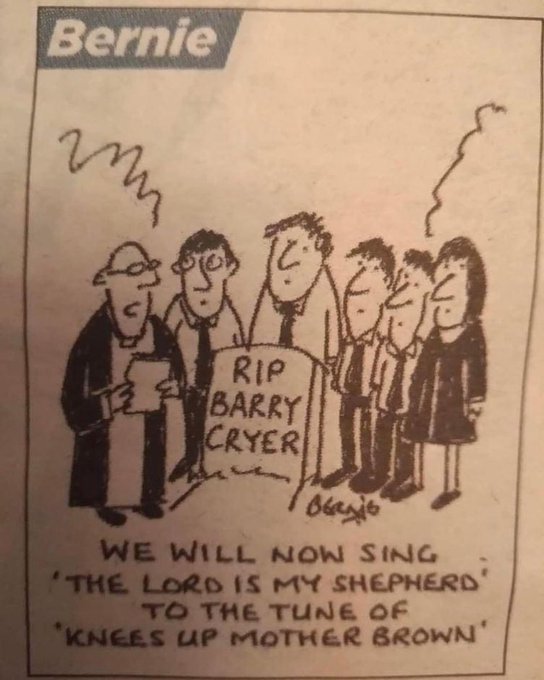 He would definitely have approved.

I am not young enough to know everything.
Liked by: Robee J Shepherd mbilko