last post by mafks
Inside No 9 (Psychoville writers' new show)

last post by admars
Masters Of The Air (AppleTV+)

Review
Review for The Fugitive

Page 1 of Has Justice Prevailed

Well verdict in for the trial of George
Floyd and the verdict in for Derek
Chauvin found guilty in all three counts.
I saw some portion of the trial and it
was so extreme in the defense making
Mr Chauvin so professional for his
encounter with Mr Floyd . But what was
more even with his mask on I could see
His arrogance like how dare you tell me
I am guilty for all three counts! I see
this going on the big screen in the future.
Stay tuned for for the sentencing or
Guess what’s next .

Wasn't going to be any other outcome.

IN MADNESS YOU DWELL

And all America’s problems have been fixed by one verdict... not.

Quote:
badboybez says...
"Wasn't going to be any other outcome."
You say this, but it seems like every other trial like this before, there was. :/

Quote:
Jitendar Canth says...
"And all America’s problems have been fixed by one verdict... not."
They should just commission a rich white guy with a history of dismissing institutional racism to investigate institutional racism and declare America to be free of racism and jolly better than all those other countries that have real problems. That will fix it.

It's a step but they have a legal system which presents as many problems as it solves.

I know its not going to change everyone
on racial views and bad racist behaviors
but we all need to change and make
accountability in this awful behavior
No regard to another human being new
Change is possible laws inforce
It will need to come forward.
I saw in Mr Chauvin in his eyes
Arrogance n how dare you ! Will
Stop. Step by step it will happen.

Have to say I'm a little wary about this trial.

I agree that he was guilty of something and should have been imprisoned, but I know doubts were initially raised over the specific charges.  That's done now as the verdict has gone the way expected.

I do think that the defence has more than reasonable evidence for appeal and potential mistrial, which is disheartening, as a number of factors can easily be argued to have had an influence on the outcome and the argument of whether this was actually a fair trial.

I'm going to ignore the evidence as that's just case building for prosecution and defence, and from my limited viewing of this trial I couldn't see anything wrong with that.

I do think that there was a lot of interference in the trial from politicians such as:

And then the very real threat of violence and rioting.

I know that the Judge specifically stated as he turned down a motion for a mistrial that Maxine Waters had given them grounds for appeal.

I'm not sure this changes anything though as we've had a few shootings since this trial started and now this: 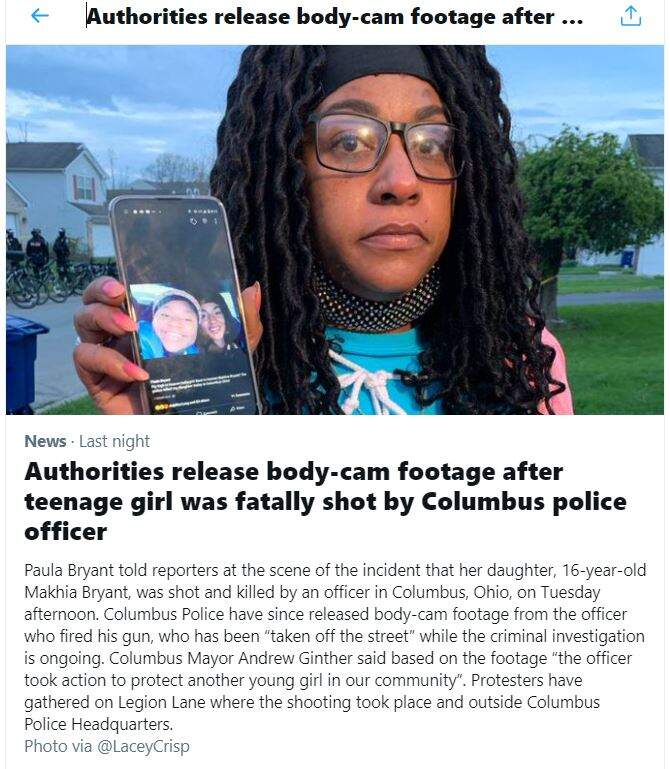 We need to wait on the full body-cam footage, because all they have released is an edited highlight. Forces have a history of doing this as a PR exercise to show things out of context.

We need to see it in full context first.

Quote:
Robee J Shepherd says...
"We need to wait on the full body-cam footage, because all they have released is an edited highlight. Forces have a history of doing this as a PR exercise to show things out of context.

We need to see it in full context first."
Agree completely, there are agendas on both sides as we've seen.

I do wish that there was some way to legislate mandatory training for cops in the US that included de-escalation techniques so their first response is not to shoot.

Quote:
Si Wooldridge says...
"I do wish that there was some way to legislate mandatory training for cops in the US that included de-escalation techniques so their first response is not to shoot."
They tried that, then some cop last week confused her taser for her firearm and killed someone anyway.