last post by admars
The Secret Genius of Modern Life

last post by admars
Ticket booking fees declared too expensive by Which?

last post by badboybez
Top Gear really is back!

Review
Review for Is It Wrong To Try To Pick Up Girls In A Dungeon?! - Season 3 Collector's Edition

Review
Review for The Dead and the Deadly

Review
Review for Son of the White Mare [Fehérlófia]

Review
Review for The One

I don't know if this is true or not, but I saw something on Twitter about Trump being the one who signed it into law that what he's done is a federal crime.

Yup, they were debating it on 4chan last night as well. Well, I say debating, more like throwing insults all over the place and insulting each other's lineage.

Quote:
The warrant indicates that FBI agents were looking into potential violations of the Espionage Act, which makes it illegal to keep or transmit potentially dangerous national security information.

The removal of classified documents or materials is prohibited by law. Mr Trump increased the penalties for the crime while in office and it is now punishable by up to five years in prison.
https://www.bbc.co.uk/news/world-us-canada-62527628

But someone did also mention that he'd 'declassified the documents' before taking them. Thing is, if you're talking about top-level security document, like the ones what he took, then even the President isn't powerful enough to declassify them.

But, you know, witch hunt, all a plot by the biased FBI (the head of which Trump himself appointed), lock her up, but her emails, etc..

Apparently the FBI 'stole' 2 of his passports (one expired) when they raided Mar-a-Lago.

No, Donnie, they weren't stolen. They were confiscated because you're a flight risk.

and so it begins, he's running again

He has to really.
His only hope surviving the avalanche of legal sh*t he's under is being top dog again.
First he has to get the Republican nomination, which is far from likely as DeSantis did astoundingly well and everyone he backed lost.
If he doesn't get the nomination I'd expect a separate MAGA party with him as the head to stand.
He'll then claim he won whatever the result and it will come down to how many MAGA nutjobs are prepared to full Jan 6th again. 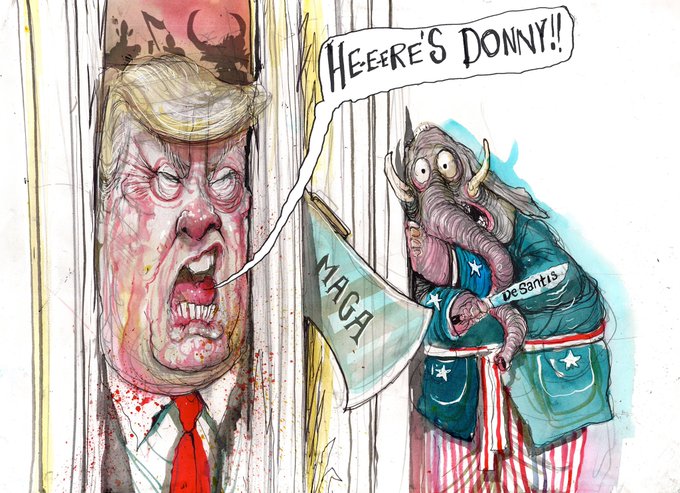 Hasn't a chance (hopefully). Everyone is calling him toxic for the GOP, including but not limited to, nearly every Fox pundit. He'll be dumped in favour of someone like DeSantis and run as an independent, which just means the nutters who still think he's god will just split the vote and guarantee Joe a second term

Yeah it looks like he no longer has Murdoch's *spits* backing.

Quote:
alfie noakes says...
"Yeah it looks like he no longer has Murdoch's *spits* backing. "
Which is all fine and well as long as Murdoch (91) lasts until the election in 2024.
His heir designate, Lachlan, is even more right wing than him and may start Trumpeting should he get the reins.

I am not young enough to know everything.
Liked by: RJS
...