last post by sj
So... what are you playing just now?

Review
Review for Highlander: The Search For Vengeance

Review
Review for One Piece Collection 23

Review
Review for The Taste Of Tea

Review
Review for The Other Boleyn Girl

Can’t believe what’s going on the tv ,Just
Saw the CNN channel a whistleblower has stuff on the Trump! Hey what have I missed? Tell me

Whistleblower provides evidence that Trump attempted to coerce the Ukranian President (prime minister) into investigating Joe Biden's son, in the run up to the next election. That's the short version. The long version includes Trump tacitly implying that the whistleblower should be executed. There's also something about the transcript (which was of a telephone conversation, the content of which could lead to his impeachment) being held in a top-level storage server that should only be used for matters of extreme national security, but I'm a bit fuzzy on that one.

tl;dr, if everyone holds their nerve, Trump is properly screwed.

May be something, may be nothing...

I think it's hard to tell for sure at the moment, but it sure has got the Democrats excited - as well as some Republicans too it must be said.

One thing that doesn't seem to be being talked about much though is what Joe Biden actually did that was worth investigating.  Don't know enough about it, but appears that Biden has admitted on video holding back money until a Ukrainian prosecutor investigating the firm of Biden's son.

No idea if this is true or not either but it's clearly linked, even if spuriously by Trump supporters...

Thank you so much in informing the latest news, I hope they get the correct information and they could proceed the process of impeachment and hope for better leadership. Pray for USA 🇺🇸

You can just watch the clip and ignore RT's commentary if you want. The footage speaks for itself.

Between this, the endless gaffes and his racist ramblings at the last debate, I really don't know how creepy Joe is still in the running.

Quote:
Pete-MK says...
"Then find a source that doesn't pander to a specific narrative. RT? Really?


Overall, we rate RT Questionable based on promoting pro-Russian propaganda, promotion of conspiracy theories, numerous failed fact checks and a lack of author transparency."
It was late and to be frank, I couldn't be arsed.

I only posted it as it had the footage of Biden clearly and publically stating he withheld funds until a prosecutor was fired.  That's the only bit I was interested in, as I think I made clear...

That's fair enough, but context is everything. And the thing about that is, the prosecutor wasn't only being targeted by Biden, everyone wanted him gone as he was more corrupt than Trump himself.

The reality is that despite the facial similarities, the situations are not the same. The differences are important to understand morally, legally, and politically. There is still more to be learned about both the Biden and, crucially, the Trump cases, and new information could change the picture, but as it stands now, the essential difference is that Biden’s intervention was aimed at fighting corruption in Ukraine, while Trump’s appears to have been engaging in it.

To summarize, Biden threatened to withhold aid if the prosecutor wasn’t fired, and he was. Importantly, Biden was not freelancing, but was acting as a representative of President Barack Obama. There’s no evidence that Biden was helping his son.https://www.theatlantic.com/ideas/archive/2019/09/biden-trump-corruption/598705/

FWIW, I'm really not a fan of Biden either.

Quote:
Pete-MK says...
"And the thing about that is, the prosecutor wasn't only being targeted by Biden, everyone wanted him gone as he was more corrupt than Trump himself."
Isn't that interfering in the affairs of a foreign country?

Quote:
Si Wooldridge says...
"Isn't that interfering in the affairs of a foreign country?"
No idea, but everything relating to the Bidens in this affair has already been thoroughly investigated by all relelvent authorities (Ukraine in particular) and they've both been absolved of any wrongdoing. the fact Trump & the GOP are clinging onto this shows how scared they are of Biden beating Trump in the next election, so they're trying to discredit him & his son with something that's royally turned around and bitten them squarely on the backside. 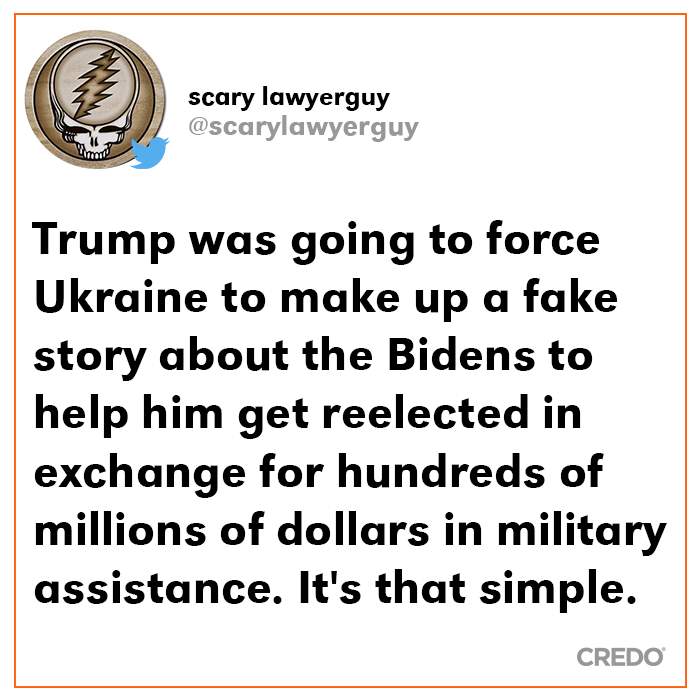