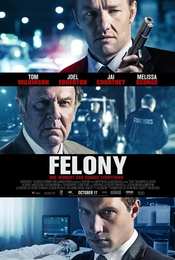 Malcolm Toohey is a good police officer, he has a great family, he seems to have the best life, but one moment changes all of that. Following being shot at in a successful drug bust, he drives home and accidentally hits a boy. He lies, saying he found him there and this lie begins to spiral out of control. He confesses to a senior officer Carl Summer, who helps him cover it up, but a rookie officer Jim Melic does not believe Toohey's story and want to get to the truth.

This film should have been great. In many ways it is. There are certainly elements of this film that are fantastic, but also parts that are really poor. I watched the film waiting for the big twist or the big moment that would make me go 'Wow!' or at least make me want to praise the film, but by the end the film seemed to lose its way.

Joel Edgerton who plays Toohey and also wrote the script gives a great performance and you can see the guilt of what he has done (I shall come to that in a moment). His interactions with the other characters are very convincing and this makes watching his journey and his thought processes intriguing.

My problem with this, is the execution of it. When I wrote in the first paragraph 'hits a boy' this is not the extreme crash with a body bouncing off a windshield, this isn't an accident with the boy swerving and you feeling the bone crunching pain of someone hitting the ground. He lightly taps someone with his car and then we see them teeter and fall in the mirror. That's it. I think I have seen 'Drive Slowly' commercials that looked more brutal. Because of this, I almost understand his desire to cover it up. This wasn't a lack of concentration, a boy that came out of nowhere or an act of rage, but just an accident. It's tragic, but of course if the boy had been wearing a helmet we might not have a plot point here.

The rest of the film is really just a 'Will he be found out before he confesses' tale. Tom Wilkinson as his superior Summer is fantastic as always. In some ways, I could almost have followed him on his journey as his character was great almost like an Australian version of David Jason's Inspector Frost. Jai Courtney as the suspicious Melic is fine, though it's never really explained why he wants to catch Toohey. I expected some twist where we find out Toohey is the reason he has been kept back, or maybe the crime resonated with him, but no he's just there to move the plot along.

As the film progresses, it feels like it is going to climax with a showdown or a confession or... something. But nothing happens and the film just seems to end. There is no real resolution and this is a shame as it could have been a very good film. Instead, it is simply adequate. The acting by everyone is great, the soundtrack apt and the direction by Matthew Saville is competent. The characters themselves were fascinating, it is just a shame that the story Edgerton went with is so bland and generic it is ultimately a little boring.

Felony is a good film, just not a very memorable one. If you like gritty crime thrillers, you might enjoy it, but you may think the confusing ending is a felony itself.