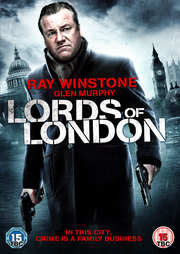 Reviewers are criminals. Bigger criminals than the dodgy geezers in Lords of London (aka Lost in Italy). Why is this? Because we get sent DVD-R review discs with the words “Property of Kaleidoscope Entertainment” burnt onto the picture for the entire duration of the film. Right in the place where subtitles might appear. This can make reviewing difficult.

If a film is entirely in English, this is slightly annoying, but not too intrusive (you kind of tune it out after a while, believe me). If however it’s on a film in which features characters speaking in Italian, then it is a real pain, because it totally obliterates whole lines of dialogue. Which makes the film harder to follow if you don’t speak Italian. My French and Spanish are reasonable, but I never learnt Italian… This is doubly difficult given that the film swaps between time periods and it might take you a little while to work out why things keep jumping around… Look at this example:-

So I’d like to tell you with confidence about the film, but I’ve missed out on some of it, so I can’t be confident about what I’ve just experienced.

What I can tell you is that it isn’t a Ray Winstone film. He features in it, certainly (as a classic nasty East End villain), but he is not the main character (despite what the publicity is trying to make you think). The publicity does Glen Murphy a dis-service since he is the real star he, as he is the man who is “Lost in Italy”. Glen is probably best known as George Green from London's Burning, and that’s certainly the main role that I remember him for.

I can also tell you that Giovanni Capalbo looks quite like Vic Reeves and plays his character well. I think I enjoyed this film, but there’s just that niggling feeling that I missed something, because so many lines of dialogue were obliterated by an unnecessary warning message. I think it’s worth checking out if you’re looking for a different take on a gangster flick, but I’m going to have to buy a copy so that I can catch up on that missing dialogue...