Writing a review for something like Secret Cinema is difficult, extremely difficult. Not because there isn't a lot to say, not because the experience wasn't wonderfully different, oh no, the problem here is giving things away. You see, mystery is a significant part of what Secret Cinema is all about, knowing what you are seeing is in many ways like knowing the ending.

Perhaps the best way to do this is start at the beginning. I decide a good way to get an idea of how this all works is to recruit my friend Anne, she's done a few of these before so knows exactly what to expect, or rather what kind of thing to expect.

The instructions are quite specific, an email declares we have been cast as Rogues. We have been given a link to a letter, written by a man called Maximilian. It in turn links to a map where we must meet our secret contact, a code word we will use to identify ourselves and a dress code that recommends a white cravat, scarf or handkerchief. Are we some kind of spy? Is this a hint to the production that will unfold? If anything it is a hint, perhaps not to the film in any specific way (so you can stop googling all those clues right now, they won't help), but to the fun this evening has in store.

With only a few hours notice, I don't have the weeks that most get to really go the whole hog with costume play, but I do own a felt hat and a white scarf. In the cold London air, this will have to do, I am at least making an effort, something I soon find is key to the whole experience. 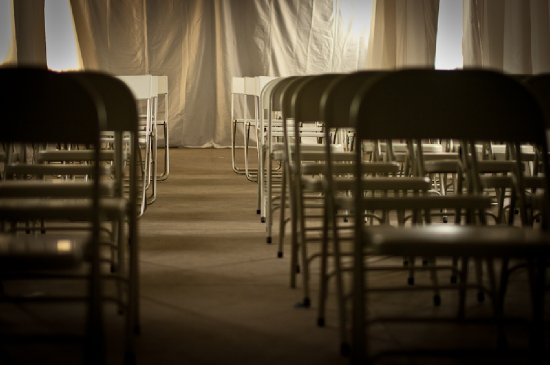 It turns out our meeting spot in London is near where Anne works, very near, this is her patch so after a quick meal at some burger bar we dash off to our rendezvous point where we meet a gentleman in uniform who is suddenly taking us through the busy streets to our destination.

This gentleman is one of the 30 or so actors who will ultimately litter the building at the secret location he takes us to. Some of them play people from the film, others are interpretations of minor characters, and yet more are merely inspired by the film's locations and scenes, many have accents. There are no wallflowers here, all of them have roles to play, and only occasionally do these exclude us the audience.

We arrive at a doorway to a building, another man in uniform checks our bags briefly, but quite what for I'm not sure. I have a big DSLR inside mine, and Anne has one in hers too. Unlike most events, cameras are very much permitted, so presumably this is a check for other things. Maybe we are spies! If so our belongings have not given the game away, our papers must be in order.

Straight after that we are in a period hotel lobby, where another actor with an accent takes our names and crosses us off a list. She hands us wrist bands in character as if this would be a totally normal transaction for the time in which we are exploring. No sooner have we proceeded past the check in desk, we are offered rooms for the night and Anne gleefully accepts them. 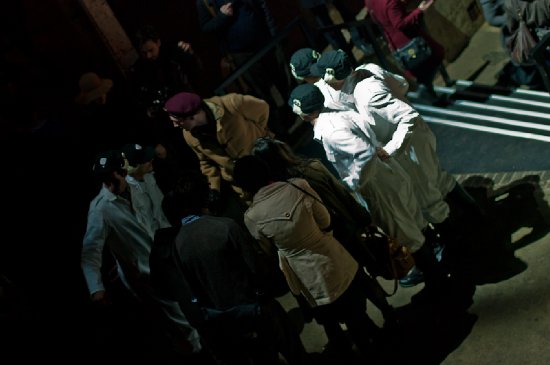 I must confess, without my guide at this point I would have become increasingly bewildered, however I am kept grounded in this alternative reality that the acting company have created thanks to the wonderful performances of this interactive live theatre that echoes all around us, and Anne's desire to participate and mesh with the event.

Knowing now what city we have been transported to, we start to wander around and pretty soon another actor with not only a dialect different from our own but the language skills to match, throws a torrent of words in our direction. Whatever she describes it sounds bad, and she soon rushes off before she attracts too much attention.

From here we move to the bar where a three piece jazz band is playing whilst a lady dances. After finishing her performance in partially cold attire, she introduces herself as Octavia, dons a fur coat and offers to take Anne and myself somewhere interesting. The last time we had an offer like that, it was from a drunken lesbian at a music festival, but we figure this is a safe one to accept and arms linked we are led up staircase after staircase, until we find ourselves at the top of the building.

This is apparently where us and our fellow Rogues will be viewing our screening of the film we still haven't guessed. Doctor Zhivago is about the best we can come up with, but since neither of us have actually seen it, the only thing we are sure of is that the film will be something we've not experienced. Octavia asks if we want to stay to look around, which we do, so warning us about bumping our heads on scaffolding, she leaves, presumably to return to the bar for another dance and then take some other people off on a jolly little adventure. 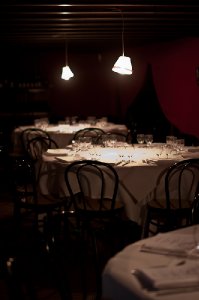 At the top of the building we begin what turns out to be an exciting exploration of the entire building. No door is left unexplored, no room not ventured into. We are at play on what appears to be film set after film set, all we later find out linked in some way to the film. These are all clues, but to a film we've not seen they are useless, we are both stumped and embroiled in the mystery.

During some moments it feels like we are wondering around a really bad museum, only we aren't shouted at for touching any of the pieces. In others we are part of the theatre, glued to whatever louder than usual sound might indicate something else is about to occur.

There is a scream from a chamber maid in one of the hotel rooms, we are encouraged to look, as an actor leaves the room he looks me straight in the eye and says that the man is dead. There is a chase, many other small scripted scenes dotted around the place. A lady in the post office wants us to deliver love letters for her, a man in uniform asks us to be on the look out for suspicious activity. 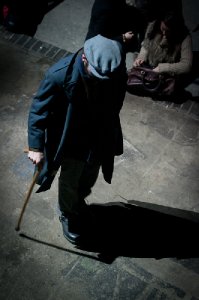 After all this entertainment would the film be a let down? Talking of which, our best guess is that this is definitely a one we haven't seen, Anne rings hubby, hubby asks if there is a certain something around, but there isn't. We give him some of the clues we have discovered and none of them ring a bell for him. But he still goes on about this certain thing and suggests the name of a film.

As showtime approaches, we make our way to where we'll be watching tonight's showing. Like the other two screening areas, this itself is a location which hints at the feature, if only we'd have seen the feature. The lights dim and we are treated to a very amusing short comedy, before they are raised once more and an actor appears with an introduction to the feature. Her performance is one final tease before the big reveal, one last clue that might just help those deeply buried neurons fire and create an aaaah moment.

For us we are still in the dark. The feature begins, opening company logos out of the way the main titles appear and the news is both good and bad. The positive is, we've not seen the film, the negative being hubby had guessed right. Not even here and he'd worked it out, though it probably helped that he'd seen it and we hadn't. It is a classic feature that we have definitely heard of, one well regarded in movie theatre circles.

During the first thirty minutes I start to contemplate whether the actual feature could be a bit of a letdown after all the build up. But soon after that the film improves and suddenly everything that went before begins to enhance the whole experience. That's why there was a room with all that stuff in, that was who that guy was, oh that's why that lady was gibbering on at us in a language we didn't understand. Like the end of a Poirot episode, events of the preceding hours all begin to slot into place. 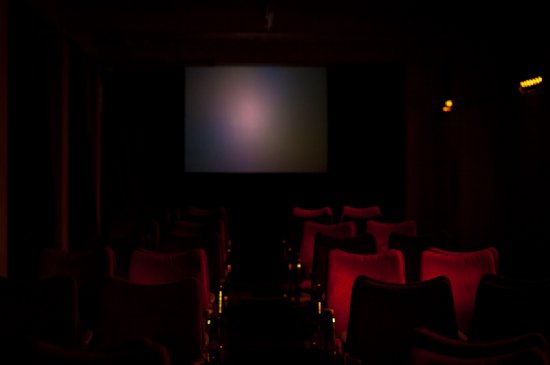 Film over, we leave, passing by actors still in character, positioned in many a photo opportunity pose. We receive an information sheet about the film itself and the live cast and crew as we head off more than contented into the night.

The company of actors that make up the Secret Cinema team have done a wonderful job in creating a live theatre experience. Combining their skills with those of the set designers and production team, they have made the building hosting this event a very interesting and immersive place to explore.

It's a very unique concept to buy a ticket to see a film without knowing what it will actually be. The clues are fun, the actors are great fun, in fact I think I can safely go as far as to say that this is now my new favourite way to see classic old movies.

The current production runs until the end of January, so if you find yourself near London between now and then, you'll struggle to see a more satisfyingly different evening of entertainment in the capital. But if you absolutely have to know what the film was, then you can always check out the spoiler below.

SPOILER:
The film was The Third Man

This sounds utterly brilliant! Screw 3D - this is the future. And yes...I had to check out the spoiler. I should have known that it would be that particular movie...;)
posted by Stuart McLean on 9/12/2011 21:58
I might revisit this after the final run of this current performance, so much more happened than I could really talk about without giving things away.
posted by Robee J Shepherd on 10/12/2011 15:01
Updated with the title of the film showed, since they are on a new production!