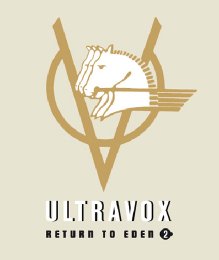 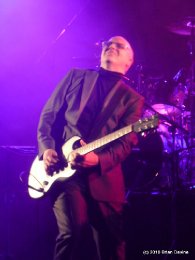 Review for Ultravox: Return To Eden 2

It feels a little strange to be reviewing this gig following the very recent review I did of the live CD/DVD set just over a week ago, but still…

Following on from their successful Return To Eden tour last year, their first tour as a line-up since Live Aid in 1985, Ultravox decided to strike while the iron was hot and tour again under the moniker Return To Eden 2. Now last year Ultravox fans thought this might well be a belated swansong and so spared no expense (well, hardly any…) in following the band around the UK. I did three gigs and enjoyed every one of them, but this year decided that one would be enough, and with the 100 Club performance of PF3 and Messengers (see here: http://www.myreviewer.com/default/a128257/The_100_Club_pregig_gig_Event_Review) looking rather special, it was the long trek to London and the Hammersmith Apollo for me this year. 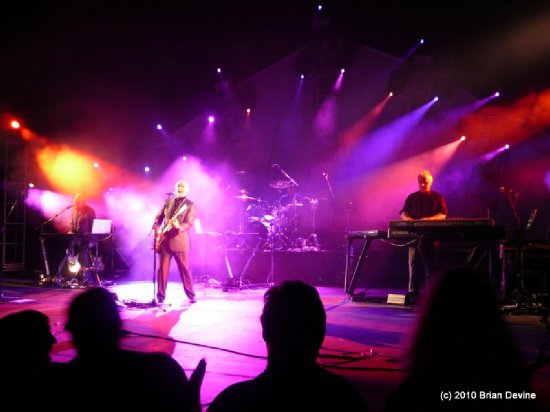 A slight delay in leaving The 100 Club and doing my chivalrous escort bit on the Tube, meant I didn't reach the Apollo until just after 2000 hrs but whilst the non-electronic support was on, it gave a few of us time to catch up again outside the venue prior to heading in just before the 'Vox took to the stage. I've not been to the Apollo before but it's a pretty intimate venue with the stalls not too crowded and enough leg room for everyone to stand up and dance, which happened virtually as soon as set opener New Europeans started. This was a change to last year where instrumental Astradyne was used as opener but I think that may have been to allow the band time to get into the swing of things after so long away. This time the set opened with a bang with few pauses or breaks.

The stage setting was also different from last year with the rather disappointing video screens from last year vanquished in favour of a rather nice sheeted backdrop behind some lighting rigging. The lighting was very well designed and the only projection that I can remember was the ubiquitous horses head logo during Rage In Eden. 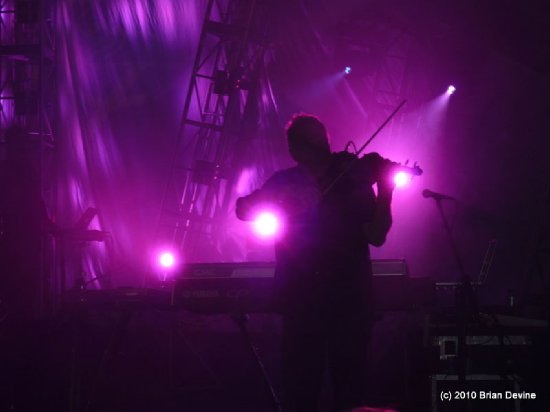 This wasn't the first gig of this tour but it was quite obvious that the band had learnt a lot from the previous tour as everything just seemed to click into place and seemed even tighter as a unit, and they were pretty tight last year. Above all, it really seemed as if they were really enjoying themselves, which was a nice sight to behold, and actually playing off each other rather than playing their parts. Midge Ure in particular seems to have found his niche, his best work coming with collaborations with others in my opinion, and he can't ask for better people to play off than Warren Cann, Chris Cross and Billy Currie. His vocals were as powerful as back in the day and his guitar must have been close to melting, his solo's blisteringly hot and a reminder that he doesn't really get enough credit as a guitarist. 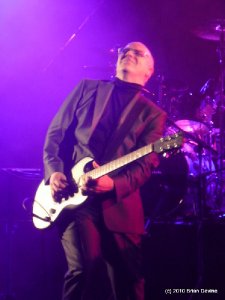 The setlist was virtually the same as last year with the tracks mixed up a bit. What still amazes me even now is how tracks like I Remember (Death In The Afternoon) and One Small Day become even more powerful when played live, the latter is not a particular favourite of mine but there's just something about it that pulls you in when played live. There were new additions too in White China, Love's Great Adventure and set opener New Europeans. No one minded though as everyone sang along to virtually every song and I nearly lost my voice several times. Now adding three new tracks would normally mean the removal of some but luckily only one was dropped. Sadly it was Your Name (Has Slipped My Mind Again), which I thought was one of the highlights of last years set. I would have preferred the loss of Lament, but hey, you can't have everything…

Chris Cross was as nonchalant and relaxed as ever, whilst Warren Cann seemed to be enjoying himself even more than last year, if that is possible. He got to stand up a few more times this year and his vocals on Mr X were clear as crystal compared to the tour opening last year. I did think he might just fall over though when stretching across his drum kit to whack the cymbals during Love's Great Adventure.

Billy Currie, well what can you say about the maestro? His playing really was sublime albeit it with some exaggerated arm movements that were last seen in my car when playing air synth; not to mention the John Travolta Saturday Night Fever-style arm held aloft between bars that was both amusing and endearing. On the plus side, he seemed to have nailed the opening to Astradyne this year but still managed to get slightly lost further in - this just added to the appeal though as I know that it's a hard part to play and also I'd rather a human was playing than a robot. Besides, his overall playing was exceptional and he still got plenty of applause for his violin playing, coming to the front of the stage again rather than staying behind his synths. Biggest thrill though was when he let loose on the synth solo's, particularly Sleepwalk. There is nothing better than a screeching Billy solo… 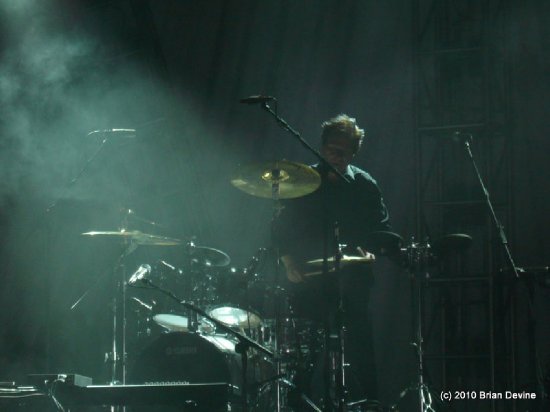 Now I can't really say anything else without mentioning the extremely appreciative audience, who really made the place rock. I know I wasn't the only one singing as the crowd noise really bounced off the walls and seemed to just egg the band on even more. We got to do our bit during the monstrous Hymn where Midge practically allowed us a full chorus to ourselves while he just stood there grinning. There are times that you just know that you've been a part of something special and Ultravox live is one of those times. It was much the same last year but Hammersmith Apollo on 11/04/10 just cranked it up to 11 and transported us all to a time and place we never thought we'd be a part of again.

The last two tracks of the night, part of a three song encore, were favourites Sleepwalk and The Voice. Sleepwalk was a superb example of the heavy metal with synthesisers that was the Ultravox trademark whilst The Voice is the perfect live track with the legendary (to Ultravox fans anyway) drum finale that involves all four band members. Last years finale seemed a little shorter than of yesteryear, maybe due to age catching up on the band, but they seemed to have regained some of their youthful vigour by seeming to extend it to the original run-time. Fantastic stuff and a brilliant end to the night. 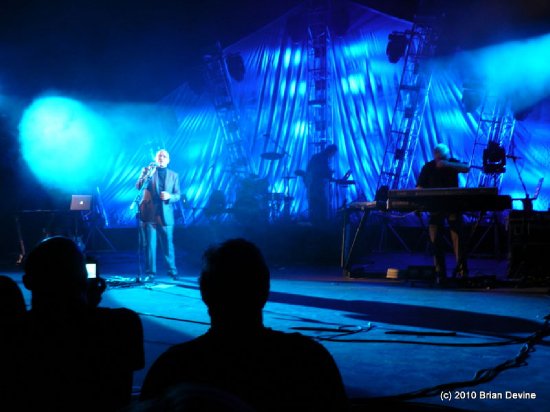 I haven't really found this with any other band and make no apologies for this either, but listening to Ultravox takes me to another place emotionally and I was on in musical heaven during this performance - it just doesn't get better than this.

Superb venue, superb band and superb music. What else can you ask for?

Nice review Si. I liked the sentiment "...transported us all to a time and place we never thought we'd be a part of again".

As you know, I never really recovered from what felt like a double-blow of John Foxx departing and then, surely not, the un-stylish, mustachioed singer /guitarist from Slik turning up and taking the pole position in the band. as a result I never had time for the second incarnation of the band, though maybe that prejudice meant I missed something that others clearly found.

Whatever ...too much blood under the bridge since then. Great that you enjoyed the gig as much as you clearly did. It's what it's all about!
posted by Stuart McLean on 15/4/2010 19:50
I've now done Ultravox four times in the last year and I can honestly say that whilst we can argue about better performers, technically or otherwise, I have never felt the same kind of connection as I do when listening to the 'Vox.

I think there probably was some prejudice there, I understand it with the Slik connection, but Midge Ure does have some pedigree - turning down a spot in the Pistols, in the Rich Kids with Glen Matlock, touring with Thin Lizzy and then founder member of Visage.  There's some pedigree outside of teenybopperville, although admittedly not everyone would have known - I didn't but then I was only 12 when exposed to them...
posted by Si Wooldridge on 16/4/2010 09:56
That 'pedigree' all felt horribly like bandwagon jumping to me. Which is why I felt affronted when he took over Foxx's position. However - it's clearly a prejudiced view that I am not particularly proud of!
posted by Stuart McLean on 16/4/2010 21:07