Blu-ray
You Only Live Twice
Tags For This Item
Belfast Empire, Event, Hotter Than Hell, Kiss 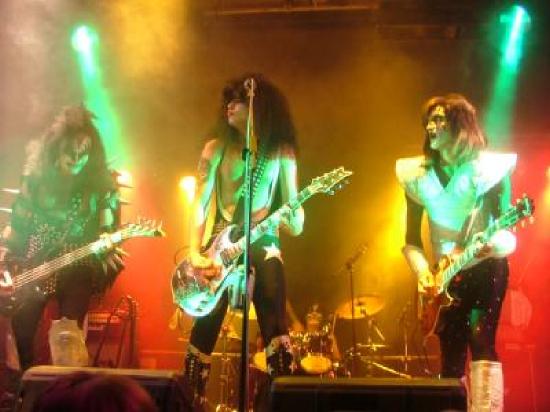 Screaming guitars, thundering drums, and earth-shattering bass might all be quintessential elements of rock'n'roll, but there's nothing quite like being cut off by "the man".

But unlike The Beatles' infamous roof-top performance in 1969 - where the police brought a complete end to proceedings - the warnings of Belfast's Fire Department were only to shut down KISS tribute band Hotter Than Hell's pyrotechnics, after they set off a silent alarm at the Belfast Empire on Saturday night.

Despite that meaning no fire-breathing "Demon", the band - who hail from various corners of Europe - still put forth a tremendous show, proving that even the flamboyant stage act of KISS is still really all about the music. Opening with the classic "Detroit Rock City", the band worked their way through their idols' most famous tracks, including "Strutter", "Shout It Out Loud", "I Was Made For Loving You", and "God of Thunder". They even stepped out of KISS' make-up period for two tracks, "Heaven's On Fire" (from the "Animalize" album) and the sing-a-long "Crazy Crazy Nights" (from "Crazy Nights").

There were brief pauses in the band action for solos from each member, as well as several interchanges of lead vocal talents, the most stunning of which came from the "Catman" (drums), as he not only delivered a spine-tingling version of the ballad "Beth", but also hit the skins while belting out a rendition of another fan-favourite track, "Black Diamond".

Concluding with the always-raucous "Rock And Roll All Nite", the band played a full two-hour set, which left no-one disappointed in terms of setlist or performance. The group themselves may have had their pyrotechnic plans spoiled by factors beyond their control, but they still delivered a show that will no doubt see them sell out once again, when they return to Belfast at Hallowe'en.